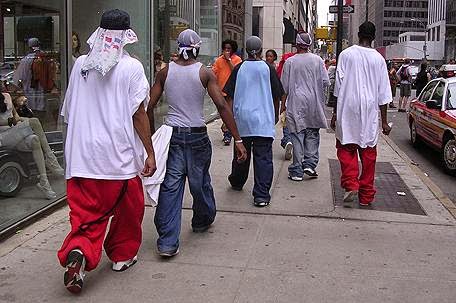 Didn't get much comment, or much review of my blog yesterday.  That's okay...it was a pretty brutal condemnation of the "monkey class"...those thugs that dwell in the ghetto and feed off of evil and cruelty.  I don't apologize a bit....in fact I'm doubling down today.

Ferguson, Missouri is still a mess.  City, County, State and Federal Law Enforcement haven't come up with a solution to end the violence.  And they won't, because like much of America, they look at these thugs, then look the other way, quaking in their boots that they might be called racist for calling a spade a spade.

And this is part of the problem; as long as we give these hooligans a welfare check, hold them to no standard of human behavior, and best of all for them, ignore their savagery, the savagery will continue.

How many of those thugs give one grain of shit about the death of Michael Brown?  None.  In fact, had the cop not brought the thug down,  a fellow thug would have gunned him down in the street at some later date....and no one would give a damn.  One only needs to look at the two or three dozen Black on Black murders on Chicago's south side every weekend to see how little Barry or Al or Jessie care about thug death.  You have never seen Eric Holder showing up in Chicago asking for a "bonus autopsy" or a federal investigation!   The Black motto is "We Be Shootin Our Own!...honky, even in a cop uniform got no right!"

And those 60 IQ thugs are so stupid, and their lust for looting and violence so massive, that they can't even pretend to care, to be a "sympathetic victim".  And White America looks on, open mouthed, aghast at a dozen thugs looting an innocent business person, then turn the channel to watch Glee or NCIS, and bingo!..the problem goes away for them.

I guess one small sliver of good is that these thugs are at least partially "policing themselves" as they gun each other down by the thousands year in and year out.  Maybe that's why so few speak up...as long as they're killing each other they're leaving us alone.

The thugs don't want to see me be "dictator for a month".  I'd "martial law" the hell out of every ghetto in America and I wouldn't put up with this crap for a single night.  Deploy the military, call out the national guard and gun down these sub human bastards until blood is running in the streets.  There's not enough prison to house them all and we'd be far better off.

Sorry if I again offend your sensibilities but I'm damn tired of fifty years of coddling and ass-kissing and providing excuses for this Black savagery.

Good morning,my friend, I never miss your blogs but sometimes resist comments because, well I just don't know what to say! I hope the rain in Arizona has not hurt you, your family or property!
Yes, easier to watch Glee or anything than deal with the news these days. I am appalled at the militarization of our police, unless, of course, I needed them! then I would want even more! What I am really seeing in Ferguson is the very thing I see all over the world. Policing and government only works by the consent of the citizens. On average it is just one policeman per 1,000 citizens and no matter how well armed it will only work when we agree to it. Yes, I watch the hooligans and wonder what the hell they do for a living? and it reminds me that Conservatives need something worth conserving. When a person has nothing to lose there is always trouble. There are so many books out there about how societies work and what makes them fail. We just don't read them anymore. As a side note, it always amazes me how rioters destroy their own nests?

I was telling a good friend on Sunday how I wanted to be dictator for a month or so, I like the way you think.I would take all the ghetto thugs and give them Detroit and let them keep it, new security wall and all.(like Escape from New York, without the escape)About yesterday:the illegals can have New Mexico instead of California, New Mexicos' state constitution is already written Spanish. Since cleaning up the countries problems will only take a month, do you want the first two weeks or the final two?

Good morning, Jerry. We're doing fine over here in Arizona. We don't live in a flood plain as some folks do, and we don't drive into flooded streets as dozens of our local doofuses do every monsoon storm.

I have four missing roof tiles and a six foot length of trim that will have to repaired in September when Monsoon season is over...nothing new as it happens every year when we get a microburst...one of those sudden and violent windstorms that precede a monsoon storm.

I have no doubt that what is happening here, and around the world, is due to our citizens allowing it. That spurs much of my anger...whether it be voter participation or permitting Black thuggery. As to nest destruction, I kinda understand it. When you haven't worked for something, we you haven't earned it, and when you know Uncle Sugar is gonna come along and rebuild at taxpayer expense, then looting and burning is the way to go.

I guess the problem with me these days is that I have an extreme case of shell shock...just can't believe how badly this President and his minions are managing things. Every month I get a new surprise. Praying for numbness here..praying hard.

Hi Craig. I have some very bad news for you...California is already Mexico North, so too late to salvage your state.

Please let me take the first two weeks, then you can have it...but I don't think there will be much for you to do....:)

You hit the nail on the head for me. It's the same way I feel about the Muslims. Let them kill one another off. Why waste good money doing it? It's the "Last Man Standing Theory". They don;t want us "messing" with their lives, then leave them alone. That's what Government has decided to do. Be damned if you do, damned if you don't. You'll never clean the Ghettos up. That's the definition of a Ghetto. As long as they stay in their own area, killing their own, looting as such, then let them be. If you want to own a business in those areas, it's your risk as a business Owner. You know what you're getting into. As opposed to the Hispanics, who want to expand everywhere in the US, and truly want it back so they can turn it into one big POS like Mexico is(and much more dangerious to the future of this Country), the Blacks just want everyone out of their business(except for the Government check)...

Wow! That's a bit strange...Are my excessively long comments not comming through the cyberwire? Coulda swore I sent one to this blog yesterday. Actually I loved the psssion you spoke with yesterday and today as well. I wish the folks in D.C. would speak with just a fraction of your conviction and volume, we might not be in the deep hole we're in. Ah but alas my comments are flying around in cyberspace somewhere never to be heard........

Frank, re Mexicans...my home town in California went from 20% Hispanic to 80% Hispanic in two decades.

So yesterday I'm reading the online version of my old home town paper and there's a letter to the editor from this Mexican who said "we need lots and lots of murals on all the buildings in this town".....chilled me to the bone. As if all the graffiti and the three cars parked on the front lawn weren't enough, this Mexican wanted to make my formerly lovely little small town "more like Mexico."

Good morning, Ken. Yes I read your comments yesterday. I was just commenting that no one else chose to comment. To some I guess my comments were racist.

Or maybe they were just very busy yesterday. :)

Thanks for making my point for me, Your "cute" little town in California is toast. I live in a fairly big town in Northern California(Santa Rosa) and I'd say 2 out of 3 faces I see on the road are Hispanic, they seem to be civil. Maybe truly trying to get away from the Mexico they left? We'll see. Time will tell...

I'm not sure what you expect people to write. America is changing and it's never going back to what it was 60 years ago. We see the violence wrought by the thugs and brag about "what needs to be done"... dream on, my friend. This country is different now, from the leadership on down. Truth is, there will not be violence used by the average guy to stop this - and if that happened, the power of government would be used to punish that person in ways that will never be employed against the po' black man. Be damn glad it hasn't gotten to where you live, for should that day arrive, you may find the talk is easier than the walk. History shows us that nations become weaker over time - the only time a nation becomes stronger is when a strong man arrives on the scene and forces that country to the right. Left alone, every empire has rotted to the point of destruction. Our country will be no different and it's happening now. The ugly reality is the scum rioting in MO is merely a symptom of a disease that is far more advanced than any of us wants to admit. Buy guns, ammo, food, and medicine, but understand these things will delay what is inevitable. Do you really believe some politician is the answer? ANY politician? Sorry to be so defeatist, but that's how I see it (and the Bible is clear about what is coming for this world, we can't stop it, and the US isn't a player at the end of man's time on this earth). Preach to the choir if it makes you feel better, but the lone voice in the wilderness is exactly what folks like us are.

Some days I feel just like you, Randy. But I can't stop speaking out....when I do then I lose my own soul.

And I've studied history enough to know that seismic shifts in public sentiment do occur so there is always room for hope.

As to "easier to talk the talk than walk the walk", well, Randy, all I can say about that is that I my batting average is pretty good with both so far. I've never backed down from a fight, metaphorical or otherwise. I've lost a few folks that I thought were friends from time to time, for the stands I take, but nothing that of value there.

You will never see me on the sidelines when I see someone being bullied and hurt or ever failing to speak up when I see that something that's wrong.

What good is life if you live it as a sheep?

Had not seen it before, Craig. Don't think his opinion is much different than many millions of us. The Blacks are perfectly happy with a "hanging mob" and they know damn well their dead thug was wrong. Just another chance to jab at Whitey.