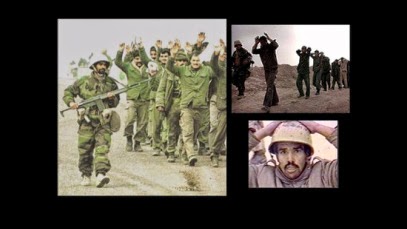 Anyone old enough to be around during the Gulf War surely remembers Saddam's elite Republican Guard surrendering en masse out there in the desert.  And why not?  After weeks of allied bombing and pin point tank strikes, Saddam's forces were, to say the least, a bit shaken.  (These are same supposedly mighty brutes who slaughtered millions over Saddam's tenure).

So when allied ground forces moved into Iraq they plowed north like a knife through butter and stopped at the outskirts of Baghdad within a very few days.   Why George H.W. stopped and withdrew before toppling Saddam is one for the history books.  (I still believe his Dad's failure to finish off Saddam was a prime motivator for George W. to invade Iraq.)

Not the point.  The reason I cite the Republican Guard's massive capitulation is because it happened repeatedly among Muslims in the Middle East.  I remember arriving in Saudi Arabia during the first phase of the Gulf War...Desert Shield.  Saddam had already invaded Kuwait (whose armed forces also fell down and cowered) and were threatening to invade Saudi Arabia and capture Saudi Arabia's prime oil fields in Dhahran.  Well the Saudi's screamed long and hard and reminded George H.W. that Saudi Arabia had spent hundreds of billions of dollars with American defense companies and it was now payback time.

So American forces deployed to Saudi Arabia, to Dhahran, to Al Kharj, to Jeddah and Riyadh..and began planning to defend the Saudi border and to invade Kuwait and Iraq and drive Saddam's forces back.  I arrived in Riyadh in  late September of 1990 and the Saudi populace were already fleeing to the East, to safer Jeddah, goats and wives in the back of their trucks and hauling ass, even before the first Scud missile hit Riyadh, and just as we were coming in to defend them (another cowering).

When we promptly ended the Gulf War things settled down a bit, and the fun around headquarters involved everyone goggling a copy of the Saudi government's check to the U.S. Treasury.  The amount was $37 billion dollars..so Saudi paid more than their share of the cost of the Gulf conflict.

Then, a couple of years later, I'm walking down the hall of Royal Saudi Air Force headquarters in Riyadh and a Saudi noncommissioned officer stopped me and admonished me for my country's failure to intervene in the slaughter of Muslims over in Bosnia.  I must have been in a bad mood because I jumped all over his ass and said "let me get this straight...you're a Muslim nation, equipped with British Tornado bombers and squadrons of  American F-15's.  You have an army and navy and an Air Force and you want America, a Christian nation, to intervene?"...."why the hell are the Saudi's not jumping in to protect their own?"  The conversation ended right there but the Saudi's thought process was a natural one...they had hired Americans to fight their last war and wanted us to do it again.

So, when I saw the Iraqis tear off their uniforms and surrender their arms and run from the ISIS forces a few weeks ago, I wasn't a bit surprised.  Muslims, both the regular variety, and the Islamic radicals, are no more than bullies...they prey on women and the weak...they attack innocents...but when push comes to shove on the battlefield, they are all cowardly.

And, sadly, we have a President that is equally weak and cowardly.  He has kissed the ass of Hamas, of radicals in Egypt, in Syria, in Afghanistan and Iraq, and is busy kissing Iranian ass in hopes that they'll turn their nuclear into plow shares.  And the Middle East is one holy mess because of it.

I've said repeatedly that I'm against any more Middle East occupations.  Instead, I'm in favor of surgical strikes and rapid in and out deployments using our pre-positioned equipment and supplies on hand in Turkey, Qatar and Kuwait.

Instead, we have a President that keeps extending a hand to Muslims and having it bit in return.  And worse, we keep sacrificing the lives of our brave young men to defend battlefield cowards and domestic bullies, who hide behind the women and children they have not yet abused sufficiently.

If the chicken hawks in Congress want to continue occupying Muslim countries, let John McCain take em out and drill them on the Capitol Mall, climb into a C-5, and go fight those wars themselves...but they better know something; it's gonna be damned hard to find out who the "friendlies" are.  Americans have done enough warring for Muslims.  We should only act when it is in our own best interest and no more than that.
Posted by A Modest Scribler at 2:00 AM

couldn't agree more! and it seems that Obama is listening to you!

Not even close, Jerry. I don't want to be pals with Muslims, and I wouldn't have waited three months before I launched massive air strikes against ISIS as they crossed the border into Iraq.

Even these symbolic air strikes he's launching now are ineffective because they are not be executed with massive force.

No, I'm not talking about occupation again...I'm talking about insuring that we prevent a radical islamic force to dominate the region...massive air power and quick in and out hits by ground forces.

And, finally, I'd be listening to my intelligence community when they warned about ISIS six months ago...it would have been far easier to do battle with them before they gathered in massive force.

And I damn sure wouldn't be condemning Israel for defending themselves and making speeches about how Muslims built this nation.

We have a similar history. I was flying C-141's when we were hauling warriors and weapons to the sandbox. After Desert Storm ended, I was flying north out of Kuwait and you could look down and see the 4 lane road going north to Baghdad - every piece of metal that Hussein owned that had a motor and a gun was on that road, going north. Told my co-pilot: "Gimmie 6 A-10's and 3 hours and we could kill every one of these bastards and destroy his weapons. We're gonna be back, you know it." Obama is a boy when we need a man in the office. Hillary will be next after they turn 20,000,000 mexicans into voters, and she'll be just as incompetent as her predecessor. Like you, stay out of the ME - and let the Israelis do what they know how to do (Actually, since Obama gave the back of his hand to Netanyahu, we don't have much influence there anymore - decisions have consequences, Barry. BTW, how was that dinner you left BB alone for two hours to eat?)....

I am sorry, but I can't help it. I am islamophobic, please, someone, anyone tell me why I should not be! I check the news and it gets worse every day, should I stick my head in the sand and pretend it does not exist? What is next?

Randy, as I recall, when Obummer walked out on BB was just about when I wrote the bastard off for good.

Anon, if you are Islamaphobic, so are around a hundred million other Americans.