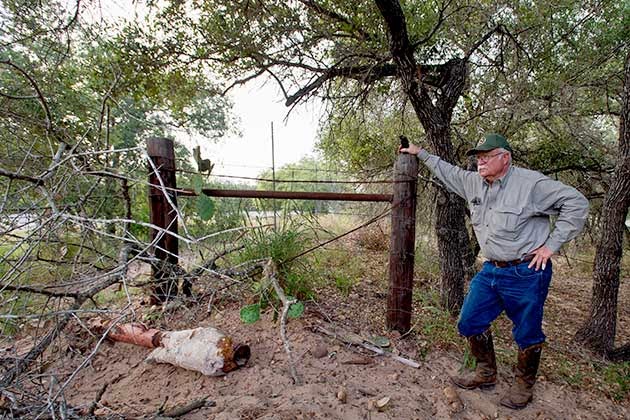 Yesterday I was out running errands and listening to NPR.  The show was featuring a Business Week writer who had done a feature story on Mexican drug cartels.  When he mentioned that over 5,600 remains have been found along the south Texas oil pipelines that got my attention and I did a little digging for you.  Here's what I learned from reading several different sources on this problem....still another problem that I knew absolutely nothing about.  And yes, still more sad and frightening stories from our neighbors to the south.

There are thousands of miles of oil pipelines snaking their way from south Texas oil fields north to the state's heartland.  These many "pipeline highways" run across private ranch land.  So one day last week a rancher was riding back to the house and saw her German Shepherds playing with what she thought was a soccer ball.  When she approached closer she was aghast to see her dogs were playing with a human head...what was left of a red headed woman who was at the wrong place at the wrong time.

This was not the first time this rancher has found human remains.  Sadly, over the last few years she has seen over a thousand of them.   You see, Mexican drug cartels are using these pipelines as both killing zones as well as transit routes to bring their drugs and human offal into the United States.

These many pipeline routes are ideal for the cartels.  The federal government mandates that these ranches must keep a 30 foot wide path along the pipeline vegetation free so that pipeline maintainers can easily access the area should they have a line break.  It also makes it easier to monitor the lines by aerial coverage.  So the feds mandate that the ranchers mow and clean out the area.

The drug cartels and Mexican invaders love it.  They have a clear path to move through the area quickly and they have now claimed these pipeline highways as their own.  Anyone who ventures into the area is a dead man.  The Border Patrol says they don't have the manpower to cover all the private land....they are undermanned and overworked, these days changing diaper and warming baby bottles.

But the Border Patrol does respond to the findings of dead bodies along these routes.  These days they find one a day and over the last few years have found over 5,600 bodies.  The BP speculates that there are far more murders than even these frightening numbers, more than all American deaths in Afghanistan and Iraq combined.  The BP and the ranchers say that perhaps thousands more are killed
and never found as they are eaten by wildlife or buried before they are discovered.

The government of Mexico does not care..the longer a drug smuggler stays in the U.S. that's time he's not killing innocents in Mexico.  And certainly the President of Mexico is pleased to send hundreds of thousands of the most poor, or the most violent swarming into the United States.  And Mexico continues to be one of the biggest recipients of U.S. foreign aid so Mexico sees no incentive to do anything about the problem.

We could stop this folks.  We could halt all foreign aid to Mexico until they begin minding their own border.  And we could deploy 50,000 of our military along that 1600 mile border with Mexico with orders to fire at will at any illegal breeching our border.  The invasion would stop within a month.

Sadly, we won't....and the Highway of Death is getting deadlier every minute.

You don't really have to shoot anyone. Only 2 things would solve this problem. #1, no free stuff for illegals and #2, minimum $25,000 fine for hiring them...even for mowing your lawn!

Too hard to enforce, Jerry...easier to shoot.

I have always liked these two ideas: A high powered scoped rifle and free ammo to volunteers who wish to protect the border, motion sensors connected to automatic weapons(.30 or .50 cal) for un-manned border security.

Shoot the people who hire illegals?

Craig, I like your idea...and Jerry, yeah, that's all good too. I'm in a shooting mood these days.

I'm sure there's so much more we never even hear about. The solutions are very simple, as you state. No foreign aid to countries that don't comply with simple rules. But simplicity is something our gov't does not do well. Besides, the US can't afford to give away ANYTHING, given our own financial state!

True, Carol. If we actually had a President, one that believed in the sanctity of our borders, instead of cutting our military by 166,000, he'd deploy them to our border.

What we would save in reduced welfare payouts, prison costs, would more than pay for keeping those troops in our military.

True! Funny, how simple the solutions are. But, as 'regular' citizens, we are not influenced by greed.

Tell me. Who are the Cartels killing? Maybe they're doing us a favor. Could be future Government Suckers, Rivals(if they kill one another, someday there will be only one left)or if we're lucky, maybe they'll bag a Pelosi or Feinstein someday. We can only hope...

Jerry is right about the effect of cutting off taxpayer money to illegals, but the problem is actually much simpler (and sadder): The President and Congress have, as their primary concern, the goal of maximizing political support, not enforcing the law. You see it everyday now: The characterization of illegals as "refugees", the constant bleating about concern and compassion for those that break our immigration laws with impunity, a direct result of Obama's pledge to "solve" the "undocumented person problem". The pols sense political advantage to be had, so to hell with the law! Now, if you or I try that (say, sending in to the IRS an amount we think is reasonable and justifiable vs. what they say we owe), we get the lecture about "following the law" and the promise of prison time and asset forfeiture if we don't comply. Remember, there are two sets of laws, no matter what the parasitic prostitutes known as politicians say. And that fact is killing us as a nation.

Frank, I think the killing is pretty much indiscriminate; ranchers, illegal immigrants traveling without a coyote, illegals whose family failed to pay the fee hike.

Randy..sure Jerry is right, but like all federal initiatives, it won't work that well. It would please me immensely to see employers fined, and fined big! And it would go far in solving the immigration problem. But it's not enough. An illegal can come here, breed a few anchor babies and earn enough in federal benefits that far surpass what he would make in Mexico. And here in Phoenix they hit the food banks pretty damn hard, and any other charity that is passing something out.

We first need a President that will protect our borders and we need to amend the 14th Amendment, and, yes, we've got to militarize the border and use deadly force to stop the invasion.

And, from reading my blogs, you know i'm in agreement that we've got to re-establish ourselves as a nation of laws..and it won't come from the outlaw living in the White House.

Carol is right. I agree with Jerry to, but we need to build two fences with a 50' gap. If the illegal jumps the first fence he'll be ok, but as soon as his head breaks the plane of the second fence then he recieves an accurately placed .223 or .308 round in his dome. Of course there would be plenty of warning signs (in spanish and English) on the mexico side of the fence and on the last fence they would ever scale.

Except for our token liberal, Jerry, we are indeed a mean bunch, Brian. ;)

Right on Brian! I love this plan. I'd volunteer for this duty myself!

Mr. Scribbler, You know how I feel about the illegals. The first notion that fining the employer is the best idea is something I just hate. I'm an employer. I do check backgrounds to the best of my ability and pay generous wages and benefits. The documents I find at times are made by a street vendor and DO look very similar to govt issued documents. When we speak of punishing people lets please stop going after the employers first and go after the person who benefits greatest, the fucking politician, (obama, jerry brown, etc., etc..) When those criminals start actively enforcing our laws and throwing these filthy bastards out, closing our border, then yes, go after the employer, I'm then in full support.

It has been quite obvious for many years that our biggest enemy is the govt of mexico. They are supporting the disposing of all their most unproductive, ignorant and costly residents. Sending them north is has been quite the boon for them. Now the blond blue eyed pretty mexicans can enjoy a clean country where an intelligent conversation can be found finally. Really, though, I have been bitching and moaning about this invasion for some time now and watched along with the rest of you, the full and complete destruction of our once great country by this invasion. And it just keeps happening. I am in full and complete support of shooting all that cross our borders illegally(the fucking mexicans do it on their own southern border)! Then entering the homes of illegals all across America. When the occupant can't supply proof of citizenship for all residents they will be immediately transported to the border, if they resist they will be shot.

Our country has been invaded and continues to be overrun folks and the problem is no longer a serious one, we have passed that long ago. We are at a place we may never recover from to what we once were, but the solution needs to start immediately with complete resolve. It never ceases to baffle me how this invasion and destruction of our beautiful country has been allowed to go on for years and sold to us as OK...WTF is wrong with us?!?

All true, Ken, and all sad. Let's hope and pray for a transformational figure who'll come along and save us because we seem to be too fat, dumb and lazy to save ourselves.

You also mentioned taking up arms against our neighbor to the south. I wonder if that would flush out some interesting enemies. Specifically China. Not long ago we would not allow anyone investing or moving any of their chess pieces anywhere in the southern regions. China has now, thank you jimmy "the useless" carter, introduced themselves in a big way all over the south as well as Russia and Iran. It is China I consider to be the biggest threat here. They have placed themselves heavily into mexico, building them infrastructure, lending them great deals of money, etc.,etc.. We have stupidly been allowing our leadership to cut our throats all in the "capitalist interest" of our country only to hand any profits over to the mexicans.
Surely seems as though there has been no shortage of stupid in the white house during the last three administrations (clinton, GW Bush and the current asshole) and carter as well. Wow, we are a mess. My Mom always said, "If you can't say something positive...". We've all heard it. Just never seems to be anything positive anymore!

Once again, to quote a good friend,"Sad, Damned Sad".

I want to shoot too! Just not exactly sure who nor how many!