Toeing The Liberal Line..or Else! 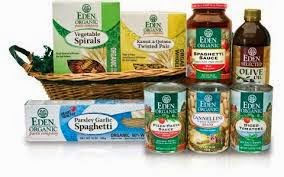 These days you can have all the personal rights you want...as long as you toe the liberal line and embrace the liberal agenda.  Go against them and the liberal brownshirts will punish you severely.  There is no longer room for alternative points of view.

Eden Foods is quite a wonderful food producer.  They are dedicated to producing healthy organic foods for the American table.  But Eden Foods is guilty of the same crime as Hobby Lobby; they won't fund abortions as part of their healthcare plan.

So the liberal brownshirts are punishing them severely.  They have pressured grocery co-ops to boycott all Eden food products and many of the co-ops in San Francisco and New York City and other liberal bastions have fallen in line and stopped carrying Eden Food products in their stores.  The "brownies" are also writing Obama to ask if his FDA Czar can't do something to stop Eden Foods from doing business in America.

On another front, last year gays in Denver filed a suit against a Christian run bakery that refused to make a wedding cake for a gay wedding.  Thousands of gays crawled out of their holes and descended on the Denver bakery and harassed anyone who tried to go in to the bakery.  The bakery closed down late last year....out of business because they didn't believe they could support gay marriage.

Then, this week Cynthia and Robert Griffith, who host weddings and wedding receptions at their bucolic New York farm.  Both Christians, the Griffiths were approached to host a wedding and a reception at the farm for a female gay couple from New Jersey.  As a compromise, the Griffiths agreed to host the reception but didn't feel their religion would allow them to host the wedding.  The two gays took the Griffiths to court and one of the thousands of America's liberal judges fined the Griffith's $13,000 dollars and ordered them to host the wedding ceremony.  The Griffiths decided just to close their business because their Christian beliefs won't allow them to go against their religious teachings.

A couple of years ago Arizona, who had Christian businesses under assault by the LGBT crowd, passed a law that gave businesses the right to refuse providing a service if it went against their religious beliefs.  The law passed the Arizona House and Senate but didn't make it through the ultra liberal 9th Circuit Court of Appeals in San Francisco.  The liberal minions there shot it down...ruling that gays have the right to demand service even if that service goes against the personal beliefs of Christians.

If your skin color is Black or Brown, you're in.  If you like to cross dress at work, hey you're protected.  If you're "queer in the rear" that's all good too.  But God help you if you are still clinging to some outmoded Judeo-Christian ethic....you will be punished severely.
Posted by A Modest Scribler at 2:00 AM

Dearel, this is nuts! Unless you are selling me something I don't "Block" anyone, certainly not for any political persuasion, as you know I like a good argument! can I give you a different email address?
slate2235@gmail.com try that one, please! I want to get the jam, with no political content, in Tuesday's mail.
About today's post: This is why I am against "power to the people" and am in favor of rule by law and individual freedoms. Sometimes "the people" just get it wrong!

Jerry, I'm getting my email normally (including yours) so I suspect the problem is on your end. Just sent you a new email this morning to your alternate address you provided here.

The only email I ever block is spam and even those show up in my trash file for review so the problem is definitely on your end.

Let me know if you receive my latest email.