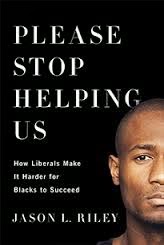 In the summer of 1865, as America was still licking her wounds over Lincoln's assassination, the North was giving serious considerations about what this country would do with those tens of millions of Blacks they had just fought a war to free from slavery.

The greatest Black spokesman of his day, Fredrick Douglas, would provide an answer to the question "What shall we do with the Blacks?"..."Do nothing with us!", he said.  With those four simple words, Douglas was saying Blacks should be treated no better nor worse than any other man.

I recommend the book highly to anyone who wishes to gain an insight on how liberal Democrats have kept Blacks down on the liberal plantation for nearly four decades.  The book is only 184 pages and hits on five or six hard truths about misguided equal opportunity and poverty programs.  Riley seems to equate those programs to training wheels on a child's bike; perhaps once needed but are now confining and enslaving.

Riley cites the liberal's extreme efforts to go soft on crime that perpetuates the urban ghetto.  He says liberal laws and liberal judges passing out probations and liberal sentences for some of the most heinous Black crimes only fouls the cesspool of the ghetto even more.

He says the liberals embracing of a failing public school system, combined with their incestuous relationship with the unionized teacher's lobby only insures that Black education will continue to be a failing proposition.  He argues that charter schools and real school choice is the only way to make the public school system an honest broker, and spur reform for a failing system.

The author also presents the best argument yet as to why the mandatory minimum wage crowds out opportunities for Black youth and why the Black youth unemployment rate exceeds 30%, five times higher than the overall unemployment rate, and more than twice as high as the next highest ethnic group jobless rate.

And in the "you learn something new everyday" vein,  I learned how minority quotas actually result in fewer Black college graduates.

A Black conservative columnist, Walter E. Williams had this to say in reviewing the book (excerpt):

While reading the first chapter of Jason Riley's new book, "Please Stop Helping Us," I thought about Will Rogers' Prohibition-era observation that "Oklahomans vote dry as long as they can stagger to the polls." Demonstrative of similar dedication, one member of Congress told Vanderbilt University political scientist Carol Swain that "one of the advantages and disadvantages of representing blacks is their shameless loyalty. ... You can almost get away with raping babies and be forgiven. You don't have any vigilance about your performance." In my opinion, there appear to be no standards of performance low enough for blacks to lose their loyalty to their black political representatives.
Riley says that between 1970 and 2001, the number of black elected officials skyrocketed from fewer than 1,500 to more than 9,000, but black poverty has remained roughly the same. Between 1940 and 1960, when black political power was virtually nonexistent, the black poverty rate fell from 87 percent to 47 percent. Riley points out that there has been significant achievement among the black middle class but that wide black-white gaps remain with respect to income, educational achievement, unemployment, labor force participation, incarceration rates and other measures. Despite political gains, there have been dramatic reversals in teen unemployment, crime, out-of-wedlock births and family stability. Political power is neither a necessary nor a sufficient condition for socio-economic progress..........

Liberals are already jumping all over Jason Riley.  Cries of "Uncle Tom" and "White Man's mouthpiece" are being heard all over the liberal kingdom.  It doesn't appear that liberals are willing to learn a new thing under the sun.
Sad.  Damned Sad.
Posted by A Modest Scribler at 2:00 AM

Only an idiot doesn't realize that our system is broken. I am hoping that Liberals, Conservative and the extremes of both parties might be willing to learn something new.
and maybe put down the battle axes long enough to discuss it.

Ending all the free social benefits would have one major benefit beside the benefits of lower crime rates lower unemployment better education: A huge amount of freed up money to use on a border fence.Wow win win for the country.

Unfortunately Craig, the Government never goes with win/win. It makes too much sense. And they never have a lick of sense. Everything they do, think, and act on is for their personal gain. Not the people's. Now, that's sad. Damn sad...

No chance this will ever happen. More than 50 years ago, the Dims figured out how to insure blacks ("Negros" then) would become a reliable voting block - Simple two-step process: 1) Declare them "underprivileged and needing assistance from government" and 2) proclaim the Dim party as the ones to provide it. It worked to a degree even the architects of that strategy couldn't have predicted. Today, blacks vote over 80% Dim in every election. Good news for Dim pols, but if we look at the black population, it has been absolutely decimated both by government handouts and their own choices (fostered by government). Illegitimacy is over 70%, single-parent (i.e. NO FATHER PRESENT) households are the norm and have been for more than 20 years. The rates of drug use, school drop-out, incarceration, and early death are the highest for the blacks, more so than any other race. Blacks that do not fit into this dreary scenario are labeled as "Uncle Toms" or "Oreos", despite their lives being markedly more normal and successful than the plantation-mentality, low-info black that exists on government handouts, living in taxpayer-provided housing. You see it in the election of pols like Maxine Waters, Sheila Lee, etc. - each, perpetuating a stereotype that has firmly taken hold because it is more true than not. Men like Alan West are targeted because they have the backbone to stand up against the prevailing culture, a very dangerous thing to the Jesse Jacksons/Al Sharptons of this country. No, blacks have chosen the path they are on but that isn't to say it will always be this way. If Obama grants amnesty to 20,000,000 mexicans (and it stands), the most favored minority status of the black will be jeopardized by the emergence of a new minority that will have the sheer numbers to rival the blacks at the voting booth. Mexicans have a work ethic (and a devotion to Christianity) notably absent in the blacks. THIS will be interesting to watch.

I'm really enjoying the active discussion going on today between our readers. Thanks, folks!