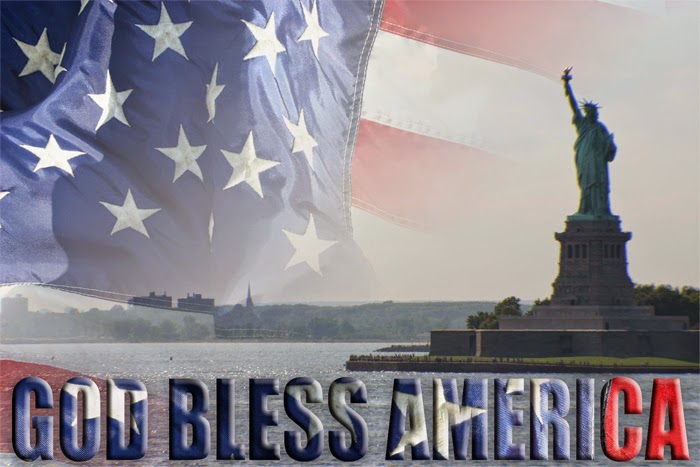 You can like America.  You can be glad you live here.  And you can love America.  But I don't think you can fully appreciate America unless you were forced to live away from her, or if you came here from somewhere else.

That's why I've always advocated for a generous legal immigration system.  Immigrants come here and bring with them their own version of the American dream.  Americans, having lived here all their life, take America for granted.  Oh sure, we occasionally fall in love with her all over again...usually when she's been hurt or threatened;  Pearl Harbor or 9/11.

But America needs to have her blood refreshed every 20 years or so.  We have to see Vietnamese boat people arrive on our shores and open up little family produce stores, or nail salons and marvel at their children as they score perfect SAT scores and win scholarships to Cal Tech or Harvard.

We need the folks like Maria and Jose who came here legally and turned a food cart into a successful and much loved restaurant.  We needed the Chinese to build our railroads and we needed the Japanese to harvest our crops in California and Hawaii.  And yes, we need the work ethic born of desperation, to pick our lettuce and our cucumbers and our peaches.

We enjoy a richness of the palate not seen in human history.  We devour Cuban sandwiches and Nigerian stew and English fish and chips and Tex-Mex and wash it down with Irish brews.  And all of that makes us the melting pot that we are.

We intermarry and become mongrels and the Europeans look down on us with utter disdain; barbarians who simply refuse to embrace a class system.  And yet, those same "barbarians" have saved Europe twice and rebuilt her after a great world war and sought no territory or reward.
When the French were running back to Paris, when the English were retreating back across the English channel,  Americans were gearing up to save the day.

And we "mongrels" don't back down.  We whipped the most powerful nation on earth to win our independence, defeating a force ten times our size.  We fought a great civil war to decide whether we'll judge a man by his skin color or by his character.  We refreshed our legend at the Alamo and the Argonne Forest and Pork Chop Hill and Khe-Sanh and Baghdad and Mosul and the mountains of Afghanistan.  Americans do not turn and run...we fight as long as we have the means to do so.

But all of our great legacy fades in the day to day rites of work and living.  On the 4th of July we grill burgers and sip beer and shoot up fireworks and rarely give a thought to how our independence was won and how it has been maintained.

So we need those immigrants.  We need a fella who immigrated from Sicily in 1903 and cried tears of joy when he passed the Statue of Liberty.  He would grow up in the poorest section of New York City and work his way through college by playing a mandolin and singing Italian folk songs learned in his youth.  He would go to work in the movie industry, learning every facet of movie making, and make movies about America at her best.  "Mr. Deeds Goes To Town", "Mr. Smith Goes to Washington".  He would enter the military at age 44 and make a series of films called "Why We Fight", an academy award winning documentary about World War II.  When the war was over he would come home and make "It's A Wonderful Life", a celebration of the importance and value of a single life.  Yes, we needed Frank Capra.... immigrant.

And we needed someone to tell the story of what it was like for our men when they came home from World War II.  We needed to see the adjustments that need to be made after coming home from a world of savagery to the warm cocoon of family.  So we needed German immigrant William Wyler to tell the story of America at mid-century with "The Best Years Of Our Lives."

And we needed a squat little Russian immigrant to come here and write the songs that would stir our souls and warm our hearts and remind us just how beautiful this country is.  So Irving Berlin wrote "God Bless America", a song that still raises the goosebumps on our arms when we hear and sing it.
And, having lost a precious son on Christmas Day long ago, he sat down and wrote "White Christmas" and reminded all of us of the glory of hearth and home and family.

I've lived away from America for many years.  Each time I returned I could see skies more blue and the air refreshed with the very essence of freedom.   We need that story to be told over and over again....and we need immigrants to tell that story....to remind us how very fortunate we are to live here.
Posted by A Modest Scribler at 2:00 AM

Quite the inspirational and inspiring blog today.A lot of people forget we are all immigrants,except for the Native Americans. It seems after a few generations some lose the despair and embrace entitlement.

Still another one out of the park! It is important to remember "We are a melting pot"! We are not a hyphen!! That political correctness is so destructive to us all. Thank you for this at the very least, inspiring piece of writing. A jolly good show!

As always, thanks, Craig. Have a great week!

You almost got it right - we need immigration IF AND ONLY IF there is assimilation. People that come here from another country, but refuse to discard their original country's ways of doing things (dress, holidays, language, etc.) and adopt the traditions of the US do none of us any favor. You've seen them: Folks that have lived here for decades, but speak not a word of English, that live their lives like they did where they came from. They can do this because the country has locations ("___-town") where people of one ethnicity/region live together and recreate the place they left. Their presence does NOTHING to make our nation better/stronger. People who came here 100+ years ago yearned to be an "American". These days? Evidently, not so much. And they are no asset to us at all....

Yes - we are a nation of immigrants, but it's reasonable to expect that people who come here understand that: it is a privilege to be here, not a right; that they need to be Americans first, learning English and embracing the customs that are American; that it is not racist or bigoted to expect them to pledge allegiance to our flag; that we have freedom OF religion, not FROM religion and all should be treated with respect - not eliminated from the public way.

In the last 20 years the majority of the new wave of immigrants have an entitlement attitude that previous immigrants did not. Why? Because so many are criminals; because so many are illegal and demand to become instant citizens; because we've allowed newcomers to command the narrative - turning this country into enclaves that have become miniature versions of those places from which they've escaped; because we allow them to deplete or overburden the resources available to citizens and the taxpayers who provide them - health, education, welfare and crime prevention and punishment.

Much has been written about eliminating invasive species - no matter how beautiful, like loosestrife or just prolific like kudzu or Asian carp - for fear that they will permanently alter the landscape - cannot the same be said of humans as well?