It's Still The Economy, Stupid 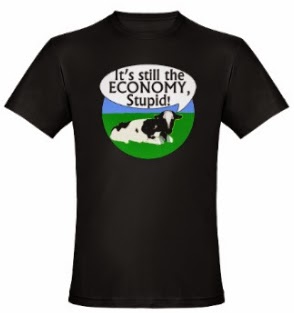 Do you ever get the feeling that the world you live in is somehow vastly different that the world our government tells you you're living in?  Well, I'm not an economics expert but here's some of the observations I've made.

Inflation is far worse than what the government says it is.  In the last six years I've seen my electric bill go up by 35%, same with gas, almost as much for water.  Gas was $1.74 a gallon in 2008 and now I'm paying $3.50, having doubled in price in six years.

When I go to the grocery store pork, chicken, beef have gone up as much as 60%.  A five quart oil and filter kit for doing your own oil changes have doubled.

And yet, the Federal Reserve issues their quarterly Consumer Price Index and tells us inflation is averaging 1.5% a year.  How is that even possible in light of the real costs of living we're experiencing?

Well, while not an expert, I know that the CPI is worthless as tits on a boar.  Go "wiki" it, folks. The CPI works on the assumption that, when prices for a certain product or service becomes too dear, then the consumer will stop buying it and opt to buy something else at a lower price.  The Fed tells you that when steak gets to be $10 bucks a pound, you'll move to chicken or pork, and when pork rises you'll move down to chicken.

Well, that works great as a theory.  But when a pound of hamburger now costs $5 bucks a pound it starts to be unaffordable even if I incorporate it in a box of hamburger helper!  And now that sausage and bacon is now $6 dollars a pound Spam is just not a good replacement for my breakfast eggs.  And, as for gas for my car, or for my utilities,  I have little choice.  Since I already try to conserve, there's not much room for savings there.

If the federal fairy tales were just restricted to lying about inflation I could probably handle that.  But then I have to hear about Quantitative Easing and it forces me to go to Wikipedia and find out what the hell that is.  QE is a Federal Reserve process that is supposedly in place to kickstart the economy. No, folks, that trillion dollar stimulus bill in January 2009 didn't do the job.  So as the economy drifted lower and lower, as the housing market continued to tank, as banks absolutely refused to make auto and home loans, the Fed had to do something.

So they implemented, so far, three stages of QE; 1, 2, and now 3.  QE is when the Fed goes out and buys $40 billion dollars worth of bonds each and every month, taking them off the market, in order to keep interest rates artificially low.  The theory is (and heretofore it always worked, except this time when Obama started his war on business) QE bond buying spurs lower interest rates and thus spur economic activity.  Forbes latest reporting says the FED has over $2 trillion dollars tied up in this bond buying...invisible to the market, but a sum that will have to be dealt with eventually.

And yet QE2 hasn't done a thing for Main Street; that's you and me.  Yes, it has helped the stock market because the 1 per centers shy away from those low bond yields of 1.5% because they have accountants that tell them that 1.5% yield won't even keep up with the real inflation that we on Main Street are suffering from.   So they go out and buy stocks, on the assumption that companies hold hard assets that will increase in value.  So, in a never ending cycle, publicly traded corporations go out and cut their work force to trim expenses and boost the bottom line so that the 1 per centers will find them attractive enough to buy shares from.

Meantime, back on Main Street, in the last six years more than ten million Americans have left the work force. So when the Labor Department issues their monthly jobs report it shows gains in employment and lower unemployment numbers because those ten million folks have given up looking!  So we now have a 75% increase in folks on disability and an equal percentage increase of those on food stamps, and three years of unemployment checks, all creating a drain on the federal treasury (us!)  And we have a corresponding number of citizens who are no longer paying taxes which makes the money drain even worse!  Isn't that great!

One big indicator as to why the economy sucks so bad came out last week.  Jaime Dimon, Chairman and CEO of Citigroup announced that their huge banking conglomerate may stop making FHA sourced loans.  The reason?  Obama's Justice Department comes around every six months and levies as much as $10 billion dollar fines for loans made where grammatical errors or t's not being crossed are subject to the same penalties that were levied against those home loan scams of six years ago.  Citigroup says making home loans is just not worth the headaches caused by Obama's Justice Department terrorists.  CITI even thought they might buy a little Obama goodwill when six months ago they pledged $100 million dollars to rejuvenate Detroit.  Not good enough for Obama, apparently.

CITI is not alone.  The other large American banks, even as they are pulling 0 interest loans from the Fed Lending window each morning, are still hesitant to make home loans, especially for risky borrowers....the very folks Obama is trying to score home loans for.  And the small banks are in even worse shape because their reserves dare not fall below the Fed's stated threshold or they will be closed down...so they just don't make loans except for credit cards.  With credit cards they can go and borrow funds from the Fed at 0 interest and loan it out on credit cards at 12 to 20 percent!

So this year home prices have declined ten percent, both existing and new homes.  Some economists are now predicting another dramatic decline in home prices this year as some 7 million 5 and 7 year short term home loans come up for renewal.

For many Americans their only personal wealth is wrapped up in their homes.  That, and the slow erosion of buying power over the last six years has led to that always proclaimed mantra of "income inequality".  Obama blames the 1 per centers because it sounds good....but he knows, cause his economic gurus have told him, he could tax everyone making $200,000 a year at 100% and he couldn't make a dent in either the national debt or in spurring economic activity.  But, hey, it works for the Yahoos who don't know QE from beans, and it sounds nice to blame the wealthy..after all they have the money and you don't.

Obama came out first thing Monday morning and scolded the Corporations for the big surge in "inversions"...that's a fancy name for American companies abandoning America and relocating overseas.  Labor is cheaper, they don't have the EPA on their ass, and they can pay a 10% corporate tax rate in Ireland, 15% in the UK,  instead of the 35% in America.  And nothing Obama does and nothing Obama says is going to stop it....unless he goes full blown socialists and just starts nationalizing American business, ala Venezuela...and we all know how well that went!

But, sadly, the problems are so complicated, so convoluted, that to fully understand the problem you almost have to have a degree in advanced economics.

Readers I'm sorry to bore you with all this.  I'm sorry to bog you down with convoluted truths that you simply won't see printed on any of Obama's teleprompters.  But, what it all comes down to, is "it's the economy stupid"...anyone for a free market economy?

The CPI removes items as they get pricy so that inflation seems lower.Gas and certain others have been gone a long time.

BHO wakes up every day knowing that he is accomplishing his goal of destroying the free market. The oligarchy is sleeping very well at night. The smoke and mirrors that the feds produce is the only growing sector of our economy. I am retired for 11 years and am secure financially, no debt. Raising a family and putting them through college was tough 20 years ago. I believe it would be impossible to do today. My wife and I pray for our Republic every day, nothing else appears to be working!

I agree, anon. I too am debt free (except my small mortgage) but it would be tough raising a family today.

We're seeming that in all those college graduates moving back in with their parents, as well as the decline in home ownership.

Well said, and anyone that doesn't understand at least the basics of what's happening in the economy is too stupid to realize what dire straights we're in... Couple of things: 1) When gas hit $2.00 a gallon under Bush, the MSM went crazy over "high gas prices"... Funny how the base price of fuel has doubled in less than 6 years under Obama, and the MSM doesn't utter a word; 2) Actual inflation is much higher, as you pint out. That, coupled with the abject failure of government attempts to "stimulate" (God, I hate that word anymore) economic activity and the real unemployment rate of {probably} 20%, means the federal government is doing everything it can to avoid making the truth known to the public. Even this bunch knows what could happen if John Q. Public decides things are really bad and not getting better. I'm not a conspiracy nut, but if one looks at the actions government (at all levels) has taken in buying weapons and ammunition, equipping police forces like combat troops, and implementing laws providing for controlling large portions of society, it makes you consider the possibility that those in charge may know something is coming that they'd rather not discuss.... The focus on "income inequality" is just the latest head fake by the government.

As I said to you the other day, Randy, I don't think a 2nd Civil War is as preposterous as some people think.

I read the daily headlines and something shocks me every day.

There's an old saying that says, "figures don't lie, but liars use figures".

Almost all gubermint data is useless/worthless, because when results are not to their liking, they 'massage' the data and pour sugar on it to make it look pretty.

As I recall, most of this foolishness started when Carter was Prez.

Housing and energy prices were out of control in the late 70's, so somebody got the idea that if they just removed those items from the 'picture', then inflation wouldn't look so bad.

The real problem is that significant purchasing power has been lost, because our dollar is currently only worth whale shit.

If I could just figure out a way to turn bullshit into gold, this country would have a 20 trillion dollar surplus.

Amen, anon...one only need google the current value of a 1950 dollar to see how badly the dollar has shrunk.