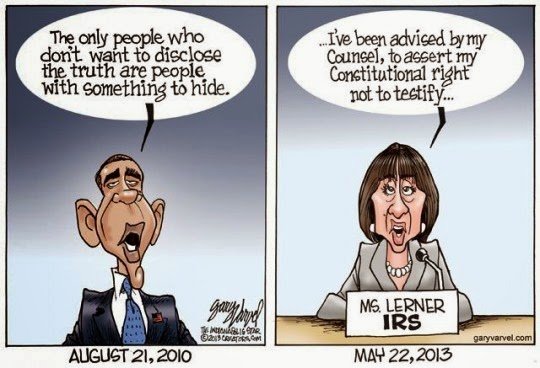 Memo To:  All Staff Members

You know what to do with those applications; toss in the waste basket right along with your video game cases and Starbucks latte cups.

Don't pity those assholes for a minute...you give an inch, they'll take a mile, and pretty soon they'll end up in charge and they'll be telling you no more four day work weeks and no more video game playing and no more annual conventions in Vegas.

As you all know, President Obama has our back on this.  I've been up to the White House 36 times this year and he's given us our marching orders.  Delay and persecute anyone who espouses free markets, small government and personal liberties, whatever the hell that is supposed to mean.

I don't need to tell you that this is all hush-hush...confidential, "need to know" only stuff.  If you, by chance, get a Congressional inquiry on the tax exempt denials and delays, just stonewall the hell out of them...they've got spines as soft as 20 minute spaghetti so don't sweat the Re-Thugs.

By the way, you folks are moving quickly enough on applications for our "friends"...you know who they are...."Women for The Advancement of Free Birth Control and Abortions United", "The African American Electioneering Swinging Baton Club", "The Charlie Rangel Fan Club", "The Sacred Church of Al Sharpton", "The Cap and Trade Tax Em Till It Really Hurts Association".  And let's not forget our Hispanic Friends.  Let's get moving on fast tracking exemption for "Hispanics Por La Causa" and the "Hispanic Association For The Advancement of Social Security Pensions For Those Who Never Paid In".  And Pedro from "La Raza" called..he's says you guys are slow in getting him an exemption for Mexican sourced Peso donations which should not be counted against their monetary cap.

Okay, gang, let's get cracking on those exemptions for our liberal friends.  As for those assholes and crazies out in Middle America, I've directed maintenance to double their wastebasket collections for the next few months.  I know you'll all be busy tossing those conservative applications in good ole File 13!

Lois
Posted by A Modest Scribler at 2:00 AM

How did you un-crash her hard drive and find the rosetta stone of lost e-mails?Thanks for the chuckle.

Good laugh to go with my morning coffee! And, no, it's not from Starbucks. Oh, and sure it's funny but there's actually some truth in your words, which isn't so funny.

Thanks, Carol...my coffee is Peet's Coffee, Goruda Blend, made in a Bunn coffeemaker that will deliver me 4 cups in 90 seconds! I'm such a coffee snob!

I just knew you were a lady of good taste! (for the coffee maker)...yuck on the creamer...black and no sugar here...:)

By the way, your logo always cracks me up. Isn't that Mick Jaggers lips? I keep picturing "Carol" as this sweet conservative lady and then I see those Jagger lips logos and say "she's a Stones fan".

I'm a big Stones fan myself.

Yes, it's the Stone's logo. I've been a LONG time fan. Since mid 70's. I saw them on their 'final' tour in '78. Still listen to them! Sweet, yes. Conservative.....welllllll, we'll leave that to the imagination! LOL

Carol, when I lived and worked in Saudi Arabia I would get so frustrated trying to work with the Saudis that I would return to my living compound, jump on my treadmill and play "Can't Get No Satisfaction" and "Hey You, Get Off of My Cloud" over and over until I could calm down for the evening. Wonderful therapy!

And yet, despite more evidence daily of what this woman did in her official capacity to target conservative groups, there is no chance she will be prosecuted for abusing her authority. Dog and pony show.... Move on folks, nothin' to see here....

Hard to nail a bureaucrat, Randy. Sad, but true.