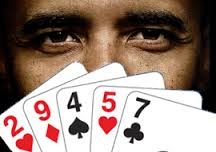 Obama's political enemies are taking great delight these days in watching the world blow up.  From Egypt to Libya to Syria to Iraq, the Middle East is an unholy mess.  But, let's offer a modicum of fairness here....Obama inherited a hell of a mess, made worse by his absolute leadership failures abroad and at home.

When you're President you don't get to fold your cards and check out.....you have to play whatever cards you are dealt.  And, let's face it, a number of Presidents have been forced to take ownership of the previous administration's messes.  The Civil War was well on the way long before Lincoln assumed the Presidency.  Richard Nixon inherited Lyndon Johnson's war in Vietnam.  George W. Bush reaped the 9/11 mess when Bill Clinton chose to "play through" and killed an order to take out Osama Bin Laden.

So Barack Obama campaigned on the dichotomies that the war in Iraq was unjustified while the one in Afghanistan was.  So Barack began his "Muslim love fest" by flying over to Egypt, Nobel Peace prize in hand, and proffered before the Egyptian Parliament that America was not so special and that Islam not only was...but was the religion of peace.

To convince the Muslims that he had their back, Obama was all too willing to pull out of Iraq, kit and caboodle.  Oh sure, Maliki was giving him some lip about extending the military Status of Forces Agreement but Barack could have browbeat him into acceptance in any number of ways.  But pulling out of Iraq was his "raison de etre" all through his presidential campaign and Obama wanted to placate his liberal friends.  So he turned a deaf ear to his military advisers who begged to keep a 10,000 man cadre in country, just in case the excrement once again hit the fan.  Even worse, Obama just began to ignore Iraq and the rest of the Middle East entirely, hoping against hope that all those "Muslim Springs" would some how work out.

So Obama cheered when Muslim fanatics threw out Mubarak only to stand aghast as the fanatics proved to be even worse than Mubarak who had carried "American water" a number of times when we needed his assistance in the Mid East.  Then, not learning a thing, Obama cheered when Libyan fanatics committed sodomy on the corpse of Momar Qaddafi and proved they were every bit as barbaric when they killed the American diplomatic staff there....while Obama and Killary Clinton stood by and blamed it on an anti-Muslim film.

Then, Syria erupted and Obama drew a line in the sand, then ignored it when it was crossed, and things got even worse.  ISIS was allowed to flourish as Obama, in January of this year, proclaimed them "junior varsity."

And how about Afghanistan?...the only war Obama felt worth fighting...how did that one turn out?  Well, we didn't do so hot there either...certainly not helped as Obama publicly declared staged withdrawal dates...a tactic that a reasoned state department and a reasoned military will tell you never to do.  So we kept pouring billions of dollars into Afghanistan, where billions of taxpayer dollars were eaten up by corrupt Afghani government officials, and we "drone-killed" a few hundred Al Quaida terrorists, and we pissed off the Pakistanis...but nothing much has been gained in Afghanistan either.

And who can forget Obama's "whispering campaign" at the Seoul, South Korea G-8 summit when Obama was caught on mike whispering to Putin's deputy to "wait until after the election..I can be more flexible".  And he was!  Flexible as hell as Putin came marching into the Ukraine a few months ago!

Look, as I've written here repeatedly, I've never favored occupation of troubled Muslim countries.  I would just as soon they kill each other off in great numbers as often as possible...when they are killing each other, they are not killing us!  But, as "second guess Hillary" correctly said, "doing nothing is not a viable foreign policy!"

The problem of course is that Obama has been a "do nothing" President since the day he took office.  He is capable of one thing; making speeches, then sitting back and let someone else lead the way..whether it is Nasty Nancy or Harry Reid or even Crazy Joe Biden, it has always been left to someone else to lead, whether for good or for bad.

And now even the Democrats and Obama's once loyal liberal friends are beginning to desert him.  Uber Liberal Maureen Dowd, of the New York Times castigated Obama unmercifully this week for his inaction abroad and over in Ferguson, Missouri.    A good dozen Democrats running for re-election are criticizing "the anointed one" and running as far away from him as possible.  Even more are making sure they are as far from Obama as they can get when he comes calling in their state.

Yes, Obama was dealt some bad cards, on the economy, on Middle East wars...but he played those cards as badly as anyone ever has.   And the sad part is the only one losing are the American people....Obama will leave the White House and see if he can't top Bill and Hillary's $100 million dollar haul for speech making..and we'll be paying the bill for Obama for decades to come.

Ante up folks; two and a half more years to go.

I guess the fact there are no comments, pretty much sums it up. Nothing more can be said. It's terribly sad that one can encapsulate Obama's Foreign Policy Failures in just a few sentences. Nuff said...

Yep, Frank...I could make it even shorter: "react, rather than act".

In the business world, your instincts are reactionary but you soon LEARN that doesn't work. So you act or else. Too bad he didn't learn anything. In school, in Congress and certainly not as President. F for failure is too good a grade....