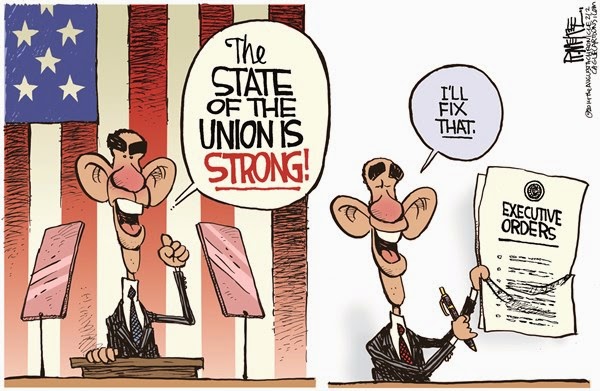 Executive Order number 1 directs Health and Human Services to institute a complete halt to Obamacare.  Hospitals, medical clinics and physicians were advised they would not be reimbursed for anyone covered under the Obamacare program.  The President said he would instruct Congress to come up with a more efficient, less costly program that wouldn't bankrupt the treasury and would put health care decisions back between the doctor and his patient.  Meantime, the country would operate under health care laws in place before the Obamacare implementation.

Congressional Democrats were up in arms about this Executive Order and promised to begin impeachment proceedings immediately.  However, Senator Harry Reid's legal defense team has counseled him against taking any impeachment action against the President, citing the Democratic party's previous support for Barack Hussain Obama's many Executive Orders that have now set precedent for all future Executive Branch behavior.  Staff attorneys said Obama set the stage for bigger and bigger Presidential power grabs that have now made the office of the President the single most powerful position on earth.

Executive Order number 2 has ordered the total elimination of the Environmental Protection Agency, the Department of Education, the elimination of 56 Presidential Czar positions.

Executive Order number 3 orders the elimination of the IRS.  IRS staffing will be cut by 90%.  Ten percent of the IRS work force, (if they can find ten percent who are nonpolitical and committed to the nation's service) will stay on board to collect the Fair Tax (see Executive Order number 4) a consumption tax that will replace the corrupt and inefficient income tax system.

Executive Order number 4 ends the nearly century old income tax system.  Advised by the Government Accounting Office that the old income tax system was fraught with waste, fraud and abuse, to such an extent that at least $300 billion dollars in tax receipts are lost each year to tax fraud and underreporting, non reporting of income.  The new Fair Tax Act will replace the old system and tax every product and service at the register.

The White House is reporting that they have 31 more Executive Orders in work and no longer need the advise and consent support from Congress.

It is this reporter's understanding that Senators Harry Reid and  Chuck Schumer, along with House Democratic leaders Nancy Pelosi, Charlie Rangel, Steny Hoyer and Debbie Wasserman Schultz were meeting with the President this afternoon.  White House sources have revealed the meeting with the new President did not go well.  It seems the President told the delegation that if they were so concerned about an equitable power balance between the three branches of government they would have stood up in opposition to Obama's running roughshod over the Constitution.

The President then issued an informal executive order...he ordered the Secret Service to throw this bunch out on the street on their ass.

LMAO... Stole my thunder. BO perfected the imperial Presidency. But that sword can cut two ways - and when (not if) it does, how can they legitimately complain? D's will rue the day they stood behind this pretender as he put on the crown. So will the rest of us, since what's left of the Constitution will be relegated to a mere historical document...

Randy, it would take at least two terms of a highly capable and talented Chief Executive to clean up the mess Obama has made...ain't just the Constitution he's destroyed...lots of other stuff.

I'm hoping it will happen, Jilly.