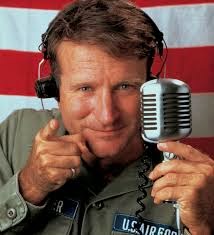 ...from a book of ornithology:  "during the day a robin will chirp in the most joyous of song...then when evening comes he sings a lament that will break your heart."

Robin's talent intrigued me enough to drag my wife and I to one of his movies.  It was "Moscow On The Hudson" and Robin really WAS that Russian immigrant.  He made me look at America again as, like an immigrant, I was seeing her for the very first time.

I did not care for all of Robin's movies...some seemed pretentious...it seemed that when Robin touched me was when he "became' the character he was playing on the screen.  I was still searching for that Russian immigrant.

Then one night my kids called me; they said "Dad...you just have to go see "Good Morning Vietnam"..the movie reminds us so much of you and mom."  Having spent so much time in Vietnam, and knowing Adrian Kronauer's work on Armed Forces Radio, I feared Robin would "overplay it".
He didn't.  Robin was Adrian Kronaeur.  Robin was every G.I. who went to Vietnam and wondered what the hell it was all about.  Robin made me laugh and Robin made me cry.

Then Hollywood threw a crown on Robin and all of a sudden he became an "actor"...while there was much truth and honesty and compassion in Good Will Hunting, I just couldn't dig it very much.

So no more movies for me.  Then one night I caught a Robin Williams film called "Awakenings".  And Robin was once again that timid medical research doctor administering the experimental drug L-Dopa that resurrected the minds of those pitiful lost souls wandering around in a world without meaning.  Robin "underplayed" that role so delicately that it worked wonderfully....his love and compassion and disappointments were achingly real.

And every time Robin came on one of the late night talk shows he was so manic, so smothering that I couldn't bear to watch...he just wasn't funny to me when he was like that.

Then Robin played "Mrs. Doubtfire" and I knew he would play the role well.  Robin was hilarious.  But he played Mrs. Doubtfire so well that I fell in love with that sweet but tart old woman.  I missed her every time Robin shed the foam boobs and rubber face.   Only Dustin Hoffman, with "Tootsie" could summon the dramatic skills to create a character out of whole cloth, and make you fall in love with them.

The last Robin movie I saw was "What Dreams May Come".  The movie was so very dark that it scared away the gigglers...the empty heads that can only thrive on car crashes and idiocy.  Ironically, "What Dreams May Come" deals with death, suicide, the relativity of heaven and hell, and the overriding supremacy of love.  I saw the movie not long after I lost my son and I found the movie to be healing for me.

Robin, like his good friend, Jonathon Winters, battled depression for decades.  Jonathon was saved by a therapist, and through his art, and stumbled through to the end.  Robin apparently couldn't make the final lap.  Perhaps his "inner child", that magic madness that made Robin special, was just not enough anymore.

So the Robin who serenaded us and brought us such joy, would sing that song of evening lament and say goodbye forever.  Rest in peace, Robin.  Tell Johnny Winters we miss him and try not to raise too much hell in heaven.

nice story telling. I am so sorry his demons were so strong.

He lived in the same little town where I grew up,Kenwood.I never got to meet him but a good friend of mine hung out and partied with him and his neighbor and always said what a truly funny and great guy he was.

Maybe you should mail this to his family. This is an extraordinarily moving eulogy here.

This man's incomparable ability to make people love, hate, laugh hysterically or cry uncontrollably all in ninety minutes on the silver screen was a gift that will be missed by so many. It's heartbreaking that he couldn't reach out one more time for a hand up, ending the rest of his life for all of iuus. Most of us have some very strong fellings about suicide. Today I truly hate it!

Yes, cuz, he could make you laugh, but he could also make you cry. He will be missed by so many.

Craig, it seems that the preponderance of those who knew him use the word "sweet" to describe him.

Thank you, Ken. Yes, suicide is a very sad word always. The world is a little grayer today.

Not going to join in the pity party. This guy killed himself - despite having everything this world had to offer. No attempt here to minimize the effects of depression (my wife had wicked PP depression after our sons birth, so I've seen it), but to resort to murdering yourself is the most selfish thing anyone can do. His children will forever live with the fact that their father choose to die rather than be there for them. His wife will always wonder "Why?" - the potential for blaming herself is huge: They will get angry. His faults are well publicized, but in the end, he made the choice to do what he did. He's not a victim, let no one say that. If you are suffering from the same demons, get help. In truth, Christ is the only hope any of us have and He can help you when all seems lost. Don't do what Robin Williams did - it is wrong.

This is one time when I'm going to strongly disagree with you, Randy. Don't care what your personal experience with depression is...you clearly don't understand it.

Loved him, but he was a coward. Life is a constant struggle, there are two paths, life or death. I will scratch an existence until the end, surviving is cool!

Anon, you are able to struggle because you are in charge of your faculties...someone with chronic depression is not.

I just hope you aren't forced to ever have a loved one with that condition and have to learn the hard way that it ain't what you think.

Coward? People who fight that kind of depression for years and years and you call this cowards?

Walk a mile in their shoes, Anon.

Wrong, two paths, life or death. Nothing is easy, reality sucks, be brave!