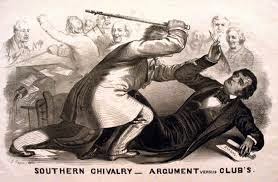 On September 9th, 2009, Barack Obama deigned to ride down Pennsylvania Avenue and address a joint session of Congress.  When Obama began speaking of the glory of Obamacare Congressman Joe Wilson, from South Carolina, shouted out "liar."

Well, the bloodless bureaucrats that now dwell in Congress demanded an apology.  Senator Juan McCain lamented that Wilson's shout-out was such a breach in protocol that he was ashamed to be of the same political party.  Harry Reid was aghast, spittle flowing from his mouth, that someone had criticized the "anointed one."  Nancy Pelosi and Debbie Wasserman Test Schultz got the vapors.

A week later Congressman Wilson was forced to apologize or face being forced out of Congress.  Evan after Wilson issued an apology Congress forced a censure vote against Wilson.

Our Congress was not always so meek and mild.  There was a time when a man's honor was something to fight for....a time when our leaders felt so strongly about their political views that they were willing to fight for them.

In 1798 Congressman Roger Griswold, Democrat, from Connecticut, called Vermont Congressman Matthew Lyon, Republican, a scoundrel.   A physical melee broke out and it was quite awhile before the fist fight could be quelled.  The hostilities lingered and a few weeks later Lyon spit in Griswold's face which led to Griswold beating Congressman Lyon about the face and head.

The debate over slavery had lingered for years before the Civil War erupted into all out war.  In 1850 Senator Thomas Benton, a fervent anti-slavery advocate verbally attacked his fellow Democrat, Senator Henry Foote, from Mississippi.  Foote promptly extracted a pistol from his jacket and pointed it at Benton with the full intention of shooting him dead.  Thankfully, fellow Senators jumped Foote before he could fire and the Senate adjourned to affect a "cooling off period."

In 1856 Congressman Preston Brooks beat Charles Sumner unconscious with his cane.  Sumner had castigated Brooks and called his slave holding constituents "pimps" for holding slaves.  Sumner was beaten so badly that he would miss three years of his Senate term while recuperating from the severe beating.  Southern newspapers made Brooks a hero and Brooks continued in his fiery behavior throughout his term.  Finally, angered by Brooks beyond reason, Congressman Anson Burlingame, from Massachusetts, challenged Brooks to a duel on the floor of the House.  The duel never took place because Brooks heard that Burlingame was a "crack shot" and, no fool he, never showed up for the duel.

In the wake of the Sumner beating Congressman Laurence Keitt, Sumner's "second" in the Sumner brawl (he prevented anyone to come to Sumner's aid) was accosted on the House floor by Congressman Galusha Grow, Republican from Pennsylvania.  Grow called Keitt a "slave driver" after which Keitt grabbed Grow by the throat and began choking him.  On this occasion more than 50 members of the House joined in the fray, each of them hell bent on beating the hell out of "the enemy."  During the scuffle someone grabbed Congressman William Barksdale's lush head of hair and it proved to be a fine wig, leaving Barksdale's bald pate for everyone to see.  Well, the sight of Barksdale's bald head struck most of the combatants as extremely funny and the ensuing roar of laughter by all present brought the brawl to its conclusion.

Finally, lest we attribute this legislative madness to old dead men, we should remember that Senator  Zell Miller, Democrat from Georgia, beginning to gag on his party's descent into unreasoning liberalism, chose to give a keynote speech in support of George W. Bush back in 2000.  Well, the Democrats were up in arms about this "traitor" and they trotted out their "media boy", MSNBC's Chris Matthews to do a "hit piece" interview of Miller during the convention coverage.  As soon as Miller came on air Mathews began that "machine gun interrogation of Miller, not allowing him to answer a question before he moved on to another.  All of a sudden Senator Miller yelled "shut up!" to Mathews....and then Miller said "I wish we still had duels...cause I'd damn sure challenge you to a duel about now!"  And, for the first time in years, Chris Mathews had nothing to say.

Milk toast was once what you fed toothless people.  You made a piece of toast, poured warm milk over it, the better for the old toothless wretch to get it down his gullet.  Sadly, that is the diet of today's Congress.  There are no bold actions to reduce the deficit, or fight federal fraud, waste and abuse, to represent their constituents with a sense of principle, or even to pass a budget if they don't feel like it.

And now, some five years later, we know old Joe Wilson was right...Obama was a "liar."

Too bad Sarah Palin isn't in the Senate, sure would be nice to see her open a can-o-whoopass on Feinstein and Reid.

Craig, I could do with some Congressmen willing to fight for what's right...but Sarah Palin? Not so much. She gets a bit silly sometimes.