The Shoe Is On Neither Foot 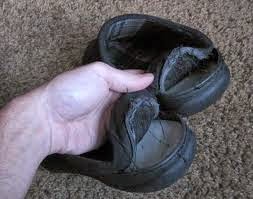 The shoe is on neither foot

I've been wearing Dearfoam house slippers for 30 years.  I have to replace them every ten years or so.  So, for my birthday, my wife went to Walmart and bought me a pair of Dearfoam slippers to replace my ten year old now raggedy version.  When presented with my present I smiled and kissed my wife, saw that they were Dearfoams and never even bothered to slip my feet in them...so confident of the quality.

So a few days later I pulled the Dearfoam slippers out of the bag, slipped my feet into them, and was hugely shocked at shoes that are only fit to be worn by a clown in the circus.  The tops of the shoes are made of some corduroy type material, with a plastic sole sewn into the bottom part of the shoe.  But the plastic insert is so loose within the bottom cloth confines that it sends anyone walking in them into a drunken crawl.  "Squish, Squish", goes the plastic as it roams around down there like a small sail boat in a roaring sea.  I sat down and took the slippers off.  After walking no more than 20 feet on a carpeted floor it was evident that the thin bottom material would soon tear away and expose the plastic sole.  The shoes were simply beyond horrible; impossible to walk on with the plastic sole shifting with every step and the quality was absolutely terrible.

"What happened?", I wondered.  Three decades and three pair of Dearfoams and now this?  Well, you know by now my curiosity will just not leave this alone.  So I went to Amazon and began reading customer reviews and read of similar problems with Dearfoams.   Some Dearfoam models did receive favorable reviews but so many were reporting just what I had experienced.

So I ventured further.  I googled RG Barry, the company that has made house slippers since 1945.  Sure enough, I found a glowing business report that said RG Barry, in 2004, facing increased competition, and not being able to squeeze enough into their corporate bottom line, had began making their Dearfoams offshore, in Mexico and China...and the good old American workers who had been making quality Dearfoams for 59 years were now out of work....and Americans once again must wear bad quality for the sake of corporate greed....and pay more taxes to support all those unemployed RG Barry workers.

The glowing business article mentioned that RG Barry was just named "shoe supplier of the quarter" by Walmart.  Well whoop de do....mine went back to the return desk at Walmart so next quarter is in jeopardy.

Well, it's back to the ten year old American made sheepskin Dearfoams that my granddaughter bought me for Christmas back in 2004.  The wool is pretty much gone inside and they are tattered and stained, but at least when I put them on I'm not stumbling like a drunken sailor on cheap plastic inserts.

I avoid Walmart at all cost. Not for the same reason as most libs because I say, "If you don't like what you're getting paid, FIND A DIFFERENT JOB!" Anyhow, it's like a Chines toxic dump in there!! China has such low manufacturing standards that they make their own people sick, yet we keep buying this junk because it's cheap!
About 10 years back, I ordered some name brand jog suits for my girls. Website was in China. Price was about half the cost of buying in Dillard's. In emailing with the store, I was told in broken English that it came from the same factory that Dillard's & this actual name brand got their suits from. When the suits arrived, they were outstanding quality! BUT, the tag actually said 'MADE IN AMERICA'. WHAT????? No it wasn't. But the Chinese don't care as long as they make money. Being dishonest seems to come naturally to them. That's when I started taking a strong stance on what I was going to buy & who I would buy it from!

Agree, Carol. I've been reading labels for years now...and now you tell me they can even fake that!

With any product of value I try to buy American but it is getting harder and harder now.

China is getting deeper and deeper into our food supply too. I was aghast that Smithfield Foods sold themselves to the Chinese...will never buy Smithfield products again for fear of what's in them or how they are processed.

That's why NAFTA just sucks hind tit. When other countries are not complying with the same labor and environmental laws, and business ethics that Americans do we can't hope to compete and the end result is always a loss of American jobs and a poor quality product.

I stay away from all things Chinese after I watched an episode on Larry King Live showing them skinning ALIVE dogs to create cute furry toys for the American market! I will happily pay more for American products and with internet shopping it is pretty easy to do. Even Stanley Thermos and Stanley Measuring Tapes, tradition American products, are now made in China!
and, really, I agree with Carol about Walmart, go find a better job if you are able! However, as a taxpayer, I am tired of subsidizing their wages in the form of food stamps, housing subsidies and other government freebies for the "working poor"!
and, my Arizona friend, I still have tomato jam to send you and I am not beyond smuggling in a couple fresh tomatoes!

Jerry, email me at friend4@cox.net and I'll send you my address. Please don't trouble yourself with fresh tomatoes but I'd love to try your tomato jam.

Make sure you put your address on any package you send and I'll return the favor by sending you some cactus jelly or some other native delicacy from here.

Down with Walmart! The dog story had me shivering.

Dearel, I sent you an email and it was BLOCKED! Communist Conspiracy?
send one to me: slate@earthlink.net
thanks, Jerry

Jerry, if you are referring to the email you sent this morning, I got it and answered back. Just sent you another one...hope you receive it. If not, let me know.