When I Realized Arizona Was "Home" 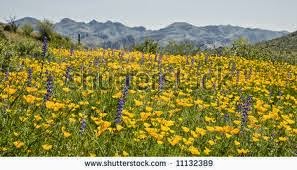 The Arizona Republic has been running a series of letters from folks relating when they first realized Arizona was "home".  I was tempted to write one and send it in but I'm afraid they probably wouldn't publish it.

You see, for me, moving to Arizona was fleeing from California, my boyhood home, and a state that I once dearly loved.  I was living in North County, San Diego and we loved the area very much.  We bought a beautiful Spanish style home on a quarter acre in a quiet, sedate and mature neighborhood...green lawns, friendly neighbors and a quietude that is rare these days.  Folks parked their cars in the garage, leaving the streets luxuriously wide and the sidewalks ideal for our morning walks.

Then the influx of millions of illegal Mexicans began taking its toll on our neighborhood.  The first "multiple family household" moved in a couple of blocks away.  Then we began seeing more and more cars parked up on the front lawn, heard the distant din of loud mariachi music disturbing our quiet nights, and condoms and bags of fast food garbage began appearing in the gutters.  At last it was our turn as our good neighbors just across the street sold out and a Mexican tribe moved in.  Soon the grass had been torn out to make room for three cars and the tribe began throwing Mariachi parties that ran late into the night.  One of the clever fellows had mounted 3 foot speakers in his garage and when he cranked up the music the foundation of our house would rumble and cry.  I spent hours on the phone with the Sheriff's Office, calling in noise complaints.  The Sheriff would respond, issue a warning, then, as soon as he departed the music would crank up again.

Along with that, the two nearby cities, San Marcos and Escondido became ground zero for Mexican gangs and soon crime was rampant and the graffiti flowed freely.

So I set out on a road trip to Arizona, first to Tucson, then Phoenix.  I might have chosen Tucson for our next home had it not been for that city hosting a week of the most violent lightening and thunder storms this state had seen in years.  After a few days there I drove north to Phoenix.  Arriving in the city right at the height of the commuter rush I still marveled that, in contrast to Los Angeles or San Diego, the traffic actually "moved!".

Only by accident did I find Sun City.  I got lost looking for another area of town and wound up in this quiet little haven that was surrounded by much busier and frantic locales.  I was immediately impressed.  There were no cars parked on the streets, no grease stained driveways, no stereos blasting from auto or home and it reminded me so much of the quiet and orderliness of an Air Force Base that I was immediately enchanted,   Within a month I bought a home and established my residency in Arizona.

The first thing I noticed was that my Driver's License was good for many years and the cost to license a vehicle was about $700 dollars less than in California.   And when I picked up the local paper I read of a part time state legislature that got paid $24,000 dollars a year and met for only a few months to draw up a budget that matched state revenue, then they all went home to their regular jobs.  And, because it is Republican controlled, they make sure they try to stay out of the citizen's business and tax him as little as possible.

Still, for the first couple of years, I felt like Arizona was something I had to "settle for"...it did not have the lovely beaches and park greenery of the Golden State.  Then, little by little, I began to fall in love.  I took at day trip down to Bisbee and was charmed by their Bed and Breakfast culture.  While there I ventured farther out and was left speechless and nearly blinded by miles and miles of desert wildflowers.  One Sunday morning my wife and I drove into Prescott, the old territorial capitol, and found hundreds of locals gathered in the park at city center.  Local artists and artisans from Jerome were displaying colorful Southwest paintings and earthenware and folks wandered in and out of the local shops, or breakfasting on outdoor patios in quaint little sidewalk cafes. 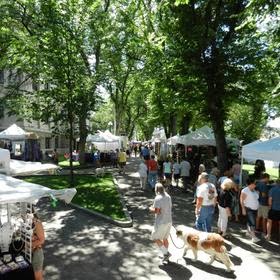 On other day trips I drove out to Apache Junction and watched in amusement as prospectors set off to find The Lost Dutchman Mine and become rich beyond their wildest dreams. 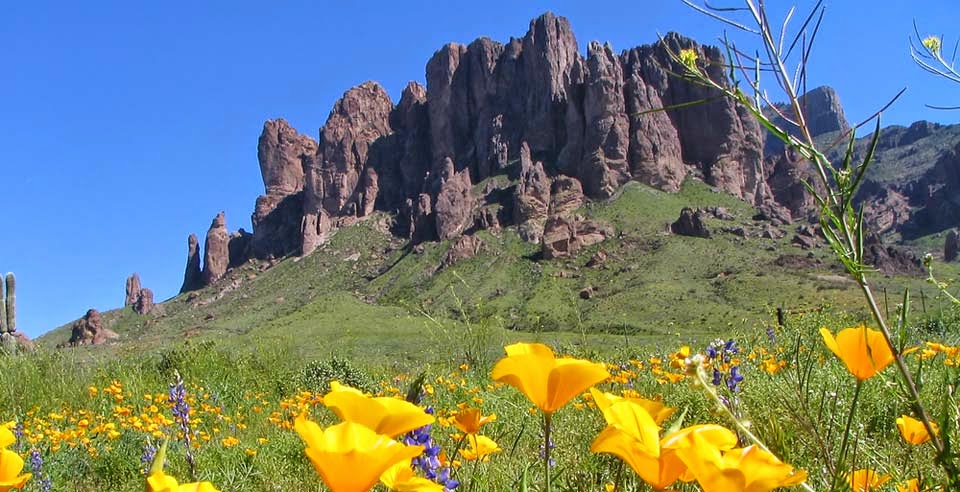 And I found the San Francisco Peaks up north to be every bit as beautiful, and far less congested than California's Lake Tahoe. 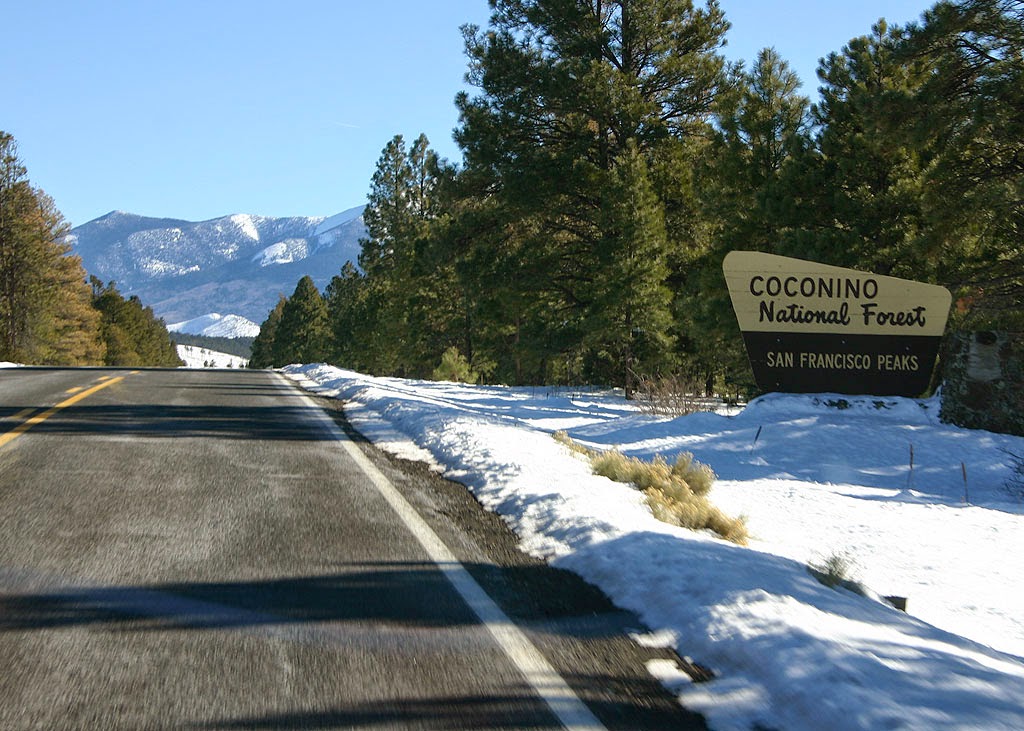 But it was the little things closer to home that finally brought me to a real love of Arizona.  I finally realized I was home when I began to appreciate the beauty of Prickly Pear Cactus blossoms, and colorful Yellow Bells and Orange Bells and Lantana that asked for little water in return for spectacular beauty in your own back yard.  I enjoyed sitting out on my back patio, a cup of coffee in hand, and watching the pidgins and doves and quail wandering about my yard and bathing in the water that pools beneath my citrus trees.  And when I looked up to the skies I was rewarded with powder blue skies and cotton ball clouds, and, in the winter, massive flights of ducks in aerial caravan, en route to their refuge to the south. 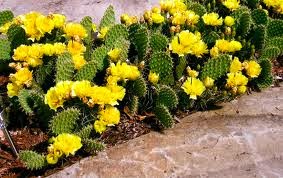 I've lived in the winter havens of both San Diego and Hawaii and Arizona winters are about as pleasurable as one can find anywhere.  Yes, the summers are blazing hot and they drive away some two million snowbirds back to their homes in Minnesota and North Dakota and the Mid-West, but those of us who stay are blessed with star-studded night skies so clear that you can reach out and grab a handful of stars in one fell swoop.  And every week or two in the summer months God sends us a monsoon storm that blesses us with soothing rains, a 20 degree drop in the temperature and the scent of fresh linen as the Creosote opens up and sends their heavenly scents all across the valley. 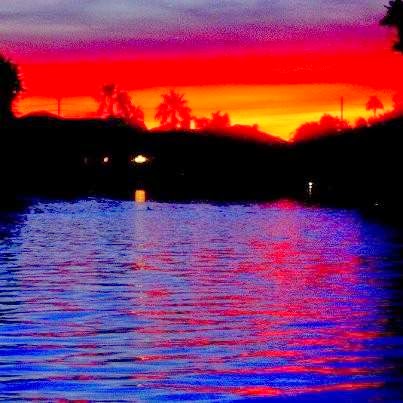 And when our day is done we can walk out into the back yard, take a seat, and witness some of the most spectacular sunsets one can ever hope to see.  And I am "home".
Posted by A Modest Scribler at 2:00 AM

Good morning friend, you have found a nice place for that morning coffee. If I ever get off my ass I intend to visit you!

Sounds beautiful. This is one column of yours I hope few people read, don't want anyone to spoil your home.Enjoy your coffee and have a great day!

And some day I'll come up and visit you, Jerry....and we can hash out our political differences and have some fun doing it. :)

Craig, we already have thousands of California transplants that have come here and tried to convert Arizona to Cali ways.

We're holding them off politically but they are forming alliances with Hispanics and hope to make us as crazy as California.

I think most of us who read this blog are thinking the same thing. Should a kept it to yourself. I'm sure most Californians aren't aware that Arizona can be beautiful. All we know is HOT! I can hear the bags packing as I write this. Hopefully most of them are Hispanic(no offense) as we have enough of them here to "lend" to other states. I'm glad you found your "Heaven" on earth. Few of us do. I also hope you don't live to see your wonderful community spoiled again by the Savages from the South. Moving is such a pain...

Frank, we still have our share of "savages from the South". Hit and run drivers, wild police chases, illegal immigration marches and elevated crime.

The difference between Arizona and California is the official mindset; we still have a legislature, a law enforcement community and a largely general consensus that small government is good, that illegals are illegals and aren't welcome here. Oh, we have plenty of California transplants that live here and now agitate for "hope and change" but they haven't won the day here....yet.

The very geography of the state, and western tradition still seems to breed the mavericks here...folks that can recognize nonsense when they see it.

I moved here nine years ago from the People's Republik of Minnesotastan(just like Cali, really, except with -50 winters and a red carpet laid out for Jihadists rather than Mexicans). I could have moved anywhere, but I chose Arizona.

It's too late: the secret is out! I moved here in '82, barely 21 years old, and I thought, "WOW! This is the best kept secret around! Natural beauty, great winter weather, snow within a 2 hour drive & no congestion!" I actually laughed at the city of Phoenix when I first viewed it from South Mountain. After growing up in Chicago, I was used to skyscrapers & massive population with streets like parking lots in rush hour. To see just a few buildings in Phoenix, the 'tiny' US60 freeway (instead of a big interstate!) & the western feel to outlying areas like Apache Junction, I hoped that it would never change. But change is inevitable and I long for the days when the valley truly was a 'secret'!

Thanks, Wraith. Welcome home to you as well.

It's not just AZ - get away from any blue state/city/municipality and things tend to improve rather dramatically. My boys finish HS in 4 years. Told my wife years ago "When they do, I'm leaving CA. I hope you come with me, but I AM leaving." She's a native that yearns for the 1960's CA.... Dream on. This place is lost. TN (my home state), NC, ID, NV, ID... the possibilities are endless. A local guy has bought full page ads in the papers exposing the lies of the CA legislature (liar-liar.com). Does anybody really care? Probably not.

You're right, Carol...the secret IS out. Just read an article about California losing its taxpayers (working class).

But, as long as Silicon Valley and Frisco are happy (and rich) those dead heads don't care much for what is happening to the state.

You've seen growth over your way and I've certainly seen it over here on the West side as well....but it's still better than a lot of other places I've seen lately.

Yeah, Randy, some people still care. As to anywhere but blue states, Idaho was my second choice of destination. I'd give up on Nevada because the dominance of "blue Vegas" is turning that state blue in a hurry.

My condolences to your wife who still holds out hope that California will return to its 1960's "golden age"...not happening. If politics did a 180 tomorrow it would take 20 years to clean up the mess in that state...if ever.

I often wonder if you actually sell timeshare or real estate in Arizona since you make it sound almost too good to be true. Maybe one day I'll make the move with my job and take a wise man's advice and escape the traffic, attitudes and taxes of NJ. Hope you had a great labor day weekend!

Hi Trevor, nope..not into real estate or time shares....just enjoying living in a state that pretty much leaves me alone and let's me live my life the way I see fit.

And yes, Arizona is spectacular...have every kind of climate and an impressive variety of geography.