Can "Speak Softly" Win The Day? 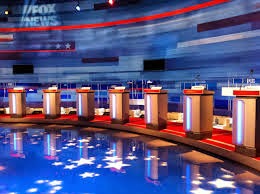 Imagine you are watching a Presidential debate sometime in the late spring of 2016.  What readily comes to your mind is surely the faces of Jeb Bush, Rand Paul, Ted Cruz, Chris Christie...perhaps Marco Rubio..and even perhaps Mitt Romney again.

Now imagine there's one more candidate up there on the dais.  Note the contrast between him and the other candidates.  As each one of the well known politicos accuse each other of everything from being a big spender, or soft on immigration, or molesting his children, there is one who speaks softly, without rancor, among that bunch.

Imagine someone who was born in a Detroit ghetto, who was abandoned by his father at eight years old, who was raised by a single mom, who knows poverty, knows what it's like growing up among gang-bangers up on that debate podium.

Imagine further, a man who carried such anger that he tried to stab a fellow student who was harassing him, then retreating to the boys restroom and crying out to God for a narrow escape from a life of misery.  Imagine that young boy turning to God and allowing God to re-direct his life to one of supreme worth...a God that would usher him to excel in academics even as his fellows called him dumb and ignorant.

Imagine that young boy going further.  Imagine him majoring in pre-med in college, then on to medical school.  Imagine this soft talking man becoming the world's pre imminent neurosurgeon, pioneering surgical procedures and saving lives that no one doctor had ever achieved before.

Now imagine that soft talking fella standing not ten feet away from President Obama at a National Prayer Breakfast and having the courage to criticize Obamacare as a program doomed to failure due to its socialist and bullying nature.

Imagine a man who believes in God and believes God has blessed our nation and that it's not a good idea to piss God off.  Imagine a Black man in the Oval Office who might REALLY be a role model for Black America....and might well bind up the wounds of racial warfare.

Imagine a man who has healed and given comfort to thousands....a man who might heal America as well, if given a chance. 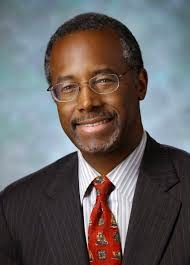 And he hasn't much of a chance.  He doesn't speak loud enough, he doesn't yell, he doesn't pontificate.  Not enough razz ma tazz in his delivery.  And he's Black, and the bigots will never vote for a Black, and even some of the good people are fearful of being bamboozled into believing a Black  can speak to and for all of America....fooled once with Obama, they are reluctant to ride that train again.

And, really, do we deserve Dr. Ben Carson?  Is America so far gone down the slippery slope that we are no longer willing to elect an ethical man? ....a man who won't promise us the moon?

Or will we Americans have the courage and good sense to reach for the brass ring just one more time..and finally save ourselves?  Time will tell.  The political pundits are giving Dr. Carson a one in a hundred chance of winning the nomination and the Presidency, for many of the reasons already cited.

If you'd like to learn more about Dr. Ben, go to RunBenRun.org.  http://www.runbenrun.org

God, could we use more "God" and less rancor and less hate....and lots more of "speaking softly."
Posted by A Modest Scribler at 2:00 AM

Yes, he would be the sanest of the bunch but we seldom vote for the best, do we? It seems we don't want anything that involves work, actually doing something. We want hype, sound bites and bling.

Yes, Jerry, it's quite amazing...in a country with thousands of brilliant and ethical people, we vote for mediocrity.

And we ignore substance and vote for bright and shiny things that are hollow inside.

Do you remember "Lil' Abner"?
"We have seen the enemy and he is us!"

I NEVER thought I could support a Black man again. Obama really put a bad taste in my mouth and it will continue to be there for a little over 2 years. I voted Ross Perot because I was tired of the same ol, same ol. I could vote outside the norm again. The only Politician I have donated money to, was for whoever ran against Harry Reid. Lately I donated to Allen West because I really like what he has to say and I'm thinking about donating to Dr. Carson. There are some really fine Blacks out there and it's too bad we voted in the worst of the worst. We may never recover people say. But I believe in American resolve. If we can get by Obama without a Depression, we can recover. It just takes common sense of which Obama has NONE! Let's hope America has common sense...

Frank, I have felt the same way about electing another Black president, even wrote in an earlier blog that Obama may have ruined it for future Black presidential candidates for perhaps a hundred years.

My first impression of Dr. Carson was that this was simply an attempt by Republicans to show they are not racist, since they admire Dr. Carson.

Then I REALLY began listening to what Dr. Carson has to say. He is NOT politically correct! For example, when Sharpton and Jessie Jackson were talking about mean old honky in Ferguson, Missouri, Dr. Carson said those two were trying to make it a racial matter when, in reality, it was a law and order matter....he said Blacks need to be raised to respect the rule of law and avoid the kind of confrontations that get them in trouble. He speaks often of the plague of unwed mothers among Black communities and the lack of focus on taking advantage of educational opportunities they are given.

If Dr. Carson has done nothing else he has raised the level of discussion on the political scene and those who listen to him can learn something.

As to an American recovery, I hover between extreme pessimism and cautious optimism.

I hate the saying, "America needs to "wake up". America is awake. That term is over used. America needs to overcome(thank you Dr. King), not wake up. We've had bad Presidents(but not this bad) before. I hope Romney stays away. He is not electable. Most Politicians of today are tainted. Fresh and new. Our new slogan. Just needed to rant...

Frankly, I'm sick and tired of hearing about race, color, and/or ethnicity. I want to hear about character. Character has no color. Character is not limited or defined by race. Character doesn't have an ideological bent. And character is the one thing that matters in leadership - witness our current President to prove that an absence of character also matters. I no longer participate in voting (cancelled my registration several months ago), since a majority of Americans don't consider character relevant - it's all about "Gimmie". Carson? Yeah, maybe.... but Herman Cain had the image and look how that turned out. Like I said, it's all about character.

My opinion only, Randy...folks like you who don't vote really DO! Your failure to vote for the least disgusting Republican means you help to elect Hillary next time....just as those in 2012 didn't like Mormons, or didn't think Romney was conservative enough, then stayed home on election day, helped to re-elect Obama.

From your previous comments you've given me every indication that you're an intelligent guy but "pouting" and electing to stay home cause you didn't get who you wanted will always result in someone you will like even less running the country.

Dr Carson is definitely the only person worthy of being elected in our political circus. If/when he is elected wonder how fast jesse and al will suddenly change their tune or fabricate some of their typical BS.I am all for Dr Carson>

Time will tell, Craig, whether Dr. Ben has any chance at all. We will have to look, if he chooses to run, at his base organization...how adept is it? Can his "machine" defeat Hillary's mighty "machine?" Will those who regret voting for Obama dare to vote for another Black man?
Will he be meek like Romney and not respond to the legion of lies that Democrats will throw his way? Will he, like Romney, spend too much of his time combatting liberal dishonesty and not enough time on his platform? Will the Republican party get behind him in a big way? So many 'if's', my friend.

I have been a fan of Dr. Carson for a while. I agree that unfortunately Obama has ruined it for any black candidate for a long time. One can hope though.....

Let's hope for the best, Jilly...America deserves at least one leader that will speak up and remind Blacks that Dr. King's message was not "sit on your ass and draw a welfare check".