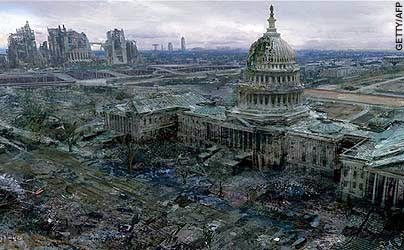 How many of you caught the news of the Russian nuclear capable bombers flying just 50 miles off the California coast on Monday last?  Our Air Force sent up two F-22's to monitor their activity.  Two of them headed back toward Russia and two of them swung north and skirted Alaskan airspace.

Vladimir Putin is just teasing Barry, just like he mocks him every week.  How many saw the laser image of Obama lusting after a banana projected on the side of a Moscow office building?  Putin has no respect for Barry, with good reason.  He's pretty well had his way in the Ukraine, having learned that Barry's "red lines" are just laughable...not to be taken seriously.

Seasoned diplomats will tell you that, when your adversary loses respect for you, you are in dire peril.  Whether it's Barry's overall "Muslim ass-kissing" strategy in the Middle East, or the Ukraine, or the present Iraqi mess or Barry's six year long dance with Iran on nuclear weapons manufacturing, Putin has learned that Barry is all hat and no cowboy.

The results of Barry's "leading from behind" whether in domestic affairs, or in foreign policy, chaos rules the day in our nation's capitol.  Obama has managed to take us from the world's only superpower to the world's biggest wimp.

That worries me.  Let me ask you all a question.  Knowing Obama heads out on vacation or to a fundraiser, or simply sits impotent in the oval office every time there's a crisis, how much confidence do you have that Obama would pull the trigger on a nuclear war if old Vladamir decided to take the big gamble and send a couple of hundred nuclear missiles our way?  Now, I want you to think about that really hard.  How many times have you seen Obama fumble the ball, stutter and delay and hope against hope that a problem goes away?  Benghazi?  Syria?  Iraq?  Iran?  Would you bet your children's lives that Obama would launch?  I honestly question whether this man-child would step up to the plate.  That's the first time I doubted a President's backbone as regarding nuclear retaliation.

And really, it doesn't matter a whole hell of a lot whether WE believe Barry would launch; the huge question is does Vladamir believe he will!  And if he doubts Barry's resolve we could be in for real peril...at least until we send the community organizer back to Chicago.

Meantime, let's hope the ISIS are not using all that money they confiscated across western Iraq to buy a few suitcase bombs from North Korea.  The only suitcase I want to see in the next two years are those Obama is carrying on 20 January 2017.

I think Saddam understood his culture far more than we ever will.
It is an idyllic thought to rule by example, to seek some kind of agreement through peace but we live in a brutal world and sometimes people only understand force over gentle persuasion. We all want a kinder, better world. That probably takes force. I hope we can hang on 2 more years; it is clearly getting worse every day.
Maybe it is time to send some to heaven?

Jerry, I'm shocked! You a war-monger?
Yeah, you already know my thoughts on this; no occupation, ever. Quick and deadly "hot strikes" into areas of concern, then back to one of our pre-positioning bases for supper. (these idiots can't fight..never could...a blog coming up on that this coming week).

The man-child, the "leadership-challenged" guy is inept in everything he does...he tries to make world realities fit his own personal views, and those views are wrong.

The Iranians didn't release those hostages back in 1981 out of the goodness of the hearts...they feared Reagan would carry out his promise to level Tehran if they didn't. Yes, strength leads to peace and weakness brings war.

yep, send em to heaven with all those virgins awaiting them.

Jerry, forgot to add: Re Saddam and understanding his culture...surely you've read my earlier thoughts on this. Bush was wrong to contemplate a democratic state in a Muslim culture and Barry is wrong because he thinks nice will work.

The best thing we can ever hope for is a benevolent dictator in any Muslim nation...that's it, no other possibility.

Reality sucks! Who is in touch? I grew up in a differentt age. Will it end well? The beauty of it all!

Saddled with debts, no jobs, no chance for a family life and future like we grew up with - How long before ISIS starts recruiting our youth for some North American acts of terrorism?
The golfer-in-chief fiddles while America goes up in smoke!

This is merely one of the great risks the public assumes when it puts into the Presidency a man who is completely unqualified. Some Presidents grow into the office - George Bush did that, whether you like him or not. Obama hasn't. As a result of his actions, he is not trusted by our allies and is not respected by our enemies - a very bad situation to be in if you are the USA. Like you said, I cannot imagine Putin pulling this crap if Ronald Reagan was in office - Putin would get one warning and would then be recovering dead Russian airmen from the North Atlantic. In many ways, unfortunately, Obama is merely a mirror of the US - a fading giant, obsessed with toys and amusements in a world of deadly serious issues. The man-king plays golf with the rich (those same people he disparages whenever he isn't in their backyards amusing himself or asking for $) and has celebrity chefs cook for him at the WH. As for the rest of the world, well, that's what he has a Sec of State for, right? We deserve all of this because we did this to ourselves.