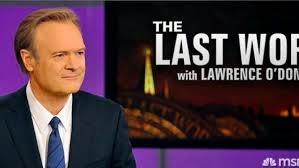 Radical liberal Lawrence O'Donnell has spent most of five years spewing hate toward the Koch brothers and their donations to conservative political causes.  Using his MSNBC show "The Last Word", O'Donnell has ripped the Kochs while totally ignoring the liberal billionaire big spenders in his own party.


So back in April O'Donnell is vacationing down in the Virgin Islands when the taxi he is riding in gets in an accident and he is severely injured; a crushed hip and injuries to his legs as well.  O'Donnell is medevaced back to New York and is admitted to one of the few hospitals that can treat his kind of injuries.

As O'Donnell is wheeled into the hospital the first thing he sees is a big bold sign dedicating this hospital wing after David Koch.  In great pain, O'Donnell tosses his politics away, doesn't ask to be taken to another hospital; instead he is seeking the very care that David Koch made possible.  You see, David Koch had donated $25 million dollars to make this specialized medical care available to predominantly liberal New York.   Koch saw a need and didn't question who would benefit, did not even consider politics, just saw a need and made it happen.

So O'Donnell returned to his show last Monday night and offered David Koch kind of a back handed compliment.  He said, while he still doesn't like the Koch brothers donating to conservative causes, he meekly offered his thanks for specialized medical care that might not have been available if not for David Koch.

Even after benefiting from the Koch's good will, O'Donnell had only praise for Harry Reid's daily "Koch Brothers" rant on the floor of the Senate.  You see, O'Donnell and Nasty Nancy, and Barack, and Harry Reid don't believe anything can be good that doesn't come from the government or union coffers.

Funny, but you won't ever see on MSNBC, or even any of the other main stream media outlets, anything about the hundreds of charities the Koch brothers donate to.  From New York's Lincoln Center to inner city charter schools, funding of medical research and building new hospitals, funding youth recreation centers in the inner city, minority scholarships, interest free loans for business start ups, and dozens of other worthwhile causes, the Koch's are able to bypass the government bureaucracy and get good things done.

And they literally saved Lawrence O'Donnell's liberal ass at a time when he needed it the most.

In this case it was good for someone who hates the guys. Just read another "karma" thing yesterday. A couple who voted for Obama both times just had their old health care policy cancelled and were put on Obamacare. Premiums went from $400 a month to $1350 a month and they are not happy. ;)

WOW! Now THAT'S an icy cold shot in the face!!!

Only the left claims to know what is in a persons' heart. The focus on good, decent, outstanding people by the left is backfiring. I fear for the Republic because the end justifies the means to the sociopath O'Donnel.

I agree anon...but if the liberals don't demonize conservatives they have no chance to win an argument...they certainly can't win on the facts so they gin up anger and hate among the masses for anyone that is wealthy and successful. (unless you make your money by moving your lips...ala Bill and Killary)