Are We Now A Criminal Nation? 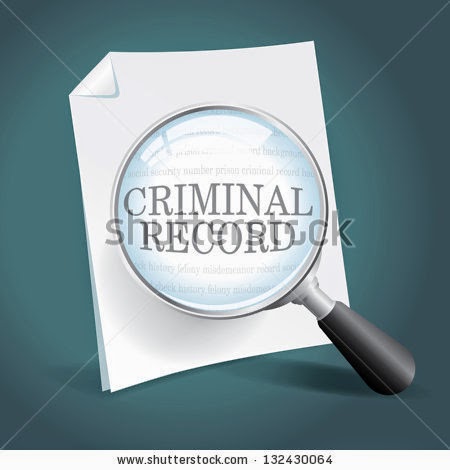 So yesterday I'm on my way to Colonel Sanders.  I've got NPR (National Public Radio) going in the car.  And, damned if it's not a sob story about Americans with a criminal record who can't accompany their child on a school field trip, get a barber or beauty license, or even call a game of bingo because of past transgressions.

Then the moderator said there are 69 million Americans with a criminal record!  69 million!  Are you kidding me?  I've been tromping around for more than half a century and have never even had a speeding ticket!  And we've got 69 million people who've done jail time?  In the words of Mr. Barone; "holy crap!".

I couldn't leave this alone.  So I picked up my chicken, went back home, fired up the computer and googled American demographics while chewing on a chicken leg, extra crispy.  So I find out that there are now approximately 315 million Americans.  Of that number, 80 million are children.  Another 40 million are old goats like me, over 65 years old.  And yeah, you guessed it; I subtracted that 120 million children and geezers and I come up with 175 million of you deviants!  Now folks, that comes out to a just horrible stat!  More than one in three of you own a criminal record!  One in three!    Think about it!  Three of you are hanging about the counter at Starbucks and at least one of you has done time!  Nine or ten of you are sitting in the doctor's office waiting room and at least a trio of you could swap jail experiences about dropping your soap bar in the communal shower!  And I don't even want to think about how high that ratio soars in a Walmart check out line!

Okay, I know that's a bit hyperbolic; many of you escaped with probation, or time served or some such thing.  Still; 69 million?

But, take heart folks!  The NPR program offered the cheery news that Obama and Attorney General Eric Holder are not only working to affect early release of millions of career criminals, but the Justice czar is also formulating a plan to expunge the criminal records of tens of millions of Americans so that they can aspire to achieve political office, employ straight razors to shave you, hook you up to an I.V., attend a showing of Harry Potter with little Johnny at Disneyworld...and yes, call B-29 at the local bingo parlor.

WOW that is a lot of criminals!That's all I got.Have a good Monday, watch your back.

Back watched, Craig...have a good week.

Yes, USA! We are #1. that is the only statistic left where we prevail. #1 in citizen arrests and #1 in total incarcerated! and something like #48 in education and 36 in science, right in there with backwater African nations.
Gee, do ya think something is wrong?The idea that we could solve this problem by changing definitions and expunging records is appalling. We are #1 because we don't give a shit, have no pride, no responsibility, and no values. very, very sad.

Jerry, don't know if you've seen this one but it is said with greater clarity than anything I could offer on this:

Being convicted of a crime does not mean you have "done time".

Yes, thank you, I have seen that before, several times and each time I cry. A powerful five minutes of television and should be required watching.

Anon..(and I know you're the liberal one), please go to your Funk and Wagnall's and look up "tongue in cheek". It seems all my "Republithug" friends got it and you didn't...but then I'm not surprised.