"Hell In A Very Small Place"

In today's world it simply couldn't happen.  No one these days is willing to accept those kind of casualties.  Utah Beach would find thousands fall in the first hours.  At Omaha Beach alone 12,000 would fall in the first hours with more than 4,000 American dead.  The Normandy Landings took place over 50 miles along the Normandy Coast and it was the Americans who would incur the heaviest hail of German fire, who would storm the beach with the largest concentrations of land mines and obstacles, it would be Americans who would scale that 50 foot sea wall, many to meet their death.  The Canadians and the Brits and a handful of Free French would assault the less fortified three sectors of coastline.

It was Rommel himself who had designed the concrete and iron defensive fortifications at Normandy and he did his job well.  The Germans enjoyed a 15-1 kill ratio on that fateful day.  The success of Operation Overlord was so tentative, so fraught with peril that Dwight Eisenhower would sit down at his desk and pen a letter of apology for its failure, while taking full responsibility for it.

Winston Churchill had wanted to attempt a landing as early as 1942.  Desperate to avenge the German butchery of his own citizens he lusted for quick retribution.  Unfortunately, America, despite her great war manufacturing prowess, simply could not produce enough landing craft to make that happen.  So we battled the Fascists and the Nazi's in the Mediterranean and in Africa and up the Italian boot...but, to stop the Hitler war machine it was inevitable that we would have to secure a European beachhead and drive all the way to Berlin to win a war that would take the lives of 50 million people.

The first stages of Operation Overlord would begin shortly after midnight on 6 June.  Allied bombers tried in vain to "soften the target" through saturation bombing.  An hour or so later 24,000 airborne troops from the American 82nd and 101st Air Born Divisions would parachute behind the lines of German coastal fortifications.  They would keep busy trying to intercept German enforcements who would surely come once the first landing craft were spotted.

As dawn broke on Omaha and Utah beach American Infantrymen began the long slow crawl toward the beachhead.  They would face the heaviest enemy fire in the history of warfare and many would drown in the shallows or might be lucky to reach the beach only to die there.

But they kept coming.  There was no place to retreat, no place to shelter and re-consider their fates...they had to just keep coming, crawling through a sea of dead comrades,  hell bent on scaling that wall and somehow stopping that murderous hail of gunfire.

On the morning of D-Day Pvt. Barrett, landing in the face of extremely heavy enemy fire, was forced to wade ashore through neck-deep water. Disregarding the personal danger, he returned to the surf again and again to assist his floundering comrades and save them from drowning.
Refusing to remain pinned down by the intense barrage of small-arms and mortar fire poured at the landing points, Pvt. Barrett, working with fierce determination, saved many lives by carrying casualties to an evacuation boat lying offshore.
In addition to his assigned mission as guide, he carried dispatches the length of the fire-swept beach; he assisted the wounded; he calmed the shocked; he arose as a leader in the stress of the occasion. His coolness and his dauntless daring courage while constantly risking his life during a period of many hours had an inestimable effect on his comrades and is in keeping with the highest traditions of the U.S. Army.

1st Lt. Monteith landed with the initial assault waves on the coast of France under heavy enemy fire. Without regard to his own personal safety he continually moved up and down the beach reorganizing men for further assault.
He then led the assault over a narrow protective ledge and across the flat, exposed terrain to the comparative safety of a cliff. Retracing his steps across the field to the beach, he moved over to where two tanks were buttoned up and blind under violent enemy artillery and machinegun fire. Completely exposed to the intense fire, 1st Lt. Monteith led the tanks on foot through a minefield and into firing positions. Under his direction several enemy positions were destroyed.
He then rejoined his company and under his leadership his men captured an advantageous position on the hill. Supervising the defense of his newly won position against repeated vicious counterattacks, he continued to ignore his own personal safety, repeatedly crossing the 200 or 300 yards of open terrain under heavy fire to strengthen links in his defensive chain.
When the enemy succeeded in completely surrounding 1st Lt. Monteith and his unit and while leading the fight out of the situation, 1st Lt. Monteith was killed by enemy fire.
The courage, gallantry, and intrepid leadership displayed by 1st Lt. Monteith is worthy of emulation.

On D-day, Technician 5th Grade Pinder landed on the coast 100 yards off shore under devastating enemy machinegun and artillery fire which caused severe casualties among the boatload. Carrying a vitally important radio, he struggled towards shore in waist-deep water. Only a few yards from his craft he was hit by enemy fire and was gravely wounded.
Technician 5th Grade Pinder never stopped. He made shore and delivered the radio. Refusing to take cover afforded, or to accept medical attention for his wounds, Technician 5th Grade Pinder, though terribly weakened by loss of blood and in fierce pain, on three occasions went into the fire-swept surf to salvage communication equipment. He recovered many vital parts and equipment, including another workable radio. On the 3rd trip he was again hit, suffering machinegun bullet wounds in the legs.
Still this valiant soldier would not stop for rest or medical attention. Remaining exposed to heavy enemy fire, growing steadily weaker, he aided in establishing the vital radio communication on the beach. While so engaged this dauntless soldier was hit for the third time and killed.
The indomitable courage and personal bravery of Technician 5th Grade Pinder was a magnificent inspiration to the men with whom he served.

After two verbal requests to accompany the leading assault elements in the Normandy invasion had been denied, Brig. Gen. Roosevelt's written request for this mission was approved and he landed with the first wave of the forces assaulting the enemy-held beaches.
He repeatedly led groups from the beach, over the seawall and established them inland. His valor, courage, and presence in the very front of the attack and his complete unconcern at being under heavy fire inspired the troops to heights of enthusiasm and self-sacrifice.
Although the enemy had the beach under constant direct fire, Brig. Gen. Roosevelt moved from one locality to another, rallying men around him, directed and personally led them against the enemy. Under his seasoned, precise, calm, and unfaltering leadership, assault troops reduced beach strong points and rapidly moved inland with minimum casualties. He thus contributed substantially to the successful establishment of the beachhead in France.

And so they did.  But even after landing sufficient forces to do battle it would be days of hard fighting, and twelve days before all five sectors would be able to hook up and begin the hard slow drive to Berlin. 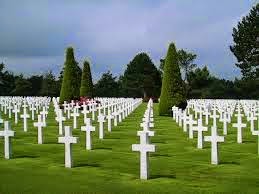 Today, politicians will stand on the cliffs of Normandy and make speeches.  They will speak of heroism and freedom and sacrifice as old men, once fit, and brown and brawny, will sit in chairs and recall a day when hell was in session.  And above the lofty speechifying they will hear the cries of their comrades, they will recall the sound of a thousand death rattles and they will hear once again the  sounds of hell that rained down on them that historic day.

And later, when the politicians have retreated to their limos, and go somewhere to have coffee and cake, the "old ones" will walk the hedge rows of crosses of St. Germaine and St. Lo, and reach out, fingers trembling with age, and caress the headstone of a friend, a comrade who paid the ultimate price..and wonder how and why they survived it all.

God bless them.  Surely heaven has a place for these men who have already spent some time in hell.

so few or no comments is kind of scary! I can not imagine the Hell our Military, all the forces, went through on That Day, subsequent days and for years thereafter with no end in sight. I have the luxury thanks to these men in uniform of also not being able to imagine a world had we lost that war! I think the secret police would have shut us down long ago and thankful that they haven't (yet!). I have not been to Normandy but went to Arlington and seen mile after mile, crosses all in a row. A testament to those who gave their lives and maybe, for our sins! The celebration of D-Day has become another excuse for a barbeque, another day without reflection of how we got here and who had to die in order to make our lives easy.
Timely post today, thank you for your service.

Jerry, thank you for taking the time to comment on my effort. Yes, I too am disappointed with so few comments...but I am not surprised.

Just a few hours ago I was speculating on what will go viral for me and what won't. The Burger King leaving military bases has now risen in less than thirty days to be my most read blog of all time with 10,000 page views, with another 700 or 800 reads today. In contrast, my humble effort to describe the supreme heroism of those boys on June 6th got fewer than 20 reads today.

Two other essays have racked up 500 or more page views today, neither of which are, in my mind, as good as today's.

But I have written what I thought was pure elegance and they ended up generating not a single comment, so I can't ever guess what is going to prove popular....if I could I would have 10,000 page views every day.

Thanks again, my "liberal" friend.