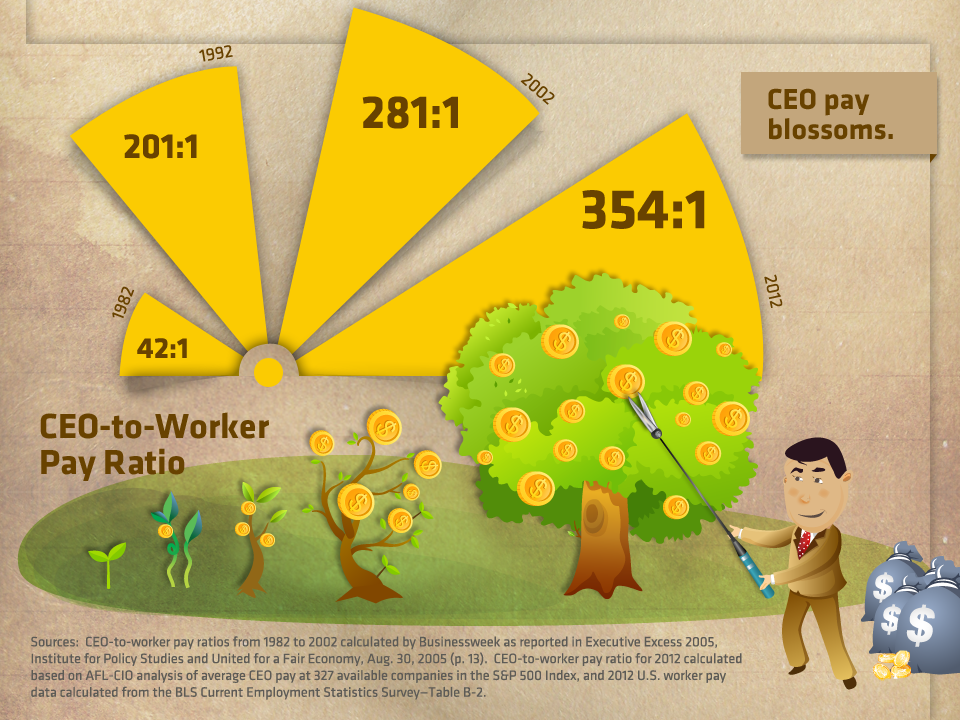 Note to readers:    The page view count for this month is easily going to top 50,000 page views, a full 29,000 over my previous monthly high (last month) of 21,300.  However the vast majority of the page views came from three blog essays which went viral.  However, of my 57 followers, I'm only getting 20 page views a day, a mere third.  This clearly indicates I have saturated my readers with too many of these blogs.  So, effective 1 July I'm going on hiatus.  I think I can be more productive working on some short stories now in draft.  The break might be a week or two, or longer, depending on national events.  Just wanted to let everyone know why this blog won't be showing up in  your mail box for awhile.

The problem with doing anything about income inequality these days is that the problem is so damn complex.  Unfortunately, politics being what they are, no one is willing to meet somewhere in the middle to formulate a solution.  And there is a middle, and it need not require anyone to compromise their principles in order to achieve a solution.

Conservatives will tell you that income inequality is simply the watchword for liberal socialism.  Liberals will tell you income inequality is simply the "fat cats" getting more than their share and demanding the "fat" be redistributed....but they only want that to be done by the government...with the accompanying favor they might enjoy at the ballot box by making that happen.

The problem is that income inequality exists on both ends of the economic spectrum.  In America today it is entirely possible that a family on welfare fares far better than a similar family where both adults are holding down jobs.  Free Medicaid, generous food stamps, Section 8 housing vouchers, free school lunches, low income utilities assistance and a welfare check gives a huge leg up for those existing on the public dole over those families whose combined income disqualifies them, or they elect not to take freebies because of a personal sense of pride.  That too is income inequality.  So why can't we create an incentive to work by providing more help to the working poor and requiring those not working but drawing a check, to train for a job, and even provide supplemental benefits after a welfare candidate begins work?  If someone on welfare takes a job, today they lose all their medicaid benefits and perhaps their food stamp support as well...why not provide an incentive to get off the public dole by helping them along until they can develop a work ethic and begin to help themselves? And let's put a time limit on benefits for anyone who is capable of working!

And by same token, the government should help those who are really trying to make it but can't because their paychecks are simply not enough to support a family.  Instead, the Democrats want to dole it out in wasteful programs that are infested with waste, fraud and abuse.  And the Republicans aren't much better; they want to dole it out in earned income credits and child tax credits.  First of all, I would like the IRS to stop being another form of welfare, and, secondly, I want the child tax credit to stop being an incentive for folks to breed children that they can't afford to support!

Instead, let's challenge our government to put in place incentives for folks to get out and work.  Make welfare "workfare" and train those on welfare to work as teacher's aides, hospice workers, hospital orderlies, meals on wheels delivery drivers, school crossing guards, and yes, even community organizers. As for middle class working families, let's start helping them by eliminating the marriage penalty for tax status reporting.

Lets begin "matching programs" for low income workers.  Eliminate Obamacare and begin matching one for one every dollar a worker puts into a health savings account that can be withdrawn tax free to meet medical needs.  Instead of "no doc" and "low down payment home loans" lets reward middle class borrowers with a 5% match on anyone who pays more than 30% down on a home loan, having real skin in the game and being less likely to miss their mortgage payments.  Assess a 5% tax on anyone who doesn't honor the deal to recoup the taxpayer loss.  Let's expand the role of the Small Business Administration and free up federal money to encourage small business development.  Let's quit giving free breakfast and lunch to illegal aliens and knock off 25% off the price of a school lunch for American kids of working families.  Same thing with college tuition; quit giving "in state" or free tuition to illegal aliens and use that money to bring down the costs of college for American kids.  The liberal courts have been hell on cities and states trying to cease giving benefits to illegal aliens but not one court has ordered schools to give free lunches or cheap tuition to illegal aliens!

But we need to do something about the explosion in CEO pay as well.  As the chart above illustrates, in 1982 the ratio of CEO pay to the average pay of an employee in the company he heads was 42:1.  That ratio has blossomed to the current ratio of 354:1.  Folks, this is Cleopatra and milk bath stuff..this is obscene!

But what do we do about it?  As conservatives, the last thing we want is to have the government get involved in confiscating wealth.  If forced to choose, I'll choose the CEO pay obscenity over the obscenity of government waste, fraud and abuse, and the government's use of confiscated wealth to both encourage citizen sloth and vote buying.

The ideal solution would be for shareholders to become more active at those shareholder meetings and stop this CEO pay madness.  Or perhaps the Tea Party and the Occupiers ought to get together and lead protest marches on the front steps of the CEO of General Electric and IBM.   Though both factions seek different goals they would do well to form a united front to stem the wave of corporate excess.  We really don't need government to step in and confiscate even more than the 70% share of all taxes that the wealthy already pay.  But this greed will remain a problem until social pressures are imposed upon these greed merchants.  We've got to stop this "bottom line thinking" where every corporation is laying off American workers and exporting jobs just to add .32 cents a share to the profit report!

I wholeheartedly agree with Barack Obama's stated desire to reward companies who bring jobs back home...but the problem is he just makes speeches that demonize business generally and doesn't work the problem with real leadership.  Both parties in Congress are largely bought and paid for by the K Street lobbyists and that's where Obama should be pointing a finger.  We need to throw out the corrupt on Capitol Hill and implement programs that support the American worker...and that corruption includes Barack Obama who talks the talk but doesn't walk the walk...seeing as he has so much of his political supporters from business cronies.  Each time Obama goes out and demonizes business the fat cats just sit back and smile...they know Obama will never exert the leadership necessary to clean house.

I just scanned a list of the CEO pay for 2012.  In many instances CEO pay doubled and tripled into eight digit madness while the company they headed actually showed business declines.  When CEO pay is no longer tied to performance we know something is wrong.

It's too bad that our politicians can only see our national issues in black and white and stop clinging to hard and fast ideologies.   At least in the instance of income inequality the answer can only be found in those shades of gray.

Wouldn't it be wonderful if big government stopped streaming money to win political influence? And wouldn't it be wonderful if both sides were honest enough to admit there's income inequality on both ends of the financial spectrum...and deal with the fixes that are completely solvable if anyone was willing to be honest and upfront about what is wrong with this country?

"honest and upfront"? never happen!
I just finished watching the second season of "BOSS" with Kelsey Grammer, that's how government works.((
I'll miss your blog, nice "fair and balanced" today!
The most exiting thing in the whole world happened yesterday. I had my first ripe tomato and a wonderful BLT!!!! all is good.

exciting! I hope that wasn't Freudian!

Thanks, Jerry. Your late tomato crop is making me feel much better. I've been getting a few ripened for a couple of weeks now.

My challenge is probably different from yours; the high heat has stressed out the tomato plants and they just don't want to ripen....even though I planted them in partial shade.

Nothing freudian about enjoying a good tomato, buddy!

You once again make complete sense.Elect me President, I have some things in my past,no worse the bong boy barry, I really do not care if anybody "likes me".Double the Secret Service cuz I am gonna piss off ALOT of people.Lastly I am not for sale! Good luck with your writing.Sad to see you take a break, will be looking forward to your return.Even if only occaisonally.

Enjoy your break and your short story writing. I'd love to purchase some of your work, if you list it! Good time to write........nothing much else to do in this summer heat in Phoenix! Well, except swim.

Craig, let me know when you throw your hat in the ring! I'll vote for you!

I just wanted to say that while I'm not one of the 57, I am a recent email subscriber to your blog and do check it out each time it comes to my inbox. However I usually read it there instead of here, which doesn't show up as a page view. Sheer laziness on my part as I do know better. My apologies.

hi Stephanie...I didn't know that if one reads from the email that it doesn't show up as a page view.

No matter...I'm not going away for long..just taking a short break to work on some short stories.

Thanks for being a regular reader!

I believe that may be the reason so many bloggers are truncating their posts in their emails, so one has to go to the blog site to read the entire article.

Stephanie I just researched how to truncate my blog. Please let me know tomorrow what the layout looks like as AI cannot see it myself. Thanks for all the great help!