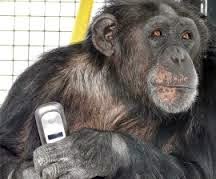 You saw it when they were canonizing two popes.  You see it at birthday parties, and graduations, Presidential inaugurations, mob robs, armed robberies, beating up innocents...you see it a hundred times a day.  It is Americans holding up their cell phones to commemorate some momentous event.  Rather than "living in the moment",  rather than soaking up an experience, rather than internalizing a personal event, Americans have their eyes behind a smart phone filming the god-damn thing.  Then they can load it up on Facebook or U-Tube and it becomes their "post of the day".

So very sad.  Americans today are like digital chimpanzees; they invest so little emotional substance to their lives that they are truly as limited in intellectual scope as a chimp with a banana to its ear.  Everything is now a "Kodak moment" and nothing is real if it is not digitally captured...all the while it is so lightly recorded in either heart or brain.  No event, no degree of importance is attached to anything if it is not digitally captured for posterity...or until it is relegated to a Facebook archive.

A kid will sit at his desk and text his friends as his teacher "drones" on about history, or modern literature, or the elements of Algebra.  He racks up as many "Facebook friends" as he can accrue on his Facebook page...but can't tell you the name of the kid sitting right next to him in class.  In less than a minute he can google the players in the Russian-Ukraine conflict...but doesn't know where those countries are, nor what the conflict is about.  He knows the top selling download on I-tunes but can't tell you the name of the current Vice President of the United States.  He can recite the entire last night's script from "Glee" but can't give you the years the Civil War was fought.

At least a hundred teen and adult drivers will drive themselves under the carriage of a freight truck today because they are too occupied with texting a friend about what song is playing on their iPod, or what Susie told Teddy in study hall today.  Adult drivers are no different; they will drive themselves into oblivion while texting about the last exit they passed on I-75 and what they're planning for dinner.

Emotionally remote, intellectually malnourished digital monkeys.  Back in the early fifties, the chairman of the Federal Communications Commission lamented the terrible waste of television technology, referring to the then current TV fare as "the vast waste land".  Today, Americans have doubled down on that.  It seems the more technology we have the dumber so many of us get.

When I first entered the internet in 1995 I found it to be the most marvelous technological achievement of the past century.  All of a sudden I found myself rewarded with a thousands sets of encyclopedias, hundreds of libraries, millions of sources for knowledge I so desperately crave, that, before the internet, was a slow and time costly process.  I have often said that the knowledge I have accrued in these past twenty years are easily equivalent to half a dozen master degrees.  I thought at that time that the internet was what would save us, what would lift the lizard lids of a 100 million sets of eyes, and bring knowledge to the masses.  In my case, and in many others, that was true.  Sadly, for the vast majority, that technology is wasted....on monkeys chirping into smart phones and texting in formats where spelling, or even meaning, have little weight.

I can't imagine, dear readers, than any of you are stupid enough to make your smart phone a substitute for the two good eyes that God gave you.  I hope you can still spell "your" after typing "ur" for years.  I hope you have made the effort to see the shine in your child eyes when blowing out the candles on a birthday cake in "real time" and not the digital version of same.  If you are filming every damn thing that happens all day, have a banana....if you're still observing life in real time, good for you.

We ARE going to become friends; is it possible to agree with you 110%?
I am far more from the 19th Century than this apocalyptic 21st! I don't own a cell phone let alone a smart phone. Do they still have pictures of cheeseburgers on McDonald's cash registers? It seems that no one bothers to learn the Times Tables and simple math. It is a transference of our brain to the computer chip in our smart phones! and soon enough, an appt for emotions! One more thing we just don't have to deal with. We no longer fear "The Borg", we have become "The Borg"!

Jerry, a week or two after I put this one in draft I heard an NPR program about this very subject. I didn't include it here but NPR was interviewing a researcher at an Eastern University.

They ran a study where they had half of a group record everything they deemed important. The other half were told not to. Then they tested which group had the best recall memory of particular events and those who had used their eyes alone had the most accurate recall of events. Sigh.