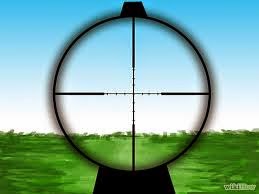 Anyone who reads this blog regularly knows that I cannot stand Barack Hussein Obama.  But, frankly, I fear for Obama's life....I'm afraid that these last few months of just horrible Presidential leadership has spawned a whole new group of potential assassins.  I will tell you why that would be a terrible thing, but first let's look at those who might be thinking long and hard about putting Obama in the ground.

First we have the "usual suspects"; those wing nuts who just can't stand seeing a "negro" in the oval office.  The Secret Service has done a damn fine job of finding and arresting some dozen Obama assassination plots during his six years in office.  But I fear Obama's negligence at protecting our borders and a perceived failure in the Middle East may spark a blossoming of even more of these kinds of folks.

Second, the attitude of the militia types are hardening.  I'm afraid that a number of these folks see the only way to save this country is to blow Obama's brains out.  They, rightly or wrongly, see Obama as one who is trying to create a "one world order" as he pacifies our enemies and sits by as hundreds of thousands of illegal Hispanics join the millions already here and are reluctant to leave.

But there's a new breed of international forces who would like nothing more than to see Obama taken out.  Three countries that come to mind are Israel, Kuwait and Saudi Arabia.  Israel feels like an orphan child as Obama's policies have worked toward isolating them in the world community.  While they don't have unlimited money resources they have always shown a great capacity for executing stealthy maneuverings to improve their security posture.  That raid on Sadaam Hussein's nuclear facilities in the 80's was accomplished without American support or even America's blessing.  And now Israel sees Obama cuddling up to Iran, the nation that Israel deems as their greatest safety threat. One good Mossad agent could resolve Israel's problem.

But the most imminent threat might come from two of our middle east allies, Kuwait and Saudi Arabia,  who possess the massive wealth that makes them capable of sourcing and funding an Obama assassination.   If you think that's far fetched consider the geography folks.  Kuwait lies just at the foot of those ISIS maniacs running roughshod over Iraq and Kuwait sees both their government and their oil fields in peril should ISIS decide to expand their Muslim caliphate by invasion...they would surely take Kuwait in a day or two, just as Saddam did in '89.

The exact same threat exists for well funded Saudi Arabia.  The Saudis have taken a good look at Obama's "non-work" in Egypt, Syria, Lebanon, Iraq and a nuclear capable Iran.  The Saudis are desperate for the old fashioned American controlled stability of the old days.  Since Obama first flirted with Muslim fanatics in his first days in office the Saudis have been very nervous.  The Saudis now know, should Iran launch a few nuclear missiles, or should the ISIS come flowing across their northern border, Obama will not come to their defense as George H.W. Bush did with Desert Shield/Desert Storm.  The oil rich Saudis will not sit on this problem for long.  Even now they may be weighing all their options..and if a bullet to Obama's head can solve their problem, well that's an option worth considering.  The Saudis also know Obama's $10 dollar a gallon gas will cost them millions of barrels on yearly oil sales to gas hungry America.

Having laid out the sources of the threat, here's why I believe an Obama assassination is a terrible idea.

All one needs to do is look at the Kennedy assassination to see what martyrdom can do.  When John Kennedy was killed in Dallas Lyndon Johnson rode that Kennedy martyrdom to pass those War on Poverty programs that bred three generations of welfare queens and has cost us more than $70 trillion dollars in state and federal dollars to keep those programs funded.

Look for that same martyrdom should Obama eat a bullet.  Joe and Harry and Nasty Nancy would be crying crocodile tears in the halls of Congress, beseeching a sympathetic America to go "all socialist" on every federal program in existence....just to honor a man-child who should never have been President.  And if you think liberals scream "racist" now, just imagine how bad it would be with Obama dead.  In honor of Barack Hussein Obama we might even just pull our border patrol off the border and declare America a "free zone" to any and all of Latin America who might want to come in.

No, we don't need Obama to eat a bullet.  What we need is to elect enough Congressional men and women with the guts to impeach this power hungry socialist bastard.  There are more than enough charges that warrant an impeachment  Let's not send him to the grave...let's send the bastard to prison.  We might even send him to the same prison where all those Illinois governors have gone...
Posted by A Modest Scribler at 2:00 AM

Amen, as things spin out of control, rational thought is even more valuable. The poem "If" comes to mind right now.

I completely agree. He would already have been impeached if he was all white instead of half white.It would sure be a great sight to see barry as someones bitch in a cell next to blogoyivitch .(spelling, i know)

Anon, I can't think of a better poem to illustrate Obama's massive fail! Thanks for that!

Craig, you're right...if George Bush had pulled half of what Obama has pulled he's be in Leavenworth.

As much as I would like Obama gone, impeachment is not a viable alternative. What will we end up with? .... Uncle Douchebag, Joe Biden. No thank you. At this stage of the game, I'm just counting down the days until Jan. 20, 2017. Just 942 to go.


What I'm really wondering is what the response from all the liberal, pants-wetting Obama lovers will be when after he's term-limited out, they find out he 'really' was born in Kenya.

Will Congress reverse and void everything he signed? If not, then no waiting for the 'next' election, they should be fired on the spot and replaced outright with a hand-picked appointee who will.

Anon, I think sending Obama to jail would be more than enough to keep old crazy Joe in line for a couple of years. thanks for your comments.