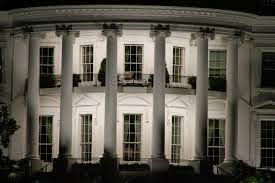 He just couldn't sleep this evening.  His mind was a war as cataclysmic events seemed to be falling on his head like a hard rain.  He got out of bed, donned a robe,  and left the family quarters, descending the dimly lit stairs, then walking out on to the south lawn.  The secret service stepped out on the porch and offered a "good evening, Mr. President", then stood like sentries on the two opposing pillars just behind Barack Obama.

"I'd like some time alone", he said, then walked out on to the lawn.  He took a moment and gazed up at the summer skies.  The moon was half full; enough to guide him over to a lawn table just beyond Michelle's garden.  He sat down heavily and crossed his legs.  This was the same table where I was forced to eat crow a few years ago, he reflected.  Back when I wrongly took the side of a drunken Black Cambridge college professor over that of the local cop.  Had to stage a peace conference to save face...that now infamous "beer summit."

That thought brought back all of his current worries.  He thought of Sisyphus and those wax wings flying too damn close to the sun.  How many times have I stepped in it?, he thought.  All I've ever wanted to do is be admired...yes worshipped a little too, but who doesn't?  Why isn't the rhetoric working anymore?  Why do I always seem to be a day, or a month, or a year late in identifying a problem and doing something about it?

My critics say I don't "get it"...that I've been too pampered all my life..that I've always relied on my charm as a substitute for character...is that true?  Was my granny and grandpa too doting?  Did I develop a sense of entitlement when I hogged more than my share of a toke when hanging out with my dope smoking buddies?  Was I given too much because I was a mulatto White and could enunciate like a White man?

And what about that lady upstairs that shares my bed?  Did I marry her to gain another "mother figure in my life?"  Am I really that weak a man?...are all my divisive speeches just a way to break out of my "man-child self?"

God, were those first months great!  I was worshipped by millions, given the Nobel Peace Prize before the new paint dried in the Oval Office, and I was deemed a near savior...the second coming of the mythical Christ!  Yeah, those were the days!  Millions bought my books, studied my magic words and made me immensely wealthy!

So what have I got now?  Even with half of my first term mafia gone, we had enough "plotters" to game out a political war against my enemies.  The IRS did a damn fine job neutering those conservative groups.  Eric was able to bury Fast and Furious.  We got in a little hot water on the NSA spying and the AP journalist wire tapping but those died in the Justice Department as well.  Enough people at State fell on their swords and I came away from Benghazi relatively unscathed...poor Hillary; she should have never uttered that "what does it matter?" stuff...she'll be living with that for a long time.

No, we can game away most of what the House is trying to throw my way.  It's those damn Muslims that I befriended in those early months!  They've made me look bad time and again.  First in Egypt, then Libya, then Syria, and now that ungodly mess in Iraq!  I put those people on a pedestal, spoke gently to them...and they repaid me by descending into murderous chaos, sending my poll numbers down to Bush type numbers!

And good lord!  This immigration mess has gotten worse.  I still can't figure that one out.  All I did was grant amnesty to a couple of million illegal kids and half of Latin America send their kids across the border!   Who the hell saw that coming?  Now I've got the whole of the America populace mad at me, both citizens and the 30 million Mexicans who were counting on me to deliver them citizenship!
I've got as much chance of passing an immigration bill now as Bill has of staying faithful to Hillary!

Sighing heavily, Barack Obama stood, drew his night robe tighter around him, and headed back toward the back door of the White House.  He paused once and turned and looked back at the old "beer summit" table and wished that was the only problem he had to worry about these days.  He then turned back to return to bed....he had a busy day tomorrow:  he had an early golf date, then an afternoon fundraiser to attend......

You have nailed him. I still can not believe that my country voted for that charlatan twice. And people you would not believe would vote for him. It had to be a since of guilt that got him elected.
Corky

Thanks, Corky...no doubt there was a lot of White guilt that won him many votes.

Scribler, this post wasn't truncated in the email. I did enjoy it though. The inward musings of a narcissist.

Yes, Carol emailed me earlier and pointed that out. I edited to truncate later...after you received yours in the email. I have to truncate manually and am already forgetting to do it. Hopefully it will become a habit as I continue to do it.