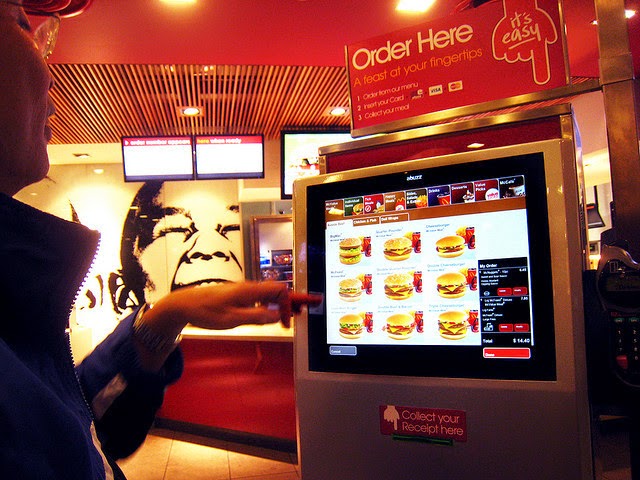 Well, we learned yesterday that the socialist city council in Seattle voted to raise the minimum wage to $15 dollars an hour.  They join Chicago and a host of other liberally run municipalities mandating the $15 per hour wage.

Even California hasn't demanded those kind of wages; that liberal state has mandated $9 per hour now and it goes to $10 per hour next year.  Accordingly CKE, the parent company of Hardy's and Carl Juniors have announced their franchisees are fleeing the state in droves.  The CEO said that the costs of Obamacare, utilities, regulation compliance and higher taxes just will not support their business model.  Those that are sticking around say they'll hire fewer workers.

But it's not just fast food joints that are embracing an automated ordering system.  Wild Wings, Panera Bread, Chili's and Applebees are installing IPADs at every table, enabling the customer to place his order, cut the service time in half and enable those establishments to halve their work force.

These businesses are installing kiosks where you both order and pay for your meal without having to interact with an employee...and they are doing it faster than Obama can travel around the country and demonize them for not paying $10.10 or $13 or $15 per hour.

I'm sure Barack Hussein Obama didn't look at the numbers in the employee work force, but I did.
Here's a few numbers.  There are currently 3.65 million fast food workers across America.  There are another 2.3 million who work in full service restaurants.  That is about one hair net short of 6 million workers.  If the kiosk model is implemented half of those 6 million will lose their jobs.

And, of course those of us who can still add two and two know that we'll be dishing out more taxpayer money for unemployment checks, food stamps, welfare and Section 8 housing for all those terminally unemployed.  And that's 3 million fewer paychecks deducting social security and income taxes, resulting in less revenue for city, state and the feds.

Even the big hotel chains are getting into the act to manage their labor costs.  Hotels that once gave their employees one free meal per shift are eliminating that benefit, as well as paying for uniform cleaning...some have even begun ending healthcare benefits and throwing their employees under the Obamacare bus.

Irony of irony:  even those tenderhearted liberals in Seattle are concerned about the city council's action.  They worry that their teen will not have a job and worry about higher crime rates as more teens are on the streets and not at work somewhere.  They should feel bad; a great number of those minimum wage jobs were filled by folks who fall below the poverty level.

One bright spot did emerge from all this.  One franchise owner said that, at $15 dollars an hour, he won't be hiring any additional people, that he'll expect employees to do more to earn that pay rate, that he won't be hiring any hormonal teen, or borderline acceptable worker.  He said he's been flooded with applications for these $15 dollar an hour jobs...that if he has to pay "cream" wages he'll only be hiring the cream of the crop....and the rest can go home and live in Daddy's basement.

So who wins here folks?  Yep...the free market as it always does.  Get ready to press 1 for a Big Mac, press 2 if you want the combo, slide you debit or credit card in the slot and tell Obama to go straight to hell.

This is an interesting issue and one that might make or break our Capitalistic System. It is the Conservative side of me that is in favor of higher wages! What you are missing in your numbers and research are the "working poor", the people we help with tax supported incentives: working, yet eligible for Food Stamps, Housing Assistance, Subsidized Health Care, the vast array of Government Assistance supported by the taxpayer. A free market system should support itself without government help. I am tired of these government handouts and think there has to be a solution from business and industry. It is not because I am a Liberal that I support a gradual (over the next 7 years!) increase in minimum wage, it is because I am Conservative and would like to keep my money for more important things,

Jerry, you either subsidize "societal losers" by your taxes going for government program, or you subsidize them by paying $8 bucks for a hamburger.

With either of those false choices you are encouraging school drop-outs and sloth and career burger flippers (remember all those complaints on fast food wages coming from ten year "career burger flippers?)....at this point the market just won't support a $15 dollar an hour wage to flip a burger...there's not even a learning curve in these jobs. I have an upcoming blog on income inequality that addresses some of these issues...stay tuned.

For now, why can't we give notice to our illiterate dropouts that they need to finish school and take it seriously while they are there. And let's let our teens have these jobs so that they can learn a work ethic.

OK, I'm supposed to be welding, good thing I work for myself or I would be fired! I remember all too well when I made .90 cents per hour, the minimum wage so long ago! How Happy I was when it got raised to a buck and a quarter! Should the minimum wage be tied to anything? or just "what the market will bare"? I could be in favor of that if the taxpayer didn't subsidize those wages by government handouts. I find it ironic that Walmart teaches their employees how to get food stamps!
When I made $1.25 per hour my rent was $75. per month for a 2 bedroom house. Tunafish was 6 cans for a dollar, cigarettes were $1.75 per CARTON! gas was .23 per gallon and my entire utility bill was less than 20 bucks! I think a decent sit down breakfast has always been closely tied to minimum wage. I remember bacon, eggs, toast and hashbrowns for .90 cents and now that same breakfast is close to ten bucks! and no longer free coffee!
I don't know what kids these days are supposed to do for work or pride or self expression. I picked beans when they used to grow "Blue Lake Pole Beans". I think when minimum wage went to $2.25 per hour the farmers quit growing them and only plant machine harvestable bush beans. Far inferior. I remember when McDonalds used to advertize lunch, a hamburger, french fries and a milkshake and get change back for a dollar! Those days will never come back. It is still a $.19 cent hamburger, only now it costs a buck!
The restaurant business is tough. Contractors and the food industry have the highest rate of bankruptcy. Maybe the CEO of McDonalds makes millions but the owner of a small "mom and pop" certainly doesn't. Maybe this will be the end of fast food? That might be a good thing! Can't get hotdogs there any way! Times they are a changin! Kids can't even deliver newspapers anymore! I used to have a route of 90 customers, all within a few blocks. My carrier has a route of over 400 and delivers in his car over a 5 mile stretch!
Yes, I think there should be "Kids Jobs", career paths, some income for them other than the government or mommy. Our military used to be the "great equalizer", taking the riff-raff and failures of society and creating something from nothing. That was a good thing for a lot of people. What to do with them now?

I buy almost everything you said, Jerry.

Except the chief difference between then and now is that we took those minimum wage jobs as interim steps toward a more substantial and rewarding career.

Now, because we are producing a herd of illiterates, fast food and minimum wage jobs are all they are qualified to do. We were, back then, only limited by our age...a high school education was a mighty thing back then!

So what do we do? We do the painful thing....we teach those class clowns and underachieving little bastards a lesson! Study! Progress! Embrace an education for good technical training...but don't expect us to subsidize your failing lazy ass by paying $8 bucks for a hamburger!

Let's leave those $8 dollar jobs to the kids and not try to provide a living wage to adult societal failures.

Jerry, you and I both know that there are a thousand different permutations to this issue...we could delve into the collapse of the American job system, the exportation of jobs overseas, NAFTA, foreign competition, EPA mandates that make U.S. business more costly...any number of things that affect the job market from top to bottom.

As I said, I have a blog in draft that discusses employment problems, income inequality, etc.

But sometimes one just has to address a problem in a rudimentary way that leaves winners and losers...and Obama and his minions will never learn that, no matter how heavy the hand of government, somehow the free market will win out....Obama and the liberal way is to reward failure as equally as he rewards success and that just doesn't cut it....unless we really do collapse into socialism, then all bets are off.

Jerry, the only thing "right" about the military is that it teaches teamwork and discipline and responsibility..something that parents used to instill in our young people. That won't work anymore; the end of the draft saw to that and recent stats say over 60% of our youth are so unfit they can't pass the military's basic fitness test..nor could they pass the Armed Forces Qualification Test.

But you have hit on an idea! Bring back the draft, pull these little bastards kicking and screaming from their iPhones and Gaming systems and run their ass ragged around an obstacle course for a few months...then they can qualify for a "real" minimum wage job! My entry pay was $68 bucks a month, and based on the hours I put in, I got about ten cents an hour.