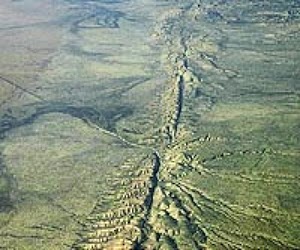 For those of you who wonder how I come up with some of these blog topics, well, today's blog is a good illustration of what flows from this twisted brain.  This particular blog has been bouncing around my brain for about two weeks.  It was driven by three things.  First, I was rummaging through some of my old books out in the garage and came across a novel called "Last Days of The Late Great State of California".  Written in the 60's by a fellow named Curt Gentry, I had read it with a bit of fascination at the time it was published.  The novel speculates on the consequences of having the San Andreas fault doing a once in a millennium grade eruption and sending a good size slice of California into the Pacific.

The second "prompt" came about while watching an episode of pawn stars.  Some guy brought in a 15th century era map of the new world...and California was depicted as an island.  Well, I already knew that some extremely lazy Spanish explorer came up the Sea of Cortez and assumed the whole damn state was an island.  So he he drew California as an island and hoped Triple AAA would never find out.

So these two tidbits were floating around in my brain like so much floss, and I'm minding my own business...just reading the Los Angeles Times online and came across an article that said some of those wacky Sacramento legislators were decrying the San Joaquin Valley's use of water to grow all those fruits and vegetables.   it seems the tree huggers are up in arms about the theory that saturating valley fields alters the valley water table and puts a strain on the San Andreas Fault.  They're afraid that all this farming is going to set off a huge earthquake and send the western part of the state adrift in the Pacific.

Well, pardon me but I didn't see this scenario as a tragedy at all.  So I call up an online google map of the fault and I see that ole "St. Andy" would take out San Francisco and the geeky liberals in the Silicon Valley, and then peel off to the south and take out Los Angeles, all the way out to Palm Springs.

So, Sacramento and Fresno and Bakersfield would be new seaside towns and Phoenix folks would be a hell of a lot closer to the Pacific and could drive their boats just a hop, skip and a jump to Indio to do their deep sea fishing.  Another advantage would be the "forced deportation" of 12 to 15 million illegals Mexicans, thus reducing illegal immigration by half.

Now Harry Reid wouldn't care for the earthquake much since half of Vegas casino business is driven by Californians riding I-15 every weekend to gamble their welfare money at Bally's or keeping I-80 hot as northern Californian surrender their money up in Tahoe and Reno.

But think how much nicer Nancy Pelosi and Diane Feinstein and Barbara Boxer would be.  Calmexifornia, the island, could emulate the laid back lifestyle of Hawaii and we'd have Nasty and Diane and Babs running around in grass skirts and taking hula lessons.  Might take their minds off turning citizens into liberal automatons and everyone would be far happier.

Yes, I admit "the big one" would probably take out some of California's veggie and fruit crops...but imagine how many fewer "nuts" we' d have to deal with.  :)
Posted by A Modest Scribler at 2:00 AM

I think you are after "Oceanfront property in Arizona"!

oh yeah, Jerry. Do you remember when Howard Hughes bought up all those casinos and land in Nevada? Some folks really believed he was doing it to have oceanfront property after the big one.

Have a good Sunday.

Love this one! Quite entertaining!

Thanks, Carol....stay cool out there in the far east valley!

Seems to me there is a lot of credibility to this theory. The envornazis have been talking about this ever since that story came out in the sixties. Rowan and Martin would often bring us more evidence on their weekly "news" show (well if it were aired today it would be considered credible objective news by MSNBC standard). Remember there is precedence. Senator Hank Johnson saved Guam from certain doom by suggesting control of the population distribution so as to circumvent the "tipping" over of that island. If the old drunk senator could see it, well wouldn't it just stand to reason it could happen here, and if we save just one life, isn't it, well, you know....I hope I'm standing on the other side of the fault when it happens!