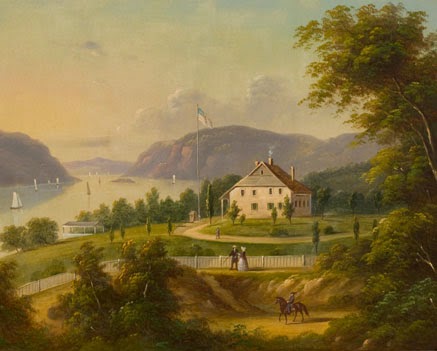 Note:  One of my grand pleasures is the reading of history.  I read with an open mind and try to stay away from any history where the author allows his personal politics to be injected into his reporting.  I enjoy learning the history of the "whole person", flaws and all.  One of my greatest joys has been my recent study of our first President.  Too many liberal historians these days want to write a history of Washington and spend half of the book talking about his ownership of slaves and nothing of his sacrifice and bravery nor, as President,  of his constant awareness of history as he sets the honorable precedents that so many will follow throughout our history.  Sadly, even the better educated among the baby boomers know a "cartoon" George Washington, who never cut down a cherry tree but perhaps never really did tell a lie.

I neither want to see history candy-coated nor do I want to see political assassination from a historian.    Having read of Washington's tactical military failures, knowing that he owned more than his share of pride, knowing that he owned slaves.....and, finally, believing that he and his closest advisor, Alexander Hamilton were wrong about the potential for government oppression when federal power triumphs the power of the individual states, I still believe George Washington was a magnificent leader; perhaps the only leader that could have succeeded in nourishing the first few years of a Democratic Republic.

Just recently I read of a rather admirable gesture Washington made to Blacks who both fought in the war as well as some 6,000 Blacks who fled their owners and sought sanctuary with the British.  It seems, during the war, the British tried to foment a slave revolt by promising free passage to Britain if they came over to the side of the Brits.  Once the war was over, the Brits, having lost, saw no need to keep their promise.  Those 6,000 Blacks were left to forage for themselves as the Brits had forsaken them. Washington, knowing these Blacks would some day be returned to their owners, and most likely be severely punished for running away,  called a meeting with the British command and reprimanded them for failing to keep their promise to these Blacks.  He headed a delegation that eventually persuaded the  Brits to honor their promise....this in complete opposition to the slaves' former owners.  Washington himself oversaw the Blacks safe boarding on British ships as they sailed off to freedom.

What Washington did for the 3,000 or so Blacks who served under him in the Revolutionary War took even greater courage.  After the war was over several thousand slave owners came north, intent on reclaiming their "property".  Washington refused to allow them to be returned to slavery and issued a "protective writ" and allowed them to remain in the north as free men.

Perhaps most poignant for this old military vet was Washington's speech to his troops at Newburgh Hall in Newburgh, New York in March 1783.  On the 10th of March a poster was being circulated calling for a military mutiny to force the Continental Congress to pay the troops their back pay.  They felt desperate, unable to support their families, and felt unappreciated by those who were living far better than them.  The poster called for a meeting on how to affect the mutiny.  Washington, in an attempt to head this off, called his own meeting.

While acknowledging that the aggrieved had several valid points, Washington knew a mutiny would be the worst possible solution.  So Washington stepped up to the podium to address the troops.  His first query:  "Are you willing to leave your wives, your children and your property unprotected and defenseless in the face of the British Army?"  "Could they "sully the glory" they had won on the battlefield and act as a mob in demand of their pay?"  Washington then promised to continue his own fight to get them their pay.  He also said to them "Have I not been beside you every step of the way during this long and hard ordeal?  Have my actions not demonstrated my caring and respect for all your efforts?"

Washington then began to read a letter from a Congressman who supported the troops and promised to work as hard as he could to get them their pay.  The letter was written in letters so small Washington had difficulty reading it.  He pulled from his jacket a pair of reading spectacles; the first time his men had seen him wear them.  "Gentlemen, you must pardon me, I have grown gray in your service and now find myself going blind"......

With that simple declarative the troops began to cry, remembering the times Washington used his own dwindling estate to feed them, how he froze with them at Valley Forge, how he rallied them with extreme courage when the battle was going against them, so many times at the front shouting "onward men!".

The mutiny was over.  The flowery speeches by Congressmen on the floor of the Congress had not moved them, nor had their many promises.  One man, one pair of spectacles, and one sentence stopped a mutiny in its tracks.

God, where will we ever find leaders like that again.

Thanks for the great blog today. I too would rather learn the whole history of someones life than just little snippets according to whichever way the political wind is blowing. Nobody is perfect and leaving out parts/aspects of their life that lead to their legacy is a dis-service the their memory.

Thanks for the good words, Craig.

The greatness of Washington will always be sullied by progressive historians. A true leader he was, there are more like him now, but the system does not want rightious leadership. The price will be paid!

yes indeed, anon. And they are using those liberally slanted hate for old white men in our schools....they are becoming "indoctrinated".

True, great leaders cannot get elected in today's America. Unfortunately, it seems the media 'elects them for us'.

Carol, I keep hoping some man or woman, someone with impeccable morals, will rise above all the crap and win the Presidency.

Despite the crap the liberals throw out about Ronald Reagan I remember when America loved Ronald Reagan....they recognized a decency about the man, a goodness that was not about politics at all.

Those "Reagan Democrats" were not a myth...Reagan trounced Mondale on his second run because folks from both parties loved Ronald Reagan.

Sadly, Reagan could not get elected today...there are too many hard edged partisans on both sides of the political spectrum and no one is willing to have an open mind. and vote for a man's character, not just his politics.

As to the media, I kind of think "the great communicator" could have overcome their bias and his message would have reached the American people.

I was too young to care about politics with Reagan but have definitely read about him. I know my mom loved him & still speaks highly of him now.

And, yes, a great communicator shall rise above the media hype and I hope it is soon! My husband said that same exact thing: there will be someone to rise above & get thru! Looking forward to that......