Death On Some Future Evening 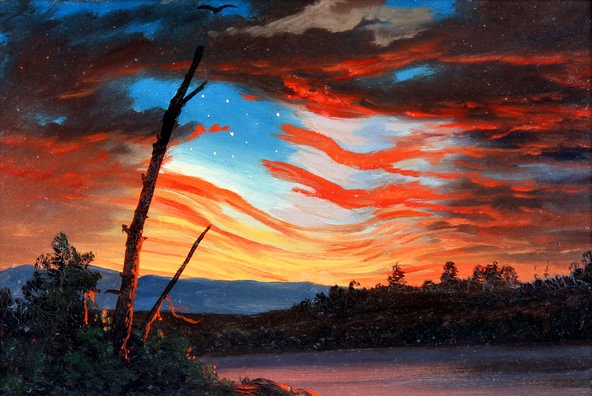 We stood on the steps of the Lincoln Memorial and looked back.  The sky was ablaze with the lights of a thousand campfires and we anguished as one revolutionary light after another was snuffed out like a field of dying stars.  Only a couple of dozen of us left here.  We wondered how many were left elsewhere.

It didn't matter.  There were simply too few of us left...too few who still believed in the words carved on cold stone on the wall behind us..."a government for the people, and by the people" was no longer a creed to live by.  The moonlight bathed old Abe's face and we could almost see a tear running down that ravaged face, for freedom had indeed "perished from the earth".

How well we knew that as we stopped to catch our breath... as we fled from those Socialist Masters hell bent on our destruction.  We had already decided that we would sweep across the Potomac and make our last stand amidst the thousands of graves at Arlington, brothers in arms who had fought for freedom and glory in earlier times.

As we forged the river we again looked back and witnessed the federal forces in hot pursuit.  They wielded iron and steel; a mighty Lucifer's hammer employed to swat the pitiful few of us who refused to submit.

We felt no fear, for we knew this mighty army had not defeated us.  We were beaten by a nation plagued with citizen apathy, a nation that had forgotten all the old well told lessons.  A nation that had failed to learn from the failures of the Greeks and even the mighty Roman Empire that once ruled the world for 500 years.

We were now a nation ruled by socialist dictatorship and massively peopled by 3rd world invading barbarians, our once great wealth spent, our people now sickened by ancient diseases that we had once conquered, our once proud heritage washed down ten thousand gutters on ten thousand streets in ten thousand once thriving American cities.  God!  How many times were the trumpets sounded in warning over a score of years?  How many rallies to awaken the sleepers were quashed by the oppressive iron fist of our Socialist Masters, intolerant of opposing thought.  How many times were the people subjected to the induced coma of the lotus ambrosia of "income inequality", "immigration reform",  "Arab Springs," or "it takes a village-ism" or "MeToo (but not you?)

We mocked our God, outlawed him in every public square, all the while preaching the tolerance of radical left.  We filled the hands of our young with technological wonders and filled their heads with the glory of social liberalism and the need to conform and comply...and the demonization of ambition, productivity, or the profit motive.    No room for science or math or open dialogue, just the secular worship for a government that will take care of them from cradle to grave.

Like that Christmas night so long ago, when Washington and his rag tag men crossed over the Delaware, we now emerge on the far shore of the Potomac and turn south again toward Arlington.  It is there where we will take our last stand.  We hear the roar and rumble, the vast power of the state, getting closer and closer...and we are not afraid.  Our fear and loathing came long ago when we cried out in silent scream as we tried mightily to rouse a sleeping citizenry.  The fear of death for a valiant cause is not death at all.

So riddle us, we pitiful few, with 5.56mm of steel officialdom...drag our bodies to be heaped in some dark and secret place....but know that our spirits will lie here betwixt alabaster rows of those who also once believed in the American Dream....and we shall again be "free."

And so it begins, looking for alternatives is not OK when evil doers only demand surrender.

True anon...and we are farther down that bad road than most realize.

Thanks for stopping by.

I Read Your Blog Everyday And All Of Then Touch You. Thank You For What You do. I Frequenly Forward Your e-Mails
Corky

Thank you much, Corky. I've said it often before...without my reader's comments I would feel like I'm speaking to an empty room. Knowing it means something to someone is very special to me.

There is one other blog I subscribe to and it only gives you the first 2 sentences of the story, along with the title of course! In order to read the rest, you have to click & go to the blog. I think that's a very good idea to get a true count. Otherwise, we get the whole story right in our inbox & no reason to even go to your blog page. Yes, you need a true count because I'm sure you have more readers than you realize!!

Carol, what did your email look like this morning...was my link truncated? Showing only a part of the blog? I can't see what is being sent...let me know if today's blog was truncated as I set it up last night.

It was the full story with the message at the end to click to read the rest. email me & I'll forward it on to you.

Carol..if it's not too much trouble, I just published a new blog...with a truncate mark..can you forward what this one looks like?

Haven't received it yet. Will do it as soon as it's in my mailbox!

The email I got for this post was as Carol said, the full post. I too haven't gotten one for the most recent post; will let you know how it looks when it comes.

I both loved and hated this story at the same time. Loved the telling of it, hated the foretelling in it, and then loved that we shall, in the end, be free.

Thanks for the nice comments, Stephanie. As to the second blog, I can't figure it out. I posted it just as I do all others and they previously went out.

That is very strange! Still nothing in my inbox.

Carol, please let me know if tomorrow's blog doesn't show up in your email. Today's second one didn't show up in my test email either...hopefully it's just a google glitch that will go away today.