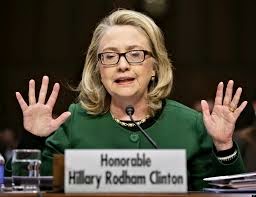 Hillary Clinton's spanking new 200-page, $30 dollar book was released two weeks ago.  When I first saw the title, "Hard Choices", I thought it would be about Bill Clinton's bimbo romp...instead it's about what Hillary "would have done" had she defeated Obama six years ago.

Well, Hillary has been hitting the book promotion trail, with stops on all the major networks as well as a Costco store in northern Virginia.  During all those interviews Hillary has given us real insights into the plight of living in the world of politics.

Hillary says that, back in 2000 she and Bill were $12 million in debt and barely able to scrape together the $2 million dollar down payments on two mansions while funding daughter Chelsea's college tuition.  Most of that $12 million of debt was to settle lawsuits with Clinton bimbo's  Paula and Jennifer and to pay his law team who managed to keep him out of prison for lying to a federal grand jury.

Hillary praised Bill for working very hard on his speaking tour.  She said Bill talked himself hoarse while making $200,000 dollars per speech he gave for the next four years.  Thankfully Bill was able to rope in $100 million dollars in those four years....after all there was a lot to talk about; how he single handedly reformed welfare, created the internet boom, supervised Al Gore while he was inventing the internet.  Bill also explained away Monica Lewinski and Mogadishu and why he didn't attack that Osama Bin Laden terrorist camp.

Hillary was busy herself; she did several interviews explaining why they made off with the White House silver and how she parlayed $1,000 dollars into $100,000 investing in cattle futures and how she found the travel gate documents in her parlor two years after Congress subpoenaed them.

Tireless, Hillary wrote a book about village child raising and how she dealt with spousal infidelity and insisted that she could bake cookies with the best of them...if she wanted to.

But what has kept Hillary on the front pages these days has been her interviews on the book tour.  She distanced herself from Barack Obama by saying Egypt, Libya, Syria, Iraq, Behghazi and the Afghanistan mess would not have happened had she been President.  She even criticized Barack for that whispering promise to Putin that if would hold off on the Ukraine invasion until after the 2012 election he'd give him free rein to invade Eastern Europe any time he wished.

Yes, there were some rough patches; NPR attacked her for not being honest about her previous opposition to gay marriage.  Dianne Sawyer asked her how the American people should think about her plea of poverty while buying two mansions and how Hillary's gripe about income inequality squares with Bill and Hillary's tax exempt fortune of $150 million dollars.  And while Hillary tried mightily to stick to that anti-muslim video being the cause for the Benghazi attack, recent revelations pretty much dispute that theory.

Ah...the privilege of being out of office, free of blame, and erasing all those failures with a political etch and sketch!  Per Hillary, the Arab Spring would have been successful, she would have neutered Putin, gas prices would be a buck a gallon, Hillarycare would give everyone healthcare for nothing and every American would have a chicken in every pot and a BMW in every driveway.

Hillary is looking more and more like Charles Durning, that fictional side-stepping governor in "The Best Little Whorehouse in Texas."  https://www.youtube.com/watch?v=qRdr_jp-d9c

All I see whenever I see a picture of Hillary is an evil vindictive bad person.

Craig, she's on my top ten "wanna punch in the mouth" list.

Is it my imagination, or is she starting to look more and more like a 'three-bagger' with each passing day?

anon, maybe some of that inside ugly is starting to ooze out...people get a good look at the real Hillary and they'd run.