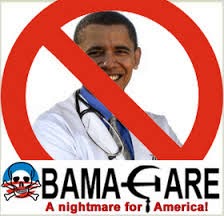 I've written unendingly about the inefficiencies of Obamacare.  And we've all read nightmare stories about the impact this has had on people who've needed care and had the system fail them.  To now, for most of us, the Obamacare fiasco has just been an ugly abstract thing.  That changed for me, and I hope for you, as of yesterday.

One of our blog "regulars" emailed me yesterday.  He's a recently retired Boeing engineer up in Washington state.  He's one of the good guys, hard working with a deep love for his family.   Sadly, I learned that his wife has cancer.  She's been undergoing weekly chemotherapy, taking a drug called Velcade which seems to be effective in beating back the cancer.

Two weeks ago Greg took his wife in for chemotherapy only to be told by the hospital that they could no longer treat his wife.  Seems the Washington state health exchange doesn't have him in their system, even as they have been accepting his health premium payments for several months.

That weekly Velcade chemo treatment costs more than $5,000 dollars a pop.  Obviously, Greg can't afford that.  Few could.  So his wife is at home and quickly fading.  Greg has been spending every waking moment writing and calling anyone that might help.    He's bugged the Washington health exchange enough to have earned two "reconciliation tickets" but the bureaucracy is grinding exceedingly slow at a time when immediacy is critical if his wife is to survive.

As I understand it, the problem seems to have developed as Greg transitioned from his employer paid health program to the state exchange.  And ironically, the Washington healthcare exchange seems to have evolved into their own particular "death panel" as no human being in that system seems willing to intervene, recognize that Greg signed up and is actively paying his health care premiums, yet his wife is being denied that critical chemotherapy that will save her life.

Folks, we all know that we are too small and powerless to do anything to fix this tragedy.  Perhaps we CAN do something come next November.  But for now, you might send prayers or positive vibes Greg's way.

Greg reads this blog every day so if you choose to make comments, please be kind.  Let's all hope and pray for the best.

So sorry for the experience that Greg is going through and even sorrier for his wife. Chemo, (I still can't call it "therapy") is a dreadful experience at best. I think we all know horror stories with cancer.
The one I remember vividly was during my own experience with this mustard gas derivative. This was pre-Obamacare several years ago. The process, as you said, is very expensive (the result of investors wanting their money back and, of course, I can't blame them). I was "lucky" because I had the Cadillac
of Insurance Plans that paid 99% of the expense. The story I remember is pretty common: it involved a strong big, burly guy who worked years and years for a lumber mill. Then he too got cancer and was proscribed "12 chemos". After only four sessions he became too sick to work and by the 5th sessions lost his job and his benefits. Two more sessions and his credit was maxed out. He was sitting next to me on the 8th session when, mid stream, the nurse pulled the needle from his arm and said, through tears, that "there was a problem with billing". I don't know the rest of the story but the fact that it was a story at all is horrible.
Our medical system was horrible broken and it is not fixed now.
It is still broken.
I am more interested in fixing the problem than a negative campaign of repealing Obamacare. It didn't work before and doesn't work now.
Is it even possible to make better? I find it appalling that people will happily sign up for Medicare or accept medical attention from the VA (both forms of Socialized Medicine) and are opposed to extending this circle.
I just don't like the "I got mine" attitude! and I did have mine!
I would prefer a better system for everyone, one that would reduce the fear of bankruptcy and losing everything from being ill.
An extreme solution would be to make all forms of insurance and socialized medicine illegal. No private insurance, no medicare, no VA benefits, no worker's composition, just all cash for services. That would ring the cost of medicine down dramatically. But we might not have the services we want or are used to. The "bottom line" is it is a business. Just as our grocery stores rely on food stamp customers for 40% of their business (thus reducing the price for everyone!), our medical system relies on welfare and socialized medicine for over 40% of their business. Stop the government checks sound great, but it would put the hospitals out of business overnight.
Clearly, I do not know "the answer" but I want a compassionate and reasonable business solution to the problem. I am so sorry that Gregs wife has to suffer the consequence of a failed system. I really wish that our members of Congress had no gift of insurance. It is not their "right" any more than it is anyone elses. Certainly, it is not an "earned benefit". They would actually have to do some work for that to be considered.
So Greg, a hard working American from theoretically the richest country in the world, has to go scrounging in this moment of real need. Probably the first time in has life he has ever needed anything after a lifetime of paying taxes and helping others.
My thought is that if we don't help him...who will help us?

Jerry, I guess, until you actually read an enlistment contract from the 60's and 70's you'll never stop calling VA a government handout.

As to Medicare (as opposed to Medicaid), well I guess you never looked at your pay stub during all those years of work.

This is about all I'll say about this...I don't trust myself to say more on a day I don't wish to be upset.

This is not the 1st 'horror' story I've heard about getting lost in the system. Most recently, a woman in her 80's had just lost her husband to cancer because of a similar insurance issue.
My parents are now in their 70's & we talk about these issues & to say the least, I'm highly concerned!!
Myself, I've vowed to become healthier on my own to prepare for my 'golden years'. Some interesting info I can share:

I'm so very sorry to hear about your friend! Please know they are in my prayers.

Thanks for the links, Carol..I'll check them out. As for Obamacare, I just want the government out of the healthcare business as much as possible.

The VA mess, the massive Medicare and Medicaid fraud is proof enough that big gov. can't manage a damn thing.

The Repubs want to give out vouchers and let people make their own doctor and health decisions but liberals just won't let go and let that happen.

Have a good day.

Agreed! We don't need gov't in every aspect of our lives. I think there's a word for that.......yeah, well, I know you get my drift!