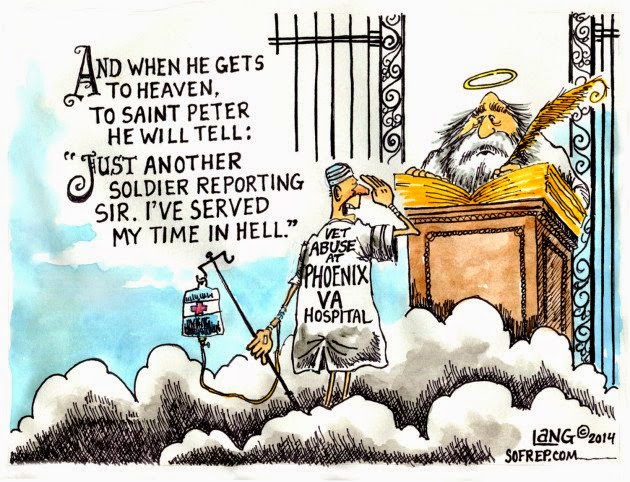 This week the Republican controlled House passed a bill that would have reformed the VA Health care system, allowed vets to go to doctors outside their system if their treatment was delayed, increased audits of hospital performance and give the VA Chief the power to fire anyone who has been found abusing our vets.

The Democratically controlled Senate killed the House Bill immediately.  Led by the only Socialist-Communist in the U.S. Congress, Senator Bernie Sanders from Vermont, the Harry Reid Senate had one problem with the House's bill.  Can anyone guess what that was?

Yep....the Senate Democrats would simply not allow the VA unionized health care workers to be reprimanded for fired for abusing our vets.  So, the VA worker in Phoenix who left that vet out on an outside patio for eight hours on a 120 degree day...and found him face down on the hot cement with 2nd degree burns will suffer no consequences.  Nor will the security bully who ejected a vet so desperate for help he chained himself to a chair in the waiting room.  And no discipline for those medical schedulers who kept secret waiting lists in order to secure bonuses for timely scheduling.

Nope...Old Bernie and Harry and Nasty ain't gonna have no one picking on their union voters, no matter how ghastly their actions.  Oh, the Dems did say they'd be willing to pour more billions into the program....all the more to enrich those union thugs.  And they did agree to allow the VA Chief to discipline or fire the non-union administrators...but not not unionized thugdom.

So, Senator "Juan" McCain has promised to sit down with old Bernie and iron out a compromise.  Well, we learned what that was; the Senate gets to keep shielding the unions from being fired, and Senator "Juan" McCain, the Senator from Arizona where vets were abused....and did nothing about it, is happy...and Bernie is happy...and the unions are happy, and the Dems are happy...but God help our veterans cause this abuse is systematic, has lasted for decades, and the abuse and negligence will go on.

I wonder whether there is more to this story? Simply about unions?
What union do the schedulers, medical workers and doctors for the VA belong to? You are right, it is sad when unions protect incompetence, fraud and criminal behavior. I prefer the "Chinese Solution" to such issues.
However, it seems brazen and foolish for the Senate Democrats to stall needed improvements to Veterans health care, especially when it is so clearly in the news, over a union's right to maintain incompetent employees. I suspect there is more to this story?
How nice life would be if there were no secret agendas and hidden motives!

Jerry, in your subtle efforts to defend some of your favorite liberal factions, you often politely ask me to "dance". Well, I'm not going to write a history of union thuggery here.

And I'm not going to write whole paragraphs about how teachers unions have thwarted education reform or the role the AFL-CIO played in driving up runaway inflation in the 70's, or how runaway union wages destroyed Detroit.

And, no, there's nothing else in this story...read the two versions of the bills for yourself...you'll find the only difference is the protection of the rank and file union thugs who were on the front line of this abuse.

Sometimes a turd is just a turd.