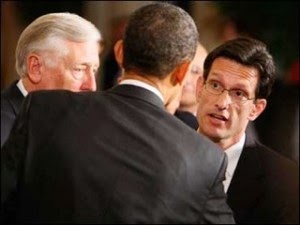 Debbie "Wasserman Test" Schultz and the liberal left love to giggle over the Tea Party.  Well, yesterday some folks down in Virginia just sent a powerful message to RINO apologists like Eric Cantor...they elected a Tea Party candidate who has pledged to fight like hell against amnesty for illegals and a little budget discipline.  And if you don't think defeating the House Majority Leader ain't a big deal, you're dreaming.

Back in January Congressman Cantor hosted a plush little get together to plot Republican strategy for 2014 and beyond.  He said we need to put these Tea Party folks in their place...and we need to work with the President to pass immigration reform.  So he and House Speaker John Boehner held all kinds of closed door meetings and were working hard to pass a pathway to citizenship for 30 million illegal invaders.

Well, at least a small pocket of American voters yesterday said they don't think that's such a great idea...that we need to care about American jobs and American borders.  That we need to put a stop to home invasions and anchor babies and wage suppression and welfare for illegal aliens and explosive Hispanic crime.

No matter what happens in the next few months, no matter how many Tea Party candidates win or lose, you can drive a nail in the coffin of immigration reform this year.  Those RINO congressmen, including Paul Ryan and John Boehner, have gotten a strong message.  Pass amnesty at your own peril.

So who defeated the establishment?  A humble economics professor who can  add two and two and knows where are borders are located.  Cantor spent more than $5 million dollars while Dave Brat spent $122,000.  He had nothing going for him except the truth and "the right."

As you know, I've written often that I believe the Tea Party is simply the front line troops, the small rag tag army that fights hardest for America, just as that first Tea Party did 250 years ago and just as Washington's rag tag army defeated the mightiest army on earth!

I hope Dave Brat goes to Washington and acts like a "brat."  I hope he throws a tantrum along with the other 86 Tea Party members of Congress every time Obama asks for a trillion dollars in deficit spending and every time Harry Reid calls for amnesty for those invaders who are destroying us.

Anon 1....when you throw out a comment the equivalent of a banner, without a smidgeon of "protein" it is meaningless.

Anon 2...no, we Republicans don't whine after defeat and run to the courts and moan over hanging chads. And, oh, by the way..not more snot nose one liner and you're "SPAM'

Good morning! It is a grand day when elections can be won and the revolution can occur as it should:
without firing a shot! and California? what's going on? maybe there is a chance for education after all. Teacher tenure on the ropes might improve education? Another battle won and no shots fired! Happy days!

Good morning, Jerry. Yes indeed, we both want revolution through the ballot box and not in the streets.

As to the teacher tenure issue, pardon me for not holding out much hope for a win there...the ultra liberal 9th Circuit Court of Appeals will no doubt knock this back down.

Back to Cantor....the RINOs are meeting right now behind close doors to come up with a spanking new election strategy.....so far not a peep from any of them.

Finally, I believe those 7th District voters over there in Richmond, Virginia just saw all those 90,000 "junior invaders" coming across the border and had simply had enough.

That first anon gives us anonymi a bad name!

Have to say my heart and mind did a little happy dance when I heard that a Tea Party candidate knocked out that RINO, Cantor. I am thankful to the wise people of Virginia for having the courage to vote their conscience instead of their party as too many Republicans have done for a long time. Here's hoping this is just the opening volley to a change in direction for our country.

Yep, if we oust enough RINOs and bring in enough patriots we might even get enough politicians with the guts to impeach this outlaw who chooses which laws he'll enforce and those he won't...