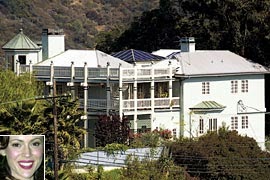 I see Alyssa Milano crying every night on TV.  Her tears run down her face as she bemoans the terrible plight of 3rd World children.   She's the United Nations Rep for that body's United Children's Fund.    I listen to Alyssa's plea and I can only seem to remember her appearance on Entertainment Tonight as she walked us through a multi-million dollar renovation of her Bell Canyon palace.  She also beamed with pride about her second home, her country estate.

I'm sure Ms. Milano must be a very nice person.  But she doesn't move me one iota toward sending anything to UNICEF.  First of all, the United Nations already gets far too much of our money already.  Secondly, I always go to Charity Watch to see how much of our charity donations are eaten up by administrative costs...but most of all, I don't donate because Ms. Milano and her Hollywood friends could donate millions and never feel it; yet they shill hard working Americans to donate money badly needed for themselves.  They do it by manipulating the emotions of people and they manage to do it without ever associating the charity spokesman with the obscene wealth they possess.

George Clooney will hop his private jet and fly La La land and hold a telethon to warn against global warming.  Leonardo DiCaprio will drive his Lexus to the Academy Awards, then back to the airport and climb into his personal jet to attend a telethon promoting green energy.

There a good dozen Hollywood elites who appear every night on my TV screen.  And they are marvelous actors; they can shed tears at the drop of a hat and, if you're not careful, your bawling right along with them, and opening up the old checkbook for all those worthy causes.

Just once I'd like to see George Clooney shown walking out on his veranda overlooking Lake Como in Italy and shilling for African children.   Or Leonardo at the controls of his private jet as he urges you to conserve fossil fuels....or even Alyssa sitting pool side in Bell Canyon and beseeching you to send your money to aid poverty stricken children.

Nope, if any of these charities hope to get a cent from me, they'd better trot out a blue collar Joe who is just getting by and believes in the cause enough to chip in a few bucks himself.
Posted by A Modest Scribler at 2:00 AM

I think I feel the same way towards Religion propagandized and sold on Television. Somehow the Multimillion mega Churches don't seem right. But that doesn't mean God is wrong or doesn't exist. Sometimes when we kill the messenger it is easy to lose sight of the cause. The sex slave advocate (against) is on the news, criticizing of her lifestyle and rehearsed message of the evils of that trade. Another example of some right with every wrong and maybe some wrong with every right.
It is a schizophrenic world for sure.
That said, I seldom give to any organization, especially one with a 95% administrative cost (like the government! LOL!) but that doesn't mean I am not sympathetic with the cause. I can't save the world. I find myself more giving to particular people, individuals
struggling and trying very hard to get to that next rung in the ladder. Some very wealthy people do try to accomplish good things with their wealth but I wonder to what end? They got wealthy in the first place by paying low wages, exporting the labor to China and fostering horrible working conditions. Maybe its guilt?

Jerry, agree on the megachurches, with the exception of Joel Osteen whose positive almost secular message I love.

Re, sex slave advocate...and vice: I see the local police busting a massage parlor and think what a waste of resources that might go to serve and protect. If there was one adult in the room the law would go after human trafficking and free businesswomen and sex workers to ply their trade freely, willingly and at the profit point they want to set.

i donate to dogs and kids and make a few small exceptions when i'm convinced the need is there. As to the motive to do good by the wealthy....well, Jerry, my friend, we part ways..while there is some large truths to what you say you're painting with far too large a brush. Have a good weekend.

Joel Osteen is no different than Creflo Dollar or Peter Popoff, only that Joel has a natural "smile" and is much more subtle in his pandering.

Religious is a belief, Religion is a business.

Why is it that conservative types only associate value with cash?

Milano may not donate any monetary funds but isn't someones time and energy worth anything? I believe she can generate more revenue with being a spokesperson then just writing a personal check. If you honestly believe one's time and effort as something being worthless then that would make your blog worthless also.

I personally don't have much money being disabled, but I do donate my time and efforts to homeless veterans and the needs of those less fortunate, yet with your logic my contribution would hold less value since I don't donate cash. The reality is that most of the wealthy donate cash for tax reasons and not a true interest in what it goes towards.

If your concerns are based on how donations are distributed in any organization, you should be enlightened to know when the collection plate goes around on Sunday that the one's spreading the word deposit more in their bank accounts than what they deposit in the accounts of those whose message is relayed.

You should re-evaluate your perspective of value and charity.

Anon, I would guess that if I wrote 500 pages on this someone could come along and find a hole in there somewhere. You found a tiny hole and drove a truck through it by assuming that, since I only mentioned money in this one blog, then that was my only charity concern.

I have written time and again of true charities heroes...those who can only afford to donate their time, and do so in a big way.

And of course you're perfectly right; Milano and Clooney et al can suck up charity funds far better than you or I...they are actors after all. And while it is presumptuous on my part to say this, if I owned 50 million in real estate and all the luxurious trimmings, I'd have far too much pride to go out and shill for Joe Blue collar to cough it up while I hoard my wealth is great gobs.

If one of these star shills want to really impress me, let them give in the same percentage of income that I do...now that would impress the hell out of me.

I don't donate to organized religion, though if I found a church that gave me solace and comfort I wouldn't have a problem giving to it.

Thanks for offering your opinion.

"And while it is presumptuous on my part to say this, if I owned 50 million in real estate and all the luxurious trimmings, I'd have far too much pride to go out and shill for Joe Blue collar to cough it up while I hoard my wealth is great gobs."

So you have no problem in becoming what it is you despise.
Typical

anon, the reason we don't have too many regular liberal readers is because they are just so fucking stupid.

That's okay little one...we understand you were born without the logic gene...else how could you write something so blindingly stupid.

To use your own worn out cliche.."typical".