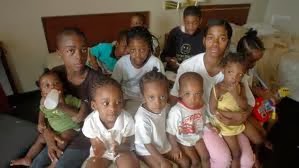 The local media are busy generating as many "government shutdown" human interest stories as they can these days.  From lake closures to piss off the fishing crowd to couples having to cancel their Grand Canyon wedding plans, the level of heartbreak is played out over two hours of local and national news venues.

Perhaps the most heartbreaking was a welfare queen who was interviewed this morning on a local Phoenix channel.  Pregnant with her seventh child, no father at home, she was bemoaning the delays in her WIC payments.  As both diapered and undiapered toddlers flitted about her, she cried giant crocodile tears as she cursed the nasty Republicans who have shut her off from her $232 per child weekly stipend to support six and one half children whose various fathers have refuse to do.

I kind of wonder why she didn't save some of that $15,000 dollars she got in Child Tax Credits last April.  Couldn't she have put away just a little of that IRS granted largesse to see her through this bump in the road?

The interviewer, a product of the liberal main stream media, failed to ask the welfare queenie if she had ever considered closing her legs for a year or two, thus giving the taxpayer a year or two to take a breath from the burden of financing her sex life.  This Phoenix mother sounded so much like that Florida welfare queen with 15 kids who recently went on U Tube to declare the taxpayer owed her the support for the 15 future urban thugs who will themselves breed a generation of ethnic tit-suckers.

Perhaps our local welfare queen could use her free Obama phone, call the White House and commisserate with "the annointed one".  As a minimum he could offer succor and sympathy and claim one of her boy childs as his own...if he had a son.

Failing that, the woman still has her welfare check coming in; those payments have not been affected.  Obama tried withholding the pay of our military to make sure there was enough to fund his 97% loyal voting block (115% in Philadelphia and Cleveland and Baltimore and Chicago and Detroit).

Have I no heart at all?  Yes, I do.  I feel bad for those Americans going out and working as many as two jobs, laboring 40 or 50 hours per week just to feed their family, only to come home and not being able to go out and fish at a federal lake, or camp at a national park, or get his national guard pay.

As to the welfare queen?  Sorry...you have so many productive streams from the government tit that you'll never go thirsty or hungry...unless of course your swapping your food stamps for drugs or booze.

The other part of govt still working is the part that takes the working peoples money and gives it to these welfare 'hos. The constant liberal lying is inexcusable and pisses me off.Have a good weekend.

Ronald Reagan once said, " We should measure welfare's success by how many people leave it, not by how many are added." Clearly Mr. Reagan would be disappointed with the current state of welfare in this country.

Brian, Ronald Reagan is spinning in his grave these days.

Excellent post. I was asking a friend on Friday if she heard how many EBT cards had been suspended due to do the shut down, sarcastically of course.

Thanks, Rebecca....no, Obama made certain that all of the the programs that support his voting block are up and running. The WIC payments were not stopped; they were simply delayed a few days as program managers reorganized to deal with the furloughs.

Most of the pain is going to the taxpaying citizens of this country. The sick lame and lazy could not stand not being coddled for even a day...and Obama knows it.

Stand by for a wonderful story of some good folks right here in our county who told the feds to keep their pork!

Okay, I'll be waiting! I'm lazing about today, tired, long week. Surfing and watching the Lawrence Welk show. I LOVED this when I was a very small girl in the seventies. I even went to the concert once with my grandmother. The music, the singing, the dresses, the dancing, the bubbles!! Unlike today, these singers can actually sing too.

Rebecca, I used to watch the Lawrence Welk show with my grandparents along with Hee-Haw some truly great memories there. Thanks for mentioning this, it brings me back to better times.:)

I just remember LW: I was not even 5. My gram loved this and I loved it with her. Was there a lady who sang in Spanish or am I mistaken?

Watching it now: I think it was probably the clothes that attracted me the most. Those dresses are fantastic by any standard. :-) Secondly, I still love anything with string instruments - violins I mean.

Very informative resources provided here although I enjoyed reading the welfare queen's lament!! It's good to learn government act upon welfare progress. I hope Obama will be managed to make a good sign of great local welfare queen. Thanks.
lots of americans are on welfare