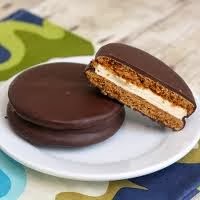 When I was a kid I could go into any grocery store in my hometown, plunk down a nickel and walk out with the greatest treat in the whole history of kid-ville.  It was a huge Moon Pie made up of graham crackers and marshmallow and chocolate.  The Moon Pie of my youth was a good 7 inches in diameter, two inches thick and required two hands to handle it until you had gnawed down half of it.  It had two half inch layers of graham crackers which sandwiched a good inch of marshmallow, then smothered in a rich chocolate topping.

We loved Moon Pies in California but it was an object of worship in the South.   "Moon Pie and RC coca cola" was a refrain shouted out a million times a day south of the Mason Dixon line.  Soon retailers picked up on the common refrain and began marketing RC Cola and a Moon Pie, calling it the "working man's lunch" and pricing both items as a ten cent package deal.  Field laborers and miners and millions of children gobbled up millions of them every day. 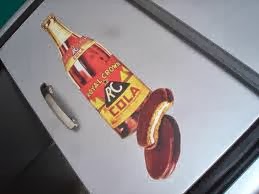 Strangely, the Moon Pie was invented just about the time the formula for making marshmallow emerged.  Moon Pies are still made by a bakery down in Chattanooga, Tennessee but they are now but a pale shadow of the original Moon Pie.  Today you'll find the Moon Pie to be a little four inch disk, at least 50% smaller than the original.  While a 7-11 or Circle K will have them on the shelf at $1.00 each they are commonly packaged a dozen to the box and not as widely available as they once were.

How did they manage to dumb down such a marvelous bargain treat?  Well, I did a little research to find out why Moon Pies are sold as much as 20 times more than that original price of a nickel.  And I found out what the Moon Pie folks say is the reason for the downsizing.

It seems that, around 1980, the company began getting letters from libtard mothers (yeah the first crop of the "nanny staters" began to emerge about that time).  It seems the libtard moms were complaining that, after giving little Tammy or Timmy one of those big Moon Pies as an after school treat, they couldn't get him to eat his broccoli and brown rice at dinner time!  The libtards accused the Moon Pie company of poisoning their children with a sugary treat and demanded that they make Moon Pies smaller.  Unable to figure out that they could have cut the Moon Pie in half, the libtards, much as they harass MacDonalds today, promised swift boycotts if they didn't downsize these monstrosities.

So now the libtard moms are happy because they are relieved of the responsibility of exerting portion control for little Tammy and Timmy.  The Moon Pie company is happy because they harvest huge profits in selling, taking into account inflation, a treat that should cost no more than a quarter, for a buck a piece.

The only ones not happy are the old farts like me who remember five cent cokes, five cent Hershey bars, ten cent coffee, ten cent newspapers, ten cent comic books....and a wonderfully delicious monstrous Moon Pie that helped me fend off broccoli and brown rice for a good part of my life.

I will bet that one of the libtard moms was none other than puss bucket pelosi.

No doubt, Craig...and I'll bet she was pushing broccoli and brown rice before anyone else!

Brian Kalifornia
That's where your both wrong and I hate to say that. She was letting her own children do as they wish, and eat what they wanted. She only pushed her will onto everyone else's kids, telling other parents how to raise their kids and what to feed them. Puss Bucket is a perfect name for her.

The National Association of Puss Buckets resents to use of their good name as an adjective to Nazi Pollution.

I Don't blame them!