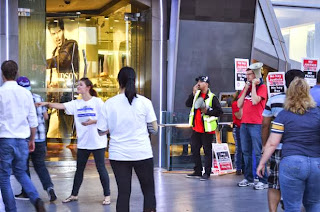 The above video link is to a Culinary Workers of America Union protest outside the Cosmopolitan Hotel in Las Vegas.   Now there's nothing unusual about unions protesting outside their place of employment.  They do it all the time..and sometimes it is pretty nasty.  But I have never seen the level of hatred and the horrible invectives shouted at Cosmo customers as they entered the hotel.

These particular protesters were the union bosses themselves, and they called people names, shouted "beached whale" to overweight customers, insulted guy's wives, etc.  And it was hard to ignore because they were all using those portable loud speakers.

Now folks, it wasn't the protester's invective that got me...it was the people walking in, listening to those union thugs personally insulting them, and not one person went over and bitched slapped those throwing out the ugliest of insults.  Has the new generations of Americans just become cowardly automatons?  Because I can tell you this; I'm 65 years old but I would have been in their punching the guy out who was personally insulting me and my family.  Is my generation the last one that refuses to eat all the shit being thrown out today?

Is that why illegal Mexicans get away with marching through our cities, carry Mexican flags and demanding citizenship?  Thirty years ago these invaders would have been beat up or arrested and hauled off to Mexico?

Is that why 67% of you opposed Obamacare and yet you sat on your ass, didn't write your Congress, as your ready yourselves to pay out a third of your annual income to pay for mandated Obamacare?

Is that why crime is so damn high?  How many of you have written your local county attorney and protested light sentences for felony crime?  I have!

When I saw those folks walking into the hotel I was sincerely hoping that most of them were tourists from California...since I know folks in that state laid down, spread their legs and made themselves ready for the grand liberal fuck long ago.  I kept waiting for someone from Missouri or Oklahoma, or Montana or Texas to show up because I just know those die hard Americans would be out there kicking union ass...no way would they accept such a breach in good behavior!

Yep, watching that video just scared the hell out of me.  My hopes for a 21st century revolution, a 2nd Civil War that takes back the America I grew up in, grew quite dim after watching these cowards take the insults without retaliating.  What kind of pride did they have after they walked through those doors after being verbally accosted so violently, and doing nothing about it?

Please let those cowardly automatons absorbing that invective without response be those Kalifornians we've seen alot of in recent years.  Please don't say all of America is like that.  My heart would break if that was so.
Posted by A Modest Scribler at 2:00 AM

I am a Californian and I do not stand by as someone insults my family.That being said, the way laws are currently enforced instigators(union bosses above) get off freely when you defend your family or yourself.The guy with the bullhorn would have been passing very loud wind with it shoved up his liberal ass.

Craig, I would knock him on his ass and take my chances in court. I've learned to mellow out quite a bit in my old age but I would never take the shit that guy was dishing out...there were other videos, longer and worse than the link I provided.

As to Kalifornia...you know I'm talking about the majority of that state...I have many good reader friends from Kalifornia who are not a bit submissive.

But any state that allows them to be raped as KALI has proves there are too many pussies in that state.

Just to mention my experience and the reaction we got from those in power. During the Iranian debacle during the Carter administration I was framing apartment houses in Washington state. Iranian students at University of Washington there on student visas were protesting against the USA on the campus being very loud and abusive of all things American. Our foreman told us if we wanted to we could have the afternoon off to go vent our feelings to the Iranians. We all loaded up in our pick ups and headed to Seattle. There was at least twenty of us and we were loud. You already know the outcome. None of us were arrested but we were hit and put in the back of cop cars. We were the enemy of course. Apparently the aliens here on visa, who's education is being paid for by us enjoy a more complete freedom to speak than do we American's speaking for our country. That was then when conservatives had much bigger balls.

A more recent event was the Cinco de Mayo parade in San Francisco a couple years ago. La Raza was well populated along with all the bleeding hearts in SF. The Tea Party was sadly very poorly supported. They didn't put out much of a message in advance though. The illegals were all spitting on and trampling the American flag while shouting for their rights, etc, etc. As the march went on they came by the small roped pen the Tea Party was forced to stand in by SF police the shouts became much more hostile, the volume increased and gestures, threats, and violent behavior in general all became quite frightening not one cop responded in defense of the Tea Party folks, some fearing for their lives, as I was told. Many of the cops were mexicans and happily fueling the flame. This show can be seen on you tube of course. I wasn't there, of course it would be easy to say I would have reacted by knocking mexicans on their ass. It's easy to play with the bravery of being out of range. I do know that unless we are on the side of the liberal democrat we are hopelessly outnumbered and I do know from experience, you will never find a republican protester with any balls when shit hits the fan, and all you will be taking home is a shit pile of bruises. They all talk a big game, but I'm telling you when it's time, no walkin that talk. The civil war you talk of, I hope I'm near you because the conservatives I've seen around here have all given up or are to afraid of losing what little property they have left.

Ken, you made my point brilliantly! Maybe the fact that only one percent now serve in the military...and that does toughen you up...maybe it's because there's no more recess in school...maybe it's because most men these days are feminine metro sexuals...I don't know...but if i saw a Mexican walking on my flag I would deck him..might get beat up, might get arrested, but I'd get the first lick in.

And when that 2nd Civil War starts I probably won't be around but if I am you're welcome to join my company. Mole Labe

The ever controversial Ann Coulter had, I think, the most complete answer for what the root cause of our troubles is. She contends that it all started when they gave women the right to vote. I started backtracking most liberal legislation and well, she has a point!!

Ken, my good buddy, my staunch conservative centurian from from the liberal paradise of Kalifornia...I'm not touching that one with a ten foot pole! I've got hundreds of conservative women as followers on my tweeter account with thousands more still out there.

Further, if we have women that are smart enough to argue against foolish overseas wars, and women who run a balanced family budget (and could run a federal one too), I'll give them the benefit of the doubt...

I fear it is far more likely that our school system and our liberal female contingent has bred a whole new army of male metrosexuals who have proven to be as feminine as their women...and god know, we got to have some testesterone somewhere in the mix.

And I reiterate, now that only 1 percent of America chooses to serve in our military there no longer exists an arena to toughen people up so they won't voluntarily..and silently eat shit that is thrown at them.

A lot of crummy reasons for this stem from years of liberal legislation. People born in this country (specifically if you're white) do not have freedoms anymore. A felony record is pretty much a death sentence in disguise, no one is ever going to hire you and if you hit someone for throwing slurs and insults at you or your family, you're seen as the bad guys

Ken has it right, these students on visas have more rights than American citizens do, its sickening. You could call it being cowardly, I would see it as having to toe the line as doing one wrong act (even in self defense) will find you broke, jobless, shunned by communities, businesses and employers.

Take my state for instance, if someone breaks into my house/car or attempts to take my property, I have to let them steal and perform any act of violence they may want. I can be convicted for defending myself, it's unreal. I've resorted to non-violent methods (paint grenades, adhesives, etc.) but I still keep my bow and knife close.