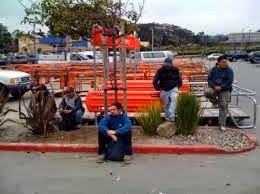 I drove over to my local Home Depot this morning as soon as it opened at 6AM.  Had to pick up a part to fix one of my toilets.  A sure sign that the real estate industry is again thriving was the appearance of a contractor truck pulling up in front of a crowd of illegal Mexicans who hang around Home Depot looking for work.

I heard the contractor yell out "eight workers, ten dollars per hour, six hours guaranteed".  As the Mexicans tried to all jump into the back of the truck, the contractor said something to each one, then culled the crowd for his eight workers, loaded them on, then drove off.

One part of Arizona SB 1070 made this method of hiring illegals against the law.  Then the liberal 9th Circuit Court of Appeals in San Francisco nullified this, as well as other features of the law.  That makes it easy for contractors to once again hire illegals, pay them in cash, avoid paying benefits, and most tragic, suppress the wage scale of fully trained and eligible American construction workers.

I can recall a couple of decades ago when an entry level electrician could command a salary of $25 dollars per hour.  That level of salary enabled a worker to feed and clothe and house his family and live a life of dignity.  He took pride in his work and the ultimate owner of that home being wired could rest assured that the job was done right and he wouldn't be awakened at two o'clock in the morning with his house ablaze due to improper wiring.

I then went into Home Depot to get my part and saw a line at the contractors desk.  Hard working Americans were scouring bills of lading and materials lists for costs; trying mightily to drive a small profit from a small home repair or remodeling job.  Our skilled workers have all evolved into small businessmen as they try to make a living, as they have been crowded out of the large projects by millions of illegal Mexicans.

I then thought about how much worse will it be when Obama grants amnesty and green cards to 30 million more illegals.  How low can you suppress wages until you starve out every American still willing to work?

In this long history of American labor abuse I did find one moment of satisfaction.  A few months ago I was reading the news and was amused to see that a housing contractor had hired crews of illegals to wire his houses under construction.  It seems everything was going smoothly and his illegal crews had wired dozens of homes under construction....until one morning he showed up at the work site, sans crews.  It seems that the contractor's cheap labor had come in the middle of the night and stripped every foot of copper they had so laboriously installed in the previous weeks.  The Mexicans knew exactly where to go, what to take, and how much they could get for a very large crop of spanking new copper! None of the culprits were caught, most likely safely back in Mexico, and flush with money.

As I read that crime report I was just wondering how jolly that contractor was when he next pulled into a Home Depot to pick up a load of "skilled labor".

I watched a video a few years ago with a contractor picking up laborers then hitting the speed bumps at about 10mph, then heading to the local immigration office,should have seen them run.Ever tried Lowe's? Better home owner selection,less illegals, around here anyway. Have a great weekend.

Craig, I saw the video you mentioned...it was pretty funny. These days they don't worry about that anymore...Obama will save them.

This is one place that labor unions could make a huge positive contribution to the workers in this country. Why aren't their thugs taking on these scabs?

Anon, I'm baffled about that myself...can't understand why the Labor Unions would support amnesty since it will surely drive wages down even further...I remember that they once were so I don't know if they cut a deal with Obama on something or what.

40 years in the trades , and train so many illegals only to lose the job because 0f the recessions , the word is just as it sounds RE SET Tion, Every 8 to 10 years they put us into a recession to let go higher paid empolyees and lower over head to stay competitive and out source work to 3nd world nations. everytime this happens I have to learn how to live on less money and pay more for food gas housing higher TAXS .This has been going on for more than 30 years , The customers didn't know this was happening , now the Illegals wants higher pay . OK I used to make 17$ an hour in 1993 . now 2 recession later I cant make a living in the trade , Because of low paying employers . unable to speak with co workers , they don't speak English. I fell like Iam force out of the trade that I worked for so long, in the end what will happen is the next waive of Illegals . will be here soon and the same illegals here now will lose there jobs . to the new illegals. Oh how the will cry to close the border. For 30 years I have wonder why one would pay $1500to $5000 to be smuggle in to the USA got my answer when I look at mexico Education web site only to find that if you don't have a birth certificate the nation of mexico does recognize them as citizens. so they cant just go to the border and pay $500 to get the right papers to come to the USA legal to work . That means no school no nothing , so they relie on word of mouth to learn how to get by in the USA . Now the gangs are big borther to them . Shows them how to take advantage of the system .I can show more of what really is happen but I don't have all day to tell you . just open your eyes . This once great nation works on 1 step forward, 2 steps backward .

Citizen; thanks for your comments. I agree that, overall, we have been just grinding through on labor evolution after another, with the most identifiable trend being the exporting of American jobs to 3rd world nations.
The politicians talk a good game about bringing jobs back to America but their legislation nearly always create conditions which encourage it. Witness Obama's many pleas about bringing jobs back home...when his own Obamacare system was farmed out to a Canadian company...happens all the time with both parties equally guilty.

Wrote all morning on this subject to you and what happened? Must be 4096 characters or less. CRAP! So it's all deleted. All or Nothing I always say! Now the following drivel is all you get.

Unions support Amnesty because if it is not passed they wouldn't have any enrollment.Illegals fill the union halls now.

Why does everyone not go after the politicians for breaking the immigration laws allowing all these illegals. They are who made this possible not securing our borders and not allowing civilians to secure it either. Stop hounding the employers. They are working with the only labor force left. American youth certainly don't want to work anymore. If the job doesn't have CEO on the door it is beneath them, and work where mexicans work?? Are you crazy, they are WAY above that. Stupid people with all that Self
Esteem!! Thanks union teachers.

BTW, I just watched a video that supposes the USA pulls out of the world, withdrawing all military service and 60% of the military budget to be used within our borders for medicare, to infrastructure. Wow what a concept.

It's called "A World Without Us" on Netflix

It's funny how the left feels it's ok to let the illegal's stay here and work driving construction wages down, but in the same breath they want to double "fast food" workers wages. The jobs that were meant for teenagers not adults with families. Amazing.

Hi Ken, I've read your comments on here for quite some time now. I just searched on Netflix for that movie " a world without us" and am unable to find it. I was wondering if maybe you could double check the title, as I would like to check it out. Thank you in advance and have a nice weekend.

Ken, I have no idea how google runs their comments section; my brother says he posts by mobile and often gets scratched after writing a long comment.
Next time you write a long one be sure and copy and paste that bad boy before you hit publish...

Don't agree with you on letting the employer off. Read my blog on the .99 cent egg slicer a couple of years ago. There is no more corporate citizenship; only a worshipping of the bottom line, thus the exporting of jobs overseas, hiring cheap illegal labor, etc. And yes, we've got tons of lazies these days that won't work, but I know dozens of people personally who would love to have those good paying jobs that illegals and employers rob from them through the cash only, underground economy.

Brian, re the $15 fast food jobs and construction labor rate suppression, I"ve given up trying to rationalize what the liberals think, believe, and do.

Hey Brian,
I checked and the title is actually, "The World Without Us". A very interesting idea. Enjoy