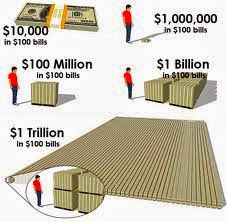 Okay, for one day...and one day only, let's toss politics aside and just talk hard numbers...the only hard numbers we need to worry about for now.  For, in the coming days, a deal will be reached that will approve still another raise in the national debt ceiling.  Both parties can scream all they want but a deal will get done.

Okay, I know it's hard to grasp the idea of a trillion dollars...it is so vast and such an unwieldy thing to get your head around, let's look at it in ways we can understand.

When you break down Obama's budget you see that $800 billion of all federal income this year will go toward paying "just the interest" on the national debt...not a dime of principal.  And during the course of the coming year, we are adding another trillion dollars on the current debt level of $16.7 trillion.  So onerous is this interest that, when you break down Obama's own budget, you see that, come next October 1st, the national debt rises to $18.4 trillion!  And that's if Obama can squeeze 3 percent GDP growth out of an already struggling economy!  What are the odds of that happening?  Well the economists who've been right on so far are saying we'll grow at 2%.  Guess what?  That 1% difference in GDP growth is going to add hundreds of billions more to the current annual deficit!

So what is a realistic projection of our next October debt level?  Sadly, we have no idea because, while the Office of Management and Budget projects an additional $1.3 trillion added to the deficit will be needed to subsidize Obamacare for some 30 million people, the President's budget doesn't even include these subsidies.  If Obama is wrong and the OMB is right, our national debt next October will be well over $20 trillion dollars!

Now let's simplify this a bit more.  If we are currently spending $800 billion dollars a year just to pay the interest on the deficit, and we have roughly $2.5 trillion dollars in total tax receipts coming in, we are paying 30% of all government income on our "interest only" loan!  To simply that even further, imagine you have an interest only home loan of $200,000 dollars, and you are shelling out one third of all your income to service that debt...and you have no hope of ever being able to pay one cent in principal...what kind of life are you leading?  What kind of future do you see for yourself?

Now back to Uncle Sam and next year's $20 trillion dollar debt.  Now take that same $2.5 trillion dollar in tax receipts and allocate enough money from them to pay the interest on that now monstrous $20 trillion!  Anyone have a calculator?  Cause mine shows by next year we are going to be paying nearly 40% of all tax revenue, just to service the interest on that national debt!

And what does that do to the other government programs?  Where's the money to pay pensions, fund our military, for welfare and education and housing, and yes...Obamacare subsidies!

If we stopped deficit spending now it would hurt some...but not as much as it's gonna hurt later.
Will politicians ever do it?  No, because government "give-me's is how they stay in power.

Shall I drive you to even greater frustration?  Folks, the national debt is really the only debt that politicians will talk about...but that's only a fraction of our "real debt".  You see, we have a little thing called "unfunded liabilities" and government economists put that debt level at $72 trillion dollars!  These unfunded liabilities are such things as, future medicare, medicaid obligations,  Social Security Trust Fund I.O.U's that have been exploding since the trust fund was robbed beginning in 1965.  Other debt not carried "on the books" are generous pensions for millions of retired federal workers.  And they include trillions on the books of the Federal Reserve as they print paper money without the real capital to back it up!  So folks, what we really have is about one hundred trillion dollars in real debt.


How will America solve it?

Still think raising the debt ceiling is a good idea?

Only Cruz, Rubio, Paul are telling the truth

You buying default fiction? Your loss

I had no idea the debt was that bad, did not include the unfunded stuff myself. I did know the default threat was bs.Time to tighten the belt,suck it up and cut off the flow from the govt tit.

'Cutting off the flow' will never happen. Only if there's a complete meltdown. Then the riots will start. Then maybe that leads to another civil war.....who knows! But it's gonna get UGLY cuz we can't continue like this forever.

Craig, that's because the federal government ever shows an honest and true figure on the debt interest. If you go to a federal pie chart it will show they are paying 7% of the "already inflated budget (with the the annual deficit already factored in..thus making it look like less. Then, even the so called non political Office of Management and Budget shows the following:

So, the OMB figures indicate an interest expense annually of only 20 percent. But then, you have the Federal Reserve issuing "play money" each month to stimulate the sluggish economy...the Fed accounts for over a trillion dollars on their books that, at some point must be settled, either by inflation or another means. Then, there are several government programs on that pie chart that are carrying their own program deficits, which are all added to the national debt at the end of each fiscal year. The government presents their debt in such a convoluted way that you don't see it until it shows up on the national debt clock. That's why it is much simpler just to take total debt, total of all interest payments, then divide by total annual federal revenue...thus the very scary 30% being laid out to pay interest on it...and getting worse each year.

keep your money (gold and silver) close, and your guns closer. its coming soon very soon

keep your money (gold and silver) close, and your guns closer. its coming soon very soon

Craig, I forgot to add that the role the FED plays in managing our national debt is significant. As you probably know, Bernanke as kept borrowing rates at zero (fed loans to banks)..Now, since "some inflation" does exist, the 0 loan rates are actually a "negative borrowing costs (because the Fed is printing money at 0 and not factoring in inflation at all). By keeping loan rates at 0 the federal government is getting a huge break because that interest on the national debt would be unmanageable if we were to return to the historic average inflation of six percent year.
However, that only works for awhile..eventually commodity costs will catch up to the norm and then the fed can't stop the runaway inflation (as we saw in the 70's with Carter (20 percent prime rate).

Sure thing, Carol! Look what happened at Walmart stores this week when with a 17 state temporary lockout of food stamp cards...multiply that by a thousand and you've got the level of chaos that's gonna happen when Sam can't provide all that gravy...

That was my scenario when I wrote about the 2nd Civil War...sad.

Brian Kalifornia,
That was pretty scary, or a peek at reailty this weekend of what will happened. Imagine if that was for real. It didn't take long for the POS's to freak out on just a computer glitch. Wow! They are going to take their BS to the streets and assault innocent people.

When you hear or read about our debt, it's so disheartening and realize it is nearly impossible to pay back. How can anyone associated with this buffoonery think it is alright to keep spending more. Does no one care about this once great Nation? It breaks my heart knowing it is just a matter of time before we fall.

We need to vote EVERYONE out and hopefully vote in people with common sense. This is a democrat and rebublican created problem both side are guilty. But it's probaly to late, we'll see.

Brian, those Walmart sub-humans were already tweeting that they have to "kill Whitey" about this...so yeah, you're right...be ready.

I've read this 3 times today, just to see if my level of nausea might subside. NOPE!
I've spent some time and resources to get ready for something like this, yet I question if it will be enough when the animals take to the streets. I fear we may be entering a very dark period of American history.
Sad. Damned sad.

Brian, I have to tell you that I was a bit heartened when I hear Paul Ryan had come up with a 'debt reduction plan"...then I read it....even a so called conservative like Ryan had the national debt hitting $20 trillion in 2020..and that was after some pretty tough entitlement cuts...

hard to figure how you solve this...Reagan actually grew us out of much of the debt since the GDP was so big that the percentage of debt actually shrank. Clinton also enjoyed a great second term when those internet boom capital gains contributed fully a third of all tax receipts that year. If we could just put the economy on steroids for five years or so we could make a huge dent in the debt...otherwise?