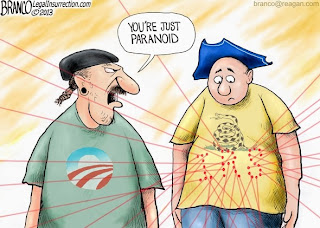 Were you bothered just a little when you learned that Barack Obama was able to reach into the very bowels of the IRS and decide who gets to be a political organization, who gets to raise political funding, who gets expedited service, and who gets harassed?  After learning that the government has already got their hands on your phone calls and email records, are you concerned about how oppressive "big government" has invaded your personal lives?

As you planned your family, based on your ability to support it, does it bother you that there are millions of Americans who breed irresponsibly, cannot support the kids they breed, must rely on taxpayer welfare and WIC and Section 8 housing, Medicaid and food stamps to raise their herd, then are rewarded by the IRS with billions in Child Tax Credits?

The United States Treasury has projected that over two trillion dollars of our nation's Gross National Product escape taxation through the underground "cash only" economy.  If taxed, that two trillion dollars would yield over $400 billion dollars in additional tax revenue.  Does it bother you that you are paying your fair share of taxes while millions of tax cheaters pay nothing?

Does it bother you that there are people drawing welfare who drive a later model car than you..and own big screen televisions and I-phones and high tech gaming systems?

And what about the rich cats who hire lawyers who are smarter than IRS lawyers so that they can take advantage of tax shelters and pay no tax on their millions in income?

Does it bother you that politicians use the power of the purse, your tax dollars, to "buy" votes?  They do it every day by expanding larger and larger social service programs.  Indeed, with 50% of America paying no taxes at all, the Democrats have cemented in a solid foundation of a voting electorate subject to green check bribes to support the Democratic machine.

The fix?  Simply do away with the individual income tax and implement a 15% national sales tax on all product and service transactions, with food and medicine being the only exemptions.

With a national sales tax you have just captured all that underground money because tax cheaters and drug cartels and gang activity and welfare breeders and illegal Mexicans and, yes, even politicians are swept up in the world of free market commerce and are forced to pay their fair share!

And this national sales tax has been proposed again and again, most always by honest politicians who seriously want to rid the nation, and our nation's capital of the corruption that the current tax system perpetuates.  Steve Forbes and most recently Mike Huckabee have urged the implementation of a national sales tax to replace the income tax.

So, if it is such a good idea why has it not been implemented?  Because thousands of tax lawyers would be out of a job.  The fat cats on Wall Street would be paying huge sums into the Treasury.  Politicians would lose the power to buy votes through social program handouts.  Turbotax would go broke.  Tens of thousands of small businesses would lose their ability to conceal income.

And sadly, unless Americans elect a President that incorporates the adoption of a national sales tax into his election platform, we're not likely to see it happen.  Even should we elect a President who promises to implement the program, it would require massive public pressure to overcome the K-Street lobbyists and the many in Congress corrupted by both the wealthy and the 30 million career tit-suckers who thrive on that huge government gravy train!

Does that mean it is impossible to accomplish?  Hell no!  Talk it up people!  By neutering the IRS, and the President, and far too many fat ass Congressman, enriched beyond measure by the current tax code, you would go far in getting government off your back, out of your lives, and you would force millions of leeches, both rich and poor, to carry their share of the load!

As one who has seen welfare breeders up close and personal, I could not agree with this more. It does bother me that Uncle Sam wants to listen to my phone calls and read my emails. Why? I'm just a peon. I'm afraid it's the beginning of something even bigger and badder. I think it's time to pull the plug on the welfare system most of all. Why are we sitting back and letting this happen?

Totally agree, we need to get this information out to our friends, family and coworkers. We need to get the f-ing government out of our lives. Need to have people pay their fare share, rich or poor so everyone one has "skin" in the game. Just when you think the prez or government can't get any crazier, they do. The prez doesn't know about any of the "Flap Jackery" going on around him? Really. This administration is a JOKE! Waiting for the first shot. Revolt, Revolt, Revolt!

Totally agree, we need to get this information out to our friends, family and coworkers. We need to get the f-ing government out of our lives. Need to have people pay their fare share, rich or poor so everyone one has "skin" in the game. Just when you think the prez or government can't get any crazier, they do. The prez doesn't know about any of the "Flap Jackery" going on around him? Really. This administration is a JOKE! Waiting for the first shot. Revolt, Revolt, Revolt!

Wow, Brian California...I do believe you're ready to "suit up!"....our time will come my friend.