The Forest For The Trees 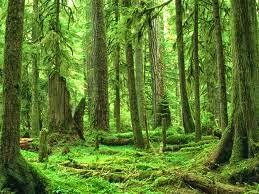 Each morning we wake up, open up the newspaper, turn on the television, or fire up the computer, and we will surely read about something that shakes our world a bit...something that goes against the old values we've held for a lifetime.

Too many times we ponder that even in isolation; we say that doesn't make sense!  We question how the vilest of acts could have been perpetrated in the world we knew so well!  I am as guilty of looking at things with too much simplicity as anyone else.

But when you really take a step back, when you think about how that vile crime, or that monstrous attack on human dignity, or that variation on moral behavior, you can more easily understand the world we are living in today.  Sometimes, we must step back from the trees in order to see the whole forest.

And having stepped back, and having pondered today's ever evolving world, I would argue that we are living through the total collapse of our institutions, the code of law and the code of conduct that makes us civilized.

You can see the ravages of our own destruction in the character of our people and the quality of our politicians.  If I may, let me just offer a few examples of how our institutions are crumbling:

Do you recall five years ago when, in order to curry political favor, our politicians began waging an all out war on the banking system?  Do you recall, rather than investigating and prosecuting those banks who violated at least the spirit of the law, the Barney Franks and Nancy Pelosi's and Chris Dodds and the President just threw a wet blanket on the entire banking system?  Do you recall how even the community banks, who had no involvement with CDO trades, were forced to close their doors when the FED tightened reserve requirements?  Do you recall how that deepened even further the housing collapse, since no bank would sacrifice their reserves and take a chance on mortgage lending?

Okay, the government, being controlled by big government devotees, over played their hand and nearly destroyed the real estate market.  But even those blunders were simply dumb mistakes.  What happened next is where we began to undermine the founding principles of our society.

You see there's a little thing called "contract law", written about ten centuries ago, and codified some 500 hundred years ago, and designated as one of the founding pillars of any civilization.  When the honoring of contracts are no longer in force the economy and society begins to break down.  And we saw thousands of breaches of contract law during the past five years.

For example, a mortgage is a contract, a mutual agreement by two parties to honor the tenets of that contract.  And yet, to curry political favor, the Obama administration browbeat the banks to reduce the principle on loans in danger of foreclosure.  Using the big bank villains Obama time and time again lashed out at greedy banks who refused to cover for home buyers who greedily over paid for housing, or who sunk into debt with 2nd mortgages to finance new furniture, swimming pools, and even European vacations.  In effect, we had the President of the United States advocating for a breach of contract law.  We saw even worse in Kalifornia when both the state and municipalities filed "eminent domain" against banks owning mortgages; the government then took over the house, reduced the principal on the mortgage by having the taxpayer assume the loss, then gave it back to the original tenant owner at a much lower price....and not once did the communistic Kalifornia government question why the resident owner was not making his mortgage payments!

And what kind of effect has that had on housing?  After five years housing prices have still not recovered to the pre-crash levels.  The intervention of the government into the free market, and the reluctance of banks to issue mortgage paper is all due to the uncertainty that those mortgage contracts will be honored in future years.  And sadly, those breaches of contract law permeate throughout our economic system and will eventually destroy us.

Let's look at civil and criminal law statutes as well.  What kind of citizens will we have, how much respect for the law will they have when they see the President himself picking and choosing which laws he wants to enforce and which he will choose to ignore?  Just as he has ignored our immigration laws, and given comfort to Mexican invaders, he has chosen to enforce laws which don't exist!  That's a gunslinger approach to the law and will destroy us even sooner.  How soon till a formerly honest taxpayer just says "screw it" and begins not paying his taxes?

Folks, when we see reports, as we have this week, of a totally corrupt Congress, making their own special laws, and writing their own precious exemptions, in order to gain fame and fortune, what trust can we have that our representative leaders are working for our benefit?  When that trust, now greatly eroded, is gone forever, we'll have chaos and civil war and a breakdown of civilized society.

And it is all of our national institutions that are crumbling; it is the mailman we read about the other day who threw a weeks worth of mail into the dumpster and went home.  Through the years we have placed great value and great trust in the U.S Postal System...and yet, in recent years, we've read reports of mailmen stealing and cashing pension checks!

We see more and more corruption in our public service workers as they ally themselves with politicians to build huge pay and retirement packages.  We see the IRS get deeply involved in our personal politics.  We see government tapping our phone lines and intercepting our emails.  We see the expansive use of drones to further deny us our basic right to privacy.  We see cabinet members and Congressmen cheating on their taxes.

You see folks, every time we get up in the morning, and we read about the rogue mailman, or the tax-cheating Congressman, we are seeing the "trees"...we must learn to look at these problems more deeply.  We must learn to identify the trends...and we must be deathly afraid of how our institutions are crumbling right before our eyes.

That's one of the reason I despise the massive Mexican invasion.  Those 30 to 50 million illegals cannot be a positive for our nation, already under moral assault.   Do we want our children gunned down by drug cartels?  Do we want a postal system that we can't trust to deliver to us honestly?  Do we want even more political corruption where every member of Congress is open to a bribe?  Do we want our police patrolling our neighborhoods...or back at the coffee shop running their 401k report and calculating when they can retire in ease and luxury!

Thank God there are many millions of Americans who are still decent and law abiding and moral people.  But beware, millions of us have already flown to the dark side, charmed by a green check or economic expediency....or just a growing disrespect for our laws.  And no one except the good guys can arrest the total breakdown of our laws and our institutions.

"Alas, the fault dear Brutus, is not in the stars, but in ourselves."

What a depressing read! How does one comment on that?

I picked up a magazine at the doctor office last week and went to an interesting news article that was written about a year ago. It was about a money laundering ring that managed to launder and put back in circulation not millions, not billions but trillions of dollars (200-300 trillion) for mexican drug cartels, and mid east terrorist groups. It was done under the nose of our own banking officials. They were warned officially several hundred times! The bank was HSBC, a British bank and UBS a US concern, I think. This went on for years, and quite blatantly! Well, by golly, we finally had enough and hauled off and sent them a nasty letter telling them that "We've had enough, stop doing that!". That was the end of it. They were fined less than twenty billion, approximately three months profit! They continue in business, not one person lost their job and no one went to jail!!
Apparently the obama's concluded, I'm sure after they received a handsome payment, that this bank was to big to shut down. To be fair the bank's transgressions were found out and the warnings started during W. Bush's reign. George Bush, the great terrorist killer and defender of our nation.

Stories like this are way too prevalent these days. We all just stand by and bitch about it. I thought I would spend my golden declining years in pleasurable peace and quiet. Instead I see my home being destroyed by a new wave culture of nothing but trash. Selfish, self centered, egotistical, amoral ignorant spoiled brats. Adding to that population are millions of illegals who have absolutely no respect for our laws. After all their first act here was to break the law.

I have no answers. The problem is so huge and so many. Where do we start? It's just so overwhelming! Well there goes Sunday. I think I'll go and...