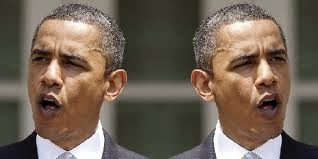 We knew of his duplicity as early as January 2009.  He had campaigned on establishing a government built on honesty and immediately hired cabinet members and staff who had cheated on their taxes.

He vowed to steer his administration toward leading a government of transparency, free of Washington lobbyists.  He vowed lobbyists would never enter the White House grounds.  Then, we learned that lobbyists were visiting the President on a regular basis, and to cover it up, the White House was maintaining two sets of visitor log books.

He vowed that there would be no "red states" or "blue states" only American states...and then as soon as he was elected he began suing more than two dozens "red states" because they didn't agree with his view of states rights, immigration and voter ID laws.

He vowed to get out of Iraq in the first year, yet the last troop left three years later...on George Bush's original timetable.  He vowed to rid Iran of nuclear weapons..and five years later Iran is the most dangerous trouble spot on earth.

He vowed to work with Republicans on legislation...then total shut them out on both both the wasteful trillion dollar stimulus bill as well as Obamacare, both of the them written behind closed doors, with billions in bribes handed out to his liberal friends in Congress to win passage.

He condemned the Patriot act when campaigning.....then continued it after he was elected.

He promised to close Guantanamo and move prisoners for trial in America...when every state in the nation refuse to house the terrorists he kept Guantanomo open and swallowed his "holier than thou" rhetoric.

He promised the American people that, if they let him spend a trillion dollars in stimulus he would restore full employment; and it got it even worse as tens of millions left the work force and millions more were laid off in advance of Obamacare implementation.

He promised to enforce our nation's immigration laws, but when he needed the Hispanic vote to win re-election, he stopped enforcing the laws of the land.

Before taking office he was in support of the Defense of Marriage Act, then when he need the gay vote to win re-election he came out in support of gay marriage.

He promised Obamacare would run smoothly like a fine Swiss Watch and premiums would decline...instead they have risen as much as 500% and his enrollment program lays in ruins.

He vowed to fight the Mexican drug cartels to keep drugs from our youth...then furnished 2,000 assault rifles to the drug cartels, which were used to kill our citizens and our border agents.

He vowed to be honest in his failings and respectful of the Constitution, then stomped the 1st Amendment into the ground by using government operatives to sift through reporters emails and telephone records.

He vowed to honor the personal rights of every American, then ordered the Justice Department to monitor our emails and telephone calls.  He then reached into the very bowels of the IRS to reward his political friends and punish his political enemies.

No...not the paranoid Richard Nixon....he was forced to resign in disgrace....yes, it's the arrogant and paranoid Barack Hussein Obama, schooled in Chicago politics, inspired by radical Muslims, tutored as a teen by the most notorious Communist in American history (Frank Marshall Davis), the Barack Obama who speaks with fork tongue...and god help us, maybe with a pitch fork in hand as well.

It has been said 67% of the people do not support obummer care,can we get the same number to call for the impeachment to begin?

Mike, you have Democrats dominating the Senate...so doesn't matter what Obama does, he's got a free ride.

His duplicity is well documented well before 2009. Had those who voted, learned to vote like responsible adults and investigate the background of the person they cast their single most important contribution to this country, their vote toward, they would have known fully what a cheesy, two faced, criminal this bastard is. He is nothing but chicago ghetto gimme my free shit trash. Too bad the new guard couldn't give two shits about anything but their own selves.

Ken, I would like to congratulate you on "chicago ghetto gimme my free shit trash"...that's a totally new and original one...one that I'm going to have to file away for future use. :)

The problems of this country have become so convoluted that I believe nothing short of open rebellion and complete reform are neccesary.
Do you know the difference between a crook and a career politician?
The spelling.

Agree, Brian...that's why I predict a Civil War is imminent.