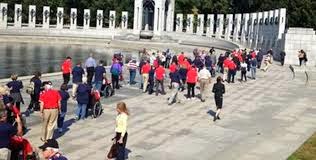 Sixty Nine years before they had stormed Omaha Beach and Utah Beach amidst a hail of German machine gun fire.  Their progress was measured in inches as thousands of their buddies were gunned down before them, heads and arms and legs being blasted off bodies.  Still they moved on, reached the climbing ropes and scaled those sea walls to get at those German machine gun emplacements racking up so much carnage.

So yesterday when two companies of WWII vets, one from Iowa and one from Mississippi, came upon a yellow taped barrier to the WWII Memorial they were unlikely to be turned away by yellow plastic or threats of arrest from the White House.  These 90 year olds were contingents of a project called "Honor Flights".  Sponsored by Starts and Stripes, the program enlists the help of American citizens to sponsor and accompany a WWII vet's trip to D.C. to visit their monument.  However, even though the monument is in an open air area and requires no federal manpower to keep it open, Obama had ordered all open air monuments closed to the public, all part of his "revenge" campaign to cause as much public suffering as possible in a snit over the budget disputes with Congress.

As the Vets arrived, and encountered the barricades, they called both the White House and Congress.  The White House ordered the Vets to disperse and warned them that if they tried to cross the barricade they would be arrested.  Fortunately, a number of Republican Congressmen, including Congressman Steve King, from Iowa, responded to the memorial and distracted the Park Ranger on site long enough for the Vets to break through the barricade.

The old vets used their canes and their wheelchairs to bust through, then marched on to the memorial site.  Soon the media arrived and began interviewing some of the vets.  Most did not want to talk but instead wanted to pay tribute to all of their buddies who didn't make it back from that fearsome war; a war that took the lives of 400,000 Americans.  One who did consent to an interview simply said "we WWII vets are dying off at one per every 90 seconds.  We came all this way to see our memorial because we don't have a hell of a lot of time left to us...and we certainly weren't going to come all this way, only to be stopped outside, barred from the only chance we'd ever get a chance to pay our respects".

There are several more Honor Flights scheduled to arrive in Washington in the coming weeks.  However the White House has advised them that they will be turned away if they try to repeat yesterday's order of action.

But yesterday it was WWII Vets 1, Chicago Organizer 0.

This morning Washingtonians were no doubt touched by a group of young people standing guard at the WWII Memorial.  These young folks were carrying the torch for the old Vets...as they carried signs that said "Mr. Obama...tear down this wall!".
Posted by A Modest Scribler at 8:03 AM

The contempt the White House shows to these great men is deplorable. Both my grandfathers served during WW2 one earning a purple heart as a foot soldier in Europe. It seems as though each new day brings about another reason to despise this president and the government he heads.

Can you put an address on here so we can send donations to these heros of ours? It's a shame 2016 is so far away

Tony and Brian, there are a couple of groups that sound like Honor Flight (honor flight.com, etc...but the correct organization is Honor Flight.org. They are the only group flying our Vets for free. the address to send even small donations is as follows;


The time to act is NOW!
In another 5-7 years almost all of our World War II veterans will be gone. This tour is their "last hurrah" - the last time they will be recognized as the conquering victors that collectively and literally saved the world. To this day most of Europe is free, most of the Pacific is free and America is free. This freedom came at a very high cost. We can never repay them for what they've done. An “Honor Flight Tour” is simply a small token of our appreciation for everything they've done. Throughout their Honor Flight Network tour, the Veterans are thanked, recognized and admired for their service. They come home personally knowing how much their country loves them and respects them. Veterans will never forget this gratitude and adoration.

Please help us rewrite this final chapter of their lives. Our American Veterans deserve nothing less. Equal priority is given to any terminally ill veteran who has never visited their Memorials. If America thought it was important to build a memorial to their service and sacrifice, Honor Flight Network believes it's important for them to visit their memorial before it's too late.

The results of our independent audit and our IRS Form 990 (tax filing) are available for public review. If you would like a copy, please see "Financials" under the "About" Section of our website.
Please mail your tax deductible donation to:
Honor Flight, Inc.

Or make a donation by credit card by clicking here.

By the way, ironically an Honor Flight from Chicago was scheduled to tour the WWII MEMORIAL. Three others also. And there are dozens scheduled this months alone...at a rate of 640 of them dying each day, if Obama continues to turn them away thousands of those heroes will have lost the only chance to see their memorial.