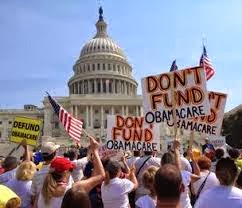 For those of you who don't understand Obamacare, don't you at least wonder why those who do understand it oppose it with a 67% majority?  Why?  Because it's a nasty, expensive, flush with unfairness and inequalities, adds another 30 million free loaders to the already 50 million attached firmly to the public tit.  It puts the federal government, never able to run any program efficiently, directly in charge of a huge chunk of our national economy.

And the 2,300 page bill stunk from the very beginning.  To pass it Obama had to consult his Chicago political thugs and elevate the art of bribery across the board to get it passed.  So many from Obama's own party were against the bill that Obama and Pelosi and Reid were forced to grease the palms of dozens of Democrats.

Let's just look at some of them.  Senator Landrieu of Louisiana copped what was supposed to be an additional $400 million in Federal Medicaid aid as part of the deal.  Somehow, when the bill got written that $400 million got turned into $4.2 billion,  a typo, they claimed,  and yet the correction was never made and Landrieu returned home with $4.2 billion of taxpayer money.

And how many of you remember that Democrat Bill Nelson was so adamantly opposed to Obamacare that Barack had to promise the entire state of Florida that they could keep their Medicare Advantage policies, though he took it away from seniors in the other 49 states!

Remember when Obama took away the rich's Cadillac health plans?  Those are the plush healthcare deals that enable the rich to get their medical needs fulfilled at the Mayo Clinic.  Barack Obama sought to kill those deals by taxing those medical benefits so heavily that they became worthless to the rich.  Then, oops!...Obama discovered that all the Big Unions also had those Cadillac health plans...so he exempted them from paying any excess taxes for another decade or so!  Bought off!

And when Main Street Americans spoke out against Obamacare...when they went nuts at all those town hall meetings, Obama unleashed Harry and Nancy to attack these Americans as anarchists and terrorists!

When C-Span ask to televise your Congress as they were writing the bill, Reid and Pelosi refused.  They went behind closed doors, cut all kinds of deals, spread pork by the billions around the table, then emerged with a 2,300 page bill that Pelosi said "you have to pass it before you read it"...and they did.

They crammed this garbage down America's throat and now, as the woe is finally becoming evident, there are brush fires of protest, the most obvious from the Republican House.  Sadly, it's much too late and the House's strategy is poor.

So after four years a bill that was rife with graft and bribery, still stinks and reeks of the corruption that now permeates all of Washington.

You've surely passed a dairy farm and grabbed your nose trying to hold off the stench until you are well past it.  Those that live nearby say they actually get used to the stink and after a few years it no longer bothers them.  So take heart, the stench of Obamacare will be just as repugnant...but you'll get used to it eventually...after all fully half of you have sat on your asses and remained silent while Obamacare grew into the stinking mess it is.
Posted by A Modest Scribler at 2:00 AM

Very informative as always. Would you mind this getting posted and sent to all that need a little education? Happy Monday.

I encourage it, Craig.

And where did u get this nonsense from?

Fellow readers, did you just see eddie k.'s comments? Do you now see how ignorant these liberals are? How they live in la la land after drinking the Kool-aid? Every single point I made is available through a simple google search...it's been written about in dozens of books, to include liberal Bob Woodward...and this clown asks me "where did you get this nonsense?"

That's why you can never debate a liberal...just total and utter ignorance of even recent history.