Send This Letter To D.C.! 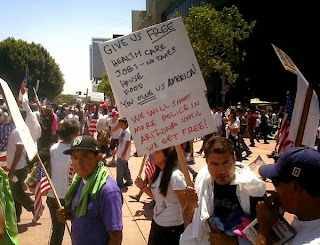 Okay, a couple of years ago you sat on your collective asses, didn't voice your disapproval for Obamacare, and had the massive government intervention into your health care decisions taken over by government bureaucrats.

You now have one last chance to snatch back control of your lives from a corrupted government that issues green checks to buy political power and caters to the most extreme morally corrupt special interest groups.  Just as we did in 2007 you can overwhelm your Congress with letters, emails and phone calls voicing your strong opposition to rewarding illegal invaders with citizenship.

Don't think for a minute Congress will not listen to you.  Shout loud enough, write often enough, let them feel the depth of your anger and you can be damn sure they'll listen.

First of all, if you have not come to a firm decision on how you feel about still another amnesty bill, I urge you to sit down, set aside your emotions about how wrong it is to reward bad behavior, and just consider whether legalizing 30 million more impoverished Mexicans who have suppressed American wages for the past three decades would be a good thing.

With our Social Security, Medicaid and Medicare programs near bankruptcy, do we really need to further burden those programs with adding tens of millions of illegal Mexicans to the rolls?

Is there anyone left that can recall when our auto insurance premiums were reasonable before Latino gangs drove the costs up by the explosive rise in car thefts?   And in every community where these illegals live the hit and run auto accident rates have risen as much as 500 percent!  Do we need more of that?

Do you really want your sedate and lovely neighborhood degraded by Mexican salsa music blaring from garages and back yards and bondoed low riders parked on front lawns?  Do you want to see your home insurance rates rise due to high rates of property crime?  Are you really prepared for more home invasions, rape, robbery and murders?

Do you really want your property tax rates to continue exploding as K-12 education costs continue to increase because of legislative and judicial mandates that we shove aside American students in order to teach English to millions more Mexican kids?

Are you at least mildly irritated that illegal Mexicans absolutely destroyed professional wage rates  for our once thriving construction industry?  And with 30 million Americans unemployed or underemployed, do you really want 30 to 50 million illegal Mexicans taking the few jobs left to you?

And how do you feel when you see thousands of illegal invaders marching freely in our streets, demanding that they be rewarded for breaking our immigration laws?  Do you really feel sympathy for people so arrogant?  Would the Mexican government permit such abhorrent behavior? 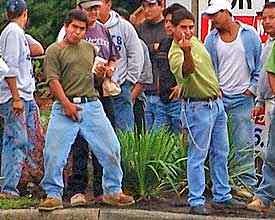 Do you want what's left of "moral and law abiding"  America to disappear?  Do you want to pay graft to your local police or municipal official to receive public service?  Do you want to see your own politicians bow to special interest forces, no matter how wrong, just to win elections?

If you want your government back.  If you want to be heard again.  If you believe illegals should not be rewarded with any form of amnesty.  If you understand that the federal government will never close that border down, and that any amnesty will only encourage further invasion and, ultimately the final destruction of our unique American culture, then copy and paste the following and send it to as many Congressmen and Senators as you can.  Call, email and write and demand our current immigration laws be enforced:

Every bi-partisan poll has show that 67% of us are against immigration reform as it is being written by the United States Senate.

We believe this legislation is an affront to the integrity of our immigration laws and we are outraged that President Obama has chosen to circumvent the Constitution by assuming Executive powers that belong only to the Congress, that selectively enforcing only the laws he agrees with is an impeachable offense, a breach which Congress has ignored and failed to call him on.

Further, we do not believe this President will ever enforce our border immigration laws.  This belief was further enforced by his recent selection of Jeh Johnson as his next Homeland Security Chief.  We were particularly alarmed when the prospective nominee stated he would shift emphasis from border enforcement to the more generic domestic terrorism program.

We are particularly sickened by many in the Republican Party who, following the 2012 election, believe that they must pander to Hispanics in order to win future elections.  67% of us warn you that if you cave into this moral depravity, if you bend to the will of Hispanic interest groups, you will lose mainstream America.

We believe that "immigration reform" are simply code words used by Democrats to make amnesty sound more palatable....and we are fully aware that the Open Borders/Amnesty advocates care more for the idea that they might be giving amnesty to potential voters, while caring not a whit about the detrimental effects wide spread amnesty will have on our nation.

We are prepared to make one exception:  In the case of children brought here by their illegal parents, we say "let's give them a chance for citizenship"...but "they must proved their allegiance to this country and win their citizenship through four years of service in the military or four years of community service.  If they can't commit to that requirement we deem their allegiance as questionable and would send them to Mexico.

We believe in the efforts selective members of the House are doing to improve our immigration laws.  Rather than legislating another huge two thousand word bill, simply legislate mandatory use of E-Verify, impose punishing fines and felony convictions to any employer caught hiring illegal aliens.  Finally, continue to work on border enforcement.  After these tweaks the current immigration laws are still relevant and should be enforced.

Should I find that you voted to give amnesty and a path to citizenship for any of these illegal lawbreakers I will join with any group and support any effort to make sure you are never elected again.

I will, of course, forward your letter. I've been doing this for years now and always get a form letter response from my all Kali socialist representatives telling me that "we will just have to agree to disagree". Boy would I love to spend a few minutes alone with the asshole that coined that statement!!

A sad bit of poetic justice, my mother, a die hard democrat voter, called to complain about her health insurance. She is now 86. Her rate has tripled in two years. Her friend in the county just north of hers has the same exact policy for more than 50% less. I told her it is all the sanctuary cities in her county with all the mexican freeloaders that she is paying the higher rate to cover. It is her catholic church who proudly harbors all these leaches. I had to say, on this one Ma, sadly I don't feel bad for you, just keep votin democrat and see how much more expensive it gets!!

Craig and Ken, please don't limit sending the letters to your reps only. The way we win this one will be in the House and Cantor and Ryan and Boehner are already caving. Send a copy to all three.

My situation is just the opposite; my Congressman is named Trent Franks and he's somewhere to the right of Attila the Hun. I never have to worry about his vote so I usually write the "weak links"; McCain and Flake and Sinema in the House.

I happily passed on your letter with my name on it to all in my state and the others you recommended. I know what my reps will say, Ryan's email wouldn't accept anything from my zip code. Keep up the good fight, futile though it may be. I'll be here with you.