Obama; Most Divisive President Ever? 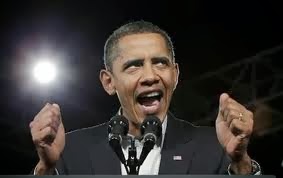 I've been saying for years that Barack Hussein Obama has proven to be the most divisive President ever.  His demonization of opponents, his "my way or the highway" relationship with Congress, his circumvention of the Congress and breach of Constitutional law, his tendency to take sides in any Black-White social dispute, his history with the Reverend "God Damn America" Wright, his hate filled Ebonic-laced speeches to the NAACP, and his absolute failure to honor the opinions of those who oppose his philosophies have divided this nation to heights not seen since the Civil War.

Now, someone has come along and presented a mathematics model that would seem to support my opinion.  Social Analyst Michael Cymbalest conducted a study of every major piece of legislation in the last one hundred years.  Here's what he found: 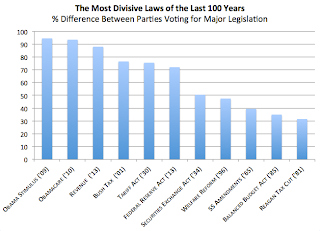 The bar graph above shows the level of opposition by the opposing political party.  Note that fully half of the Democratic Party supported Welfare Reform in 1996.  Other major legislation included expansion of Medicare and Social Security, the 2001 Bush tax cuts, the Balanced Budget Act of 1985, etc.  Notice also that the highest level of opposition came from Barack Obama's two largest "achievements"; the 900 Billion Dollar Stimulus Bill and Obamacare.

Of the opposition noted, the problem with the Stimulus Bill and Obamacare was the way the legislation was crafted in back room deals.  With the Stimulus bill we saw such things as Nancy Pelosi's $15 million dollar rat preserve in San Francisco, Harry Reid's $7 billion dollar "train to no where"; a train that would begin in the middle of the Mojave Desert and carry you to Harry's Vegas casino pals...at a big price!  Obamacare was passed only after Louisiana and Iowa were bought off and thousands of exemptions were granted to corporations, big Unions, and Congress itself.  And Obama was not likely to accrue opposition favor as Republicans were completely shut out of the bill writing process.  The 2,300 page bill was prepared by Dems in private, after which then Speaker Pelosi said "you have to pass it to see what's in it".    That kind of response elicits no warm fuzzies about an Obamacare Program that puts over one third of our entire national economy in the hands of big government.

But it is the way Obama has played one interest group against another throughout his Presidency that has divided our nation so severely.  America has not seen such class warfare since the 1920's, and has not suffered from this level of ethnic tension since the Civl War.

Obama, having won a second term, has advised that he's taking that victory as a mandate for further advancing his socialist goals.  I can't help but believe those powder blue bars are going to go even higher, and America sinking even lower.

I don't believe there is a republican party anymore, in spite of controversy and opposition. Both parties are taking this country down by supporting legislation and policies that are not in the interest of the American people. Amnesty is a great example of this.

Sigh. What can we really do about any of this? What action can be taken that will make any real difference?

He also finds it convienent to ignore his white mothers side of the family, I never hear any mention anyway. Time to impeach obummer then congress.

I saw a recent poll on O'Rielly's show a few days back demonstrating that a huge percentage of Americans would gladly vote to replace all incumbent politicians in 2014. Where is the Tea Party? They need to get loud again, I think they have a lot more support than they think.
It is plain to see, republicans have given up. They stand for absolutely nothing anymore and should they appear to stand up on a subject they are quickly weakened, then tore down with any criticism by the left.
I heard a horrible remark regarding the holocaust a while ago. The comment was by a nazi sympathizer saying that "it was so easy to kill all the Jews because they are such a weak willed people." "It took so very few soldiers to eliminate millions because they had no desire to live, they simply walked to their deaths when instructed to do so". No one dared fight for their lives, no one challenged the soldiers pointing the way to the gas chambers, as though they were purposefully committing suicide by nazi!

I look at our country today and see so many similarities shared between us and the Auschwitz Jews. Our younger generations have been purposefully kept ignorant by our modern day teachers and professors. Teachers, BTW, who constantly complain about their poor salaries yet are turning out useless idiots at an alarming rate.
They are the voters and they are having children. Their children are being taught by an elitist left wing propaganda machine running our public schools. When they come home, it is to a TV set spewing gospel truth according to mtv and the "rapper du jour". When the parents come home they can all watch together such quality tv with programing like, "teen mom", "modern family", "my two dads".
Family shows like Ozzie and Harriet, Andy Griffith, and The Cosby Show are replaced with, The Simpsons, Married with Children, The millers, etc, etc, ad nauseam.

Here I go again, just a rantin' and a railin'. Sadly, I think it is too late for a civil war. Those who want to fight it are getting too old and those young and strong are so happy feigning a back ache they didn't earn and getting their "medical marijuana" card and a soft couch in Mom's basement. I know I am sounding soooo cynical but how can I not. I watch the news and spend too much time reading how a once great nation is rapidly rotting like a bad apple, just as Prime Minister Khrushchev promised it would.

Oh Ya! Those powder blue bars? I agree, they are on their way through the roof. You know how it goes, "a trillion here, a trillion there and pretty soon your talkin' serious money!!"

BTW, If you know where the 2nd Civil War is starting let me know, I'll be there!!

Rebecca and Ken...you are both right of course...many of those in the Republican party are "dirty", having participated in the G. W. Bush spending spree, and abandoning conservative principles.

Most disheartening was the abrupt turn Ryan and McCain and other RINO's took after the 2012 elections...they're convinced that they must now support illegal immigration if Republicans are ever to capture the Senate or win the White House. I disagree...I still believe a hard line is in order and I believe most of Americans agree with that, despite the main stream polls.

As to who will next lead the conservative charge? I really don't know. The Tea Party could very well be the one if it resurrects itself and somehow convinces Americans that we can go no further down this road of runaway spending and abandoning our morals and our laws.

And Ken, yes I still believe the 2nd Civil War is coming. I still believe in the scenario that I outlined in those other Civil War blogs...it will come from uprisings from the the left and right...the left will go "lawless" when there's no more Chinese money to pay for all the entitlement programs and the right, already in a fighting mood when enter the fray, then i'ts everyone for themselves.

Sounds more like an "Un Civil War" you describe. The conservative may do OK as they are more disciplined than idiot liberals but on the other hand, libs are used to crappin on cop cars and living outside in their own piss and puke as demonstrated in recent protests in NY,NY and Oakland, CA.
I just hope I get one of those Wal Mart Unlimited EBT cards before it starts!