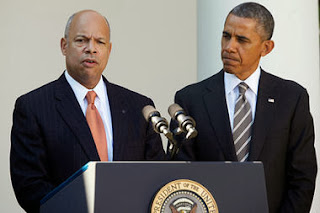 Can Barack Hussein Obama ever get out in front and lead, without tripping over himself?
Just as he poisoned the well with Republicans by ramming through a wasteful stimulus bill, poisoned it further with ramming Obamacare down America's throat, Obama has again sparked a new political war with his pick for the next Secretary of Homeland Security.

As Obama plots to grant amnesty to 30 million illegal Mexicans you would think he would at least put up a good front and nominate someone for Homeland Security who would espouse to be a "border hawk".  Quite the contrary; Obama has trotted out Jeh Johnson, White House insider, and lawyer specializing in liberal social reform.  Johnson's one claim to fame was his successful campaign to incorporate gays into the United States military.

As both trotted out to the Rose Garden yesterday to announce the news, they were all smiles and giggles.  Then Johnson dropped the bomb right into the center of the immigration reform debate.  He says he'll be shifting the emphasis from illegal immigration and border control in order to concentrate on domestic terrorism.  This is a polite way to say Obama and his new Homeland Security Chief are perfectly ready to signal Congress that all that tough border stuff in the Senate's version of the immigration reform is nothing but puffery, to be forgotten right after green cards are issued to 30 million Mexican invaders squatting on American soil and destroying our education and social service programs.

Oh, we can expect to hear all the right things as Johnson goes through the nominating process but I'm betting that the 67 percent of America who are opposed to immigration reform (the ones who ask why we can't just enforce the laws on the books now) and a significant number of Senators and Congressmen who won't be buying Obama's most pitiful pick for Homeland Security.

Perhaps Obama is thinking Johnson's success in ramming gay integration through the Joint Chiefs will be seconded when he ignores the newly minted one million Mexican invaders who jumped the fences in the last three months following Obama's promise to deliver them to the promised land that is America.  Perhaps he's got someone now who'll build housing and come up with EBT cards for all those whom Obama has protected from deportation.

But, don't look for any  immigration bill this year...Obama just killed any chance of getting legislation passed, especially when he nominated a border dove for the job.

Always astounded at the "man-child's" arrogance and stupidity.

Arrogance, yes. Stupidity; not so much. Deviousness might be a better description. . . . .he's succeeding at what he has set out to do & even received TWO terms to accomplish it!

I don't know, Carol...this one seems pretty stupid..if I were trying to legalize 30 million illegals I would try to fool Congress into thinking i was really going to enforce all those strong border control laws they included in the legislation. By nominating a border dove..and having him say he's not going to be focusing on border control kind of signals you're not serious about enforcing the future laws...just like the current laws Obama won't enforce.