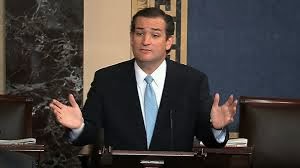 The other night Senator Ted Cruz, Republican Senator from Texas stood up and spoke against the funding of Obamacare for 21 plus hours.  He cited the already proven inefficiencies in the program, the massive $13 trillion dollars added to the deficit and the ever increasing government oppression in our personal lives.

Both Senator Paul and Senator Rubio were in the Senate chambers cheering him on and assisting when Cruz needed a sip of water.

How dumb these guys are.  They are fighting with principle against a tide of superficiality and ignorance.  Oh sure, there was once a time when the American people took their citizenship duties seriously, following the politics of the day, reading or watching politics neutral reporting and making sound decisions.

These days the American populace is made up of people who can't read the English language and are far more preoccupied with the comings and goings of Miley Cyrus and Beyonce and the last episode of Glee than the doings of their own government, no matter how corrupt that government becomes.

If these radical Tea Partiers continue to upset old corrupted John McCain they will surely split the Republican party right down the middle.  These radicals have got to quit insisting on balanced budgets and responsive government.  If not, they'll lose every election.

And how dare these Tea Party folks demand that Congress and the President and all their staff and the big unions and corporate donors participate in Obamacare!  The Royals do not eat with the serfs!  Besides the American people are so stupid they don't even know that the government is paying for their premiums even as they eliminate it as a tax deduction for employers and mandate that healthcare be included as income for taxpayers!  These Tea Party folks must be nuts!

The key to success in today's America is to ignore that $17 trillion dollar deficit, ignore Obamacare adding another $13 trillion to that total, promise a free chicken in every pot, free cell phones, more food stamps and more bad home loan forgiveness if they hope to win over this generation of Americans...the last thing they want to hear is alot of bad news out of Washington.

Ironically, the last all night filibuster on the Senate floor was completed by a Democrat; Senator William Proxmire from Wisconsin.  Yes, I said a Democrat.  He was filibustering against adding to the then national debt of a few hundred million dollars.

How times change.  Now all Americans want are a free ride on the gravy train..and damn the costs or consequences.  Put it on their grandkid's bill.....and tell those damn terrorist Tea Partiers to shut the hell up!

Agreed, Craig...and any Senator that's been there longer than three terms..like McCain

Amazing to me how few comments you get on a topic like this and how many liberal idiots call you to task when the topic is welfare reform or homosexuality. I guess your sarcasm is above the second grade reading level of the "New Millennium American", or am I the idiot here?

The next liberal that calls me or anyone a "teabagger" will feel my fist, even if it's my mother!

keep in mind, Ken, that half of America is now illiterate...I'm sure at least half thought I was promoting liberalism.

So typical that the liberal media only reported on Cruz reading "Green Eggs and Ham" and none of the information Mr. Cruz was imparting on the budget and the ACA. The media was not only withholding all the facts but they were giving the dumbed-down version for the ga ga crowd.

Virginia, the liberals..and their media thrive on a foundation of lies and dishonesty...we've seen all of the edits and cuts and holdbacks and subtle shadings..anything to filter out a positive message.