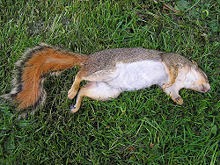 Okay, this morning I sat down to my breakfast of coffee and a Orowheat Whole Grain Raisin Muffin, with sugar-free marmalade.  I open page two of my morning newspaper and find that the state of Montana has just revised their state laws on road kill consumption.   I immediately backed away from my muffin and read on.

It seems that, under the old law, Montanans who run over wild animals were allowed to consume them, but only after bringing the carcass to the nearest law enforcement agency to receive an "eating permit". Be it elk, deer, squirrel, armadillo, snake, or skunk, you must swear that the road kill is less than 24 hours old and that you intend to eat same within that 24 hour "eating window".

However, those wise and practical government folks up in Montana realize that we are now in the digital age and have revised their road kill law accordingly.  Effective 1 November you may take your road kill home and apply online for state permission to sear your skunk.  You must swear that the deceased has been dead less than 24 hours and your intent is to eat him right away.  One caveat; if you choose road kill "take out" you must take the whole carcass...you may not "field strip" the animal at the roadside since the entrails and such would attract other animals who might soon be road kill as well.

Well..I'll be damned if I wasn't enthralled by all this and was quickly drawn to my computer and began googling the hell out of "road kill".  Now, I knew that some of those rural folks down south enjoyed a little road kill once in awhile but I had no idea how popular roadkill cuisine has become across our nation.

One of the first google hits I got was an article from the New York Times that reported on the growing popularity of road kill.  The informative NY Times reporter said there have been road kill festivals in the South for years.  Folks drive for miles to these festivals (no doubt swerving all over the road) and bring their favorite road kill recipe.  One festival down in Kentucky has grown from 2,000 attendees a decade ago to 20,000 famished road kill connoisseurs today!  One festival veteran avowed that he was partial to skunk stew and ground hog gravy but said he did occasionally run into a dish that just didn't suit his palate.  He said one year a fellow made rattlesnake gravy by stirring up some lard and flour, adding buttermilk, then throwing in a rattlesnake into the concoction.  The fellow said he had a hell of a time downing that rattler.

After reading this article something was rattling around in the back of my head, then finally emerged.  I remember reading an Arizona Highways article about a place up north of me, up on Route 66, that specializes in road kill fare.  It's called the Road Kill Cafe.   Apparently they get a lot of road kill on the old "mother road" and the chef there rises early in the morning and scours the highway for that day's "carcass de jour".  The good folks at the Road Kill cafe will even cook what you have run over yourself for a "prep" fee. 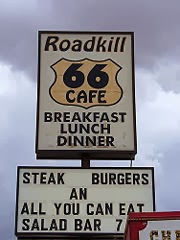 My next hit was to a Wikipedia link that described how roadkill cuisine is a long honored and practiced America tradition, so widely followed that there is now an entire America subculture that enjoys a good "Goodyear tenderized" skunk or squirrel.

Wikihow then offers "The Nine Essential Steps For Finding, Cooking, and Enjoying Road Kill Cuisine".  They address the art of skinning and filleting and recognizing "tissue bruising" from those front bumper kills.

It's probably my imagination but as I typed these last words I gazed down at my two Chihuahuas and considered how much of a hefty stew they might make....and received a rueful look from them as if they intuitively knew what I was thinking.

Oh well...back to my whole wheat muffin and my mundane life.   Sigh...

As much as I enjoy your political writings, I do get a kick out of these more light hearted pieces. Thanks and enjoy the weekend.

Hi Brian, hope you're having a good weekend. Today's blog was inspired by my reading about that new Montana road kill law, just as described. It has me laughing out loud because it was reported in such a straight forward manner, not at all as something humorous....which made it all the more funny.

The rest of it was just as I described as well...I read about ten articles on the subject and could have read more, all fascinating. Thus writing it was easy, took no more than ten minutes since all the info was still fresh in my mind.

I enjoy writing these as well...sometimes I put them in my other blog (the gentler and kinder, "Good News Journal"...

By the way Brian, make sure you're aware of my Kindle giveaway (see Kindle Giveaway blog entry). All my old "followers" are automatically entered. Newbies need to sign up as "follower" and send me an email.

A good friend of mine told me the best venison he ever had was some backstrap he cut off a road kill deer.