The Military; The Last Crumbling Institution 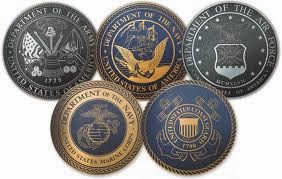 News came out this week that the U.S. Air Force Academy is bowing to an anti-religious extremist group who are demanding that cadets be excused from saying "so help me God" when being sworn into their oath of office.  The pressure group is the fine sounding "Military Foundation For Religious Freedom", an anti-religious group, run by a pseudo RINO conservative named Mikey Weinstein, and promoted by former MASH actor Mike Farrell who has spent his post MASH decades campaigning for every liberal cause dreamed up by California liberals.  Part of their motto is "their is no God in the U.S. Military."  The organization is funded by liberals, and thanks to Valerie Jarrett on Obama's White House staff,  they are now included in the Combined Federal Campaign, and allocated a portion of the charity to divorce the soldier from God.

Oh, I don't know if removing "so help me God" from our oath is such a big thing anymore.  The military has been under attack ever since Clinton introduced "Don't Ask, Don't Tell" into military directives, the first toe hold, the first "nose in the tent" for opening up the military to gays.  They now march in Pride Parades in full uniform and attend political rallies, a privilege never granted to the soldier of my day.  Obama and company has now imposed on the military the almost impossible task of fully incorporating women into the most intensely physical of combat fields.

And really, what does an oath mean these days?  The President took that same oath and has violated the very Constitution he was sworn to protect and uphold.  He lied about the shovel ready jobs and Obamacare and Benghazi and Fast and Furious and NSA spying.  He placed political ambition over enforcing our immigration laws.  So what good does it do to swear an oath?

The Congress is so corrupt that, when they get caught lying, they say they mis-spoke.  They cut back room deals and lie about it.  They vote legislation favorable to their own personal profit.  They too swear the same oath...on a bible..and say "so help me God" and it means nothing.

Our U.S. Postal service dumps our mail in the dumpster and steals personal and federal checks from  folks on their route.

Police and Fire and Municipal workers cut sweet salary and retirement deals with whatever rotten politician whose in office, sending city after city into bankruptcy...so public trust and institutional allegiance is no longer even a minor consideration.

So why should the military, the last public institution still valued and respected by the public, why should they swear an allegiance to a god, "god" with the small "g" since over half of America no longer holds our creator in high esteem either.  Let's let Mikey and Mike win this one too.

With any luck, with just a few more years of godless political leadership, if just a few more Americans abandoned even the concept of a God, a creator, we'll all being lying, cheating, corrupt and godless people and there will be no need for a ticket to hell...cause we'll already be there.

I just want to add one more thing about this God thing.  I've had Ak-47 rounds fly right past my nose.  I've had North Vietnamese 122 rockets explode within yards of me and felt the whoosh of flak flying over my head.  I've lay in the middle of rice paddies on listening post duty, with nothing but a "transmit only" radio, I've been struck by lightening while guarding B-52's in lightening storms..and I will tell you this...my first thought was a silent prayer "God, let me live through this!"

So they can drive God out of the military all they want...but when the shit hits the fan God will be taking the calls from every "field of terror".

My Friend, you can put yourself down for an "A+" for that one, that went straight to my facebook page.

Every time God is removed from an oath, that pledge loses its power and integrity. When we make a promise to the Almighty as in "so help me God", we are entering a contract with the most powerful entity in the Universe. When that is removed, well heck, might as well step out and abort a few babies and kill a few liberals.

In order to demand that God be stricken from all things American, the liberal should be required to prove that God does not exist. Now I can't absolutely positively say He does exist but conversely I am completely certain the idiot liberal can't prove that He doesn't!! When the time comes I want to be on the right side of that conversation, and I have the faith to know I am.

Tit for Tat, Ken...this is one of your best responses.

I could not agree with this poster more. I love God and do not want him removed from my life. But society at large seems to. That being the case, I will hold onto Him much more tightly. When the storm comes, we will see who pulls through. The more God is taken out of American life, the worse life in America becomes. It is not so fun to be American anymore. Our country has committed adultery with the world, and a day of reckoning is coming, so help me GOD!