On A Hill Stood An Old Wooden Cross 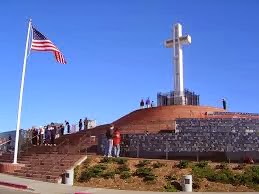 It sits on a modest hill along the Southern California coast.  The hill, modest by even California coastal range standards, stands only 822 feet high.  Situated between California Freeway 5, the main north-south California corridor, and the Pacific Ocean, Mt Soledad has been an irritant to atheists who decided to become offended about a cross that stands atop the mount.

The cross was built in 1913 as the town of La Jolla's gratitude to a creator who had blessed them with beautiful weather and the great natural beauty of the southern California coast.  It was simply a modest wooden cross that stood for half a century without controversy.  But, as more and more atheists traversed highway 5, en route to a wild weekend in a Navy town, or bound for Tijuana for one of those notorious "girl and donkey" shows,  they became more and more irritated by this brazen display of Christianity.  So they took their complaints to the only place atheists ever win; to the American courts.  They claim it is an affront to have a religious symbol on government land.

Those who support the cross atop Mt. Soledad tried everything to appease the angry atheists.  As early as 1954 they established the site at the cross as a memorial to our military.  A newer and more permanent cross was erected.  And those who are offended by a cross became even angrier and the case worked its way deeper into the courts. 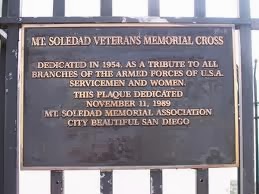 Seeing that the liberal California state courts would side with the atheists, the land was ceded to the federal government in hopes that they would preserve and protect a memorial dedicated to those who fought and sacrificed for their country.  And for awhile, under a conservative administration, it looked like the cross might be preserved.

Alas, the ultra liberal U.S. 9th Circuit Court of Appeals out of San Francisco decided that the cross was an affront to atheists who believe religion is for the ignorant and the cross but a unpleasant reminder of such ignorance.  They ordered the cross be removed to spare atheists forced to look at it as they motored down Freeway 5.

Supporters of the cross tried one last desperate maneuver to save it.  They offered to buy the land the memorial stands on  from the federal government.  However, the Obama administration has stated they will not entertain offers from a 'favored party' interested in preserving the cross.

Sadly, today, two weeks before Christmas, a federal judge has ruled that the Mt Soledad cross must be removed within 90 days lest it offend the eyes of the nonbelievers.

Airline pilots say they use the landmark of Mt Soledad to guide them into their descent into the San Diego area.  Others, not offended by a cross, have found the landmark to be uplifting, a landmark to their own spirituality.  Alas, the cross is now in its last days…..and so is our once marvelous country.
Posted by A Modest Scribler at 9:02 AM

My prayer is that this story will reach thousands with private land within easy sight of freeways and other public venues who might erect replacements. My support and my donations would be theirs for the asking.

This is just another horrible thing that makes me want to "PUKE". Somewhere in all of this us "GOD FEARING" Americans need to stand firm like never before and tell all of those Son's of Bitches to take a hike.
I am appaled to say the very least.
DAMMIT!

I have been venting on this all morning. After days around my Uncle Jack's pool or at La Jolla cove we would drive up there to look over the extraordinarily beautiful view. Been going up there for over fifty years. I love it. It was once privately owned so no govt could mess with it, but I guess it got too expensive to maintain. If all the people screaming out against this cross, (I understand it's only two this time and the atheists found two vets, which surprises me, I thought vets were fairly religious)and it's been many over the years, would just go visit the cross they would see the stupidity of the argument. The cross has been adorned by a concrete walk and stone retaining walls along that walk. In the walls are embedded hundreds, maybe thousands now, pictures of soldiers from all our wars, some with their families, some with beautiful testimonies from the families or the soldiers themselves. Bob Hope has one along with Winston Churchill. For some odd reason Martin Luther King is honored there, I don't know the reason why he was other than a lawsuit forcing it by liberals, I don't think he was a soldier in our armies. There are several tributes to soldiers of various religions with the symbolism of those religions prominently displayed. The Cross being the largest symbol displayed. This cross has stood for nearly seventy years and people have been visiting in droves its entire existence. Any day of the week you will walk up to the cross in a long line behind others paying tribute. To place the pictures and testimonies embedded in those walls is not cheap, the families of several suffered hardship just to honor the Vet in their family here. To force this sanctuary to be violated by this trash is just beyond my comprehension. I am becoming so disgusted with this entire country. When the fuck is the war here going to start?!?!

By the way, Mt. Soledad is built along the famous, El Camino Real! Translated "The King's Highway" and this doesn't mean the King of England or Spain. It is God who is honored here and that road runs the entire coast of Kali first established by Father Serra, a Franciscan Monk,with a Catholic Mission house within a days walk of each other meant to house the weary traveler of a couple hundred years ago. These missions are maintained by Kali should those be taken down too?? This is our history, it is who we are. Fuck you people trying to rewrite that history. In doing that you will surely lose your country!