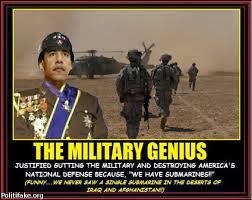 Well, America better step up their robotics technology darn quick, because Obama's outright assault on the military all but assures us that we'll not be able to recruit enough men and women to fight a minor drug cartel uprising in Mexico very soon, much less be prepared for a "two and a half war" scenario.

Just this week we learned that Obama has directed the Department of Defense to draw up plans to close the military commissaries located at 271 military bases in the country.   He also plans to shut down the century old Stars and Stripes Newspaper and the Armed Forces Radio and Television Service.

Let me present my case on why these are not only bad ideas; they also represent three of the least costly DOD programs in existence.

First of all, I truly believe Obama's assault on military practice and tradition is simply part of his overall attack on all American institutions; it's all part of that hope and change stuff and fits well with his life long campaign to turn America into a Socialist state.

Now, somewhere Obama and his minions have found a billion dollars that is somehow channelled into the commissary system.  I don't know where that figure comes from,  unless it is some high up federal bureaucrats on the payroll somewhere, but let's suppose it's correct.  That $1 billion dollars is nothing but an accounting "rounding error" if it were part of Obama's massive $400 billion dollar welfare program.  Anyway, Obama wants to kill the commissary so I guess it will be done…and again, perhaps without approval from the Congress.   The Defense Cost Analyst in charge of the program cuts says these cuts can be done under the mandatory sequestration cuts already mandated.  Oh, and by the way, 30% of commissary employees are military wives so we can expect these employees to file for an unemployment check which will cost far more than the spare change that was going toward commissary operations.

Next in line for the chopping block is the Stars and Stripes Newspaper.  Again, this program is manned by military members who are being trained to be journalists, news photographers, copy editors, and the like.  It puts out a tabloid size paper every morning, seven days a week, and offers an objective reporting of the world as well as service news to the troops.  The newspaper was often delivered on the same pallet as the bullets..and the troops were kept informed.  The Stars and Stripes has survived The Civil War, The Great Depression and World War II and Korea and Vietnam and the Middle East Conflicts…but I guess it's not part of Obama's legion of main stream media admirers so it's gotta go too.

Finally, Obama will end over 75 years of the Armed Forces Radio and Television Service.  This service has carried news and entertainment to our troops on the most remote Pacific Isle, to both the north and south poles, to remote jungle bases in Vietnam, to the deserts of Arabia.  Radio and television journalists are, again, solely military members who are training to be journalists and radio jocks.  The military members who fill these positions don't receive a dime of extra pay for these duties and AFRTS is a godsend to our troops overseas.  Hollywood has always freely provided free TV programming so that our troops could watch what folks back home were watching and the U.S government has never paid a dime for these programs, including getting to watch football and baseball and basketball.  You have no doubt seen live shots of those troops watching a football game from back home…those shots are coming directly from AFRTS.

Folks, I cannot tell you how badly all of this hurts me.  I wrote a few weeks ago about Obama's never ending tentacles weaving their way into every facet of American life..and destroying it…and this is no different.  Obama frequently commandeers a group of military to stand in front of and promises we'll not be forgotten, even as the VA waiting lists extend to over 8 months just to see a VA doctor, or the fact that the scary VA hospitals have literally killed our vets through bad medical practice.  And it is the Socialist slug Obama who purges 197 senior military officers who have threatened to blow the lid off of Benghazi, or who refused to stand down during Benghazi or who have refused to sign a pledge to fire on American citizens if ordered to do so by their Commander in Chief, to the Obama who forced our senior staff to swallow openly gay service, a swallow every bit as impressive as a John Holmes movie, to forcing our first line combat unit to lower standards to accommodate women on the front lines when it is clear they cannot meet the physical standards.

Well, the war is on and Obama is clearly winning it…I fear that even our 240 year old military institutions won't survive another three years of Obama.
Posted by A Modest Scribler at 2:00 AM

The military has always justified the low base pay of service members, by continually reminding everyone of the "benefits" that make up the difference in the money not paid. Those benefits included the Commissary, Free Medical and Dental while in the service and also if you retire. I spent 25 years in the Army as a pilot and when I retired in the mid 90's, my base pay was $3200 a month compared to Airline Captains that were making $20,000+ a month. BUT I had ALL those great benefits! Well, the Commissary looks like it is going away, the Class 6 went away in 1970, the PX/BX had to start supporting the MWR (moral and welfare fund) in the 1980's and thus became more expensive than Walmart, the Free Medical and Dental went away even before I retired.

If the economy ever improves, which is doubtful, it will be impossible for the military to get volunteers in any branch of the services. Even today, a brand new recruit in the military makes $1402 a month base pay, just a few dollars more than a new hire at McDonald's. Of course, the McD's employee only works 40 hours or less a week. That brand new recruit is doing closer to 70..and with only the Commissary left as a benefit....until it too is gone.

This will obviously make the military a very unattractive career move. He has taken down the leadership who might fight these changes and now low level family supports. All I hear is how military families and Vets can't survive without Medicaid or welfare and food stamps which is shameful enough now this. Fuck this guy. I just watched "Parkland" a story of the JFK assassination and the following three days, probably the arguably the last decent democrat. I remember my uncle really partied hard when he heard of JFK's killing, talking of all the damage he was bringing to our country. Well now, I think I'll be heard saying the same when I hear of obama's prayed for, well you know, the "A" word. He is the worst enemy this country has ever seen.

I would like to start by saying I spent 6 years on active duty and am still currently a reservist. I have deployed to Iraq twice. I appreciate everyones service that came before me, however...

These programs getting the axe are by no means the worst thing that could happen to the military. Most of those employees are relatives of spouses not spouses themselves... I chose to shop at Walmart or local grocery stores for budget reasons and selection when I had a choice. I will be glad to see them go. Its not about how much they cost but rather what service do they provide. AAFES we go where you go, unless where you go is on the worlds most dangerous road in the world and gets mortared alot... then we will refuse to leave the airport but still make 8 times more than the average soldier for just being in country.

As far as Stars and Stripes and AFN goes the last time I saw either one I was in Korea 8 years ago. The availability of the internet has made pretty much obsolete.

Cutting these programs was suggestion by a bi-partisan committee that actually recommended further cuts to include a move to a 401k matching system rather than a pension system. Nevermind the fact that Federal civilians that outnumber the military get both but they have a union.